Years ago, I needed some practical help. A person close to me—someone who had the ability to lend a hand—saw my need and said repeatedly, “I wish I could help, but I can’t. I feel so guilty.” That guilt did me no good. Instead of feeling supported, I felt resentful.

Anxiety about change abounds. It is a natural response to uncertainty, but I tire of reading about it.

My church experience has included at least 13 Mennonite churches, a Baptist church, an inter-denominational church and two Catholic schools. That represents more worship services and Sunday school lessons than I can count! Not many details from the sermons and classes stick in my mind, but those experiences taught me many lessons over the years. Here are a few.

It’s been a good eight-year ride, my friends, with a few bumps along the way. I will miss this biweekly meeting with you on the second page of Canadian Mennonite. While it’s been a monologue, I have felt it had the makings of a dialogue, of one friend sharing thoughts with another friend. I have tried to make it more of a conversation than a lecture.

“While Anabaptists affirm the inspiration and trustworthiness of Scripture, we are not strict literalists,” writes Palmer Becker in his just-released book, Anabaptist Essentials.

“The times, they are a-changin,” belted out singer-songwriter Bob Dylan in the mid 1960s.

It is with heartfelt gratitude that we thank and recognize the generosity of the 835 donors, including 45 new ones, to our 2016 spring and fall fundraising drives that brought a record $119,403 into our coffers toward operating expenses and our endowment fund.

The tension in the room was palpable. High winds and blizzard conditions outside kept some from attending the Fort Garry Mennonite Fellowship meeting in Winnipeg (see “Let him speak,” page 18), but the stormy weather on Jan. 12 was not confined to the outdoors. 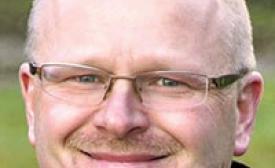 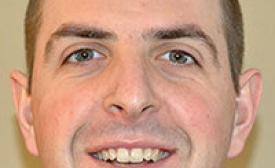 At the end of every year, I get together with a group of friends and we discuss our favourite music that came out in the previous 12 months. As a starting point for the discussion, each of us creates a list of our 10 favourite albums of the year.

This year—2017—will bring changes for members of Mennonite Church Canada, a denominational entity to be reconfigured into a proposed structure of five area churches doing the work of a denominational centre in Winnipeg. It is uncharted territory, to say the least.

If ever we needed to hear “Emmanuel” (God with us), it is during this Advent season as we wind up the year 2016. With violence prevailing in war-torn countries, and political upheaval changing the face of our neighbour to the south, not to mention changes in our own denominational structure, we seem to be groping for a divine peace like never before.

When the diagnosis of dementia hits you up close and personal, as it has me with the decline of my spouse Marlene due to the disease, it sends you on a grief journey that clouds your perspective on life. The questions come fast and furious.

The pastors of Mennonite Church British Columbia got together recently in a closed meeting to discuss their response to the Being a Faithful Church 7 resolution passed at Assembly 2016.

Of all the current global conflicts, none seems as intractable as the Israeli-Palestinian one, pitting an occupier government against its occupied residents.

We are pleased to announce that the family of the late Ted Friesen, the first publisher of The Canadian Mennonite, has agreed to set up—and seed with a $50,000 gift—a fundraising initiative that we are calling the Ted Friesen Legacy Fund.

We will miss her and her passion for justice as a young mother trying to make sense of the complexities of our world in the 21st century. Katie Doke Sawatzky wrote her last New Order Voice column in our September 12 issue as she embarks on full-time studies in journalism.

On his Aug. 11, 2016, podcast, journalist Malcolm Gladwell used the concept of “generous orthodoxy” to frame the story of Chester Wenger. It’s a positive approach to faith that is gaining ground among Mennonites.

It’s been a couple years now, but the experience stands out in my mind as if it were yesterday.

Engin Sezen, executive director of the Waterloo, Ont., Intercultural Dialogue Institute, invited my wife Marlene and me to share a meal with his and his brother’s families after dusk during Ramadan.

In reflecting on Assembly 2016 in Saskatoon, one thing is certain: We are entering a period of uncertainty in the life of Mennonite Church Canada and its area churches. The most hopeful sign in this state of affairs is that the delegates had enough faith in our leaders to begin a new process with few specifics.

“By the rivers of Babylon we sat and wept when we remembered Zion. On the willows there we hung up our harps” (Psalm 137: 1-2).

What will be the tenor of the conversation at Assembly 2016 in Saskatoon? Writing this 12 days before more than 500 delegates and denominational leaders gather to consider multiple heavy issues, we can only imagine.

We expect a lot from our pastors, especially the part-time ones who are forced to be bi-vocational. They speak candidly about their roles and their congregation’s expectations in this issue beginning on page 4, as interviewed by our Saskatchewan correspondent, Donna Schulz.

Prospects for an intense conversation on several issues appear to be gaining traction for our upcoming assembly in Saskatoon in July.

She is more than my spouse and partner of 54 years. She was my soul mate; the person whose love and devotion never faltered; the one to whom I turned for counsel, for wisdom and for comfort.

The draw to our Anabaptist/Mennonite theology just keeps happening.