A new shepherd for MWC

The presidency of Mennonite World Conference (MWC) transferred from J. Nelson Kraybill (2015 to 2022) to president-elect Henk Stenvers (2022 to 2028) at GITJ Margokerto, Indonesia, as part of Assembly 17. Margokerto was one of the first colonies founded by Mennonite missionary P.A. Jansz for the evangelization of the region. The church hosted a dozen MWC guests for four days during Assembly 17 and broadcast the plenary speaker from this satellite location to the main stage at STT Sangkakala in Salatiga on July 8. “Our global church is deeply grateful for the ministry of Nelson Kraybill during these seven years,” said César García, MWC’s general secretary. “We will miss his pastoral heart, wisdom and willingness to serve unconditionally.” Incoming president Henk Stenvers has served a decade as Deacons Commission secretary, during which time he pioneered Online Prayer Hour and has served Algemene Doopsgezind Societeit (the Dutch Mennonite church) and the European Mennonites for almost 20 years. “Henk’s experience as a church leader in the Netherlands and his knowledge of the world church will be a great blessing in the years to come,” Garcia added. “It will be a privilege to work with him.” 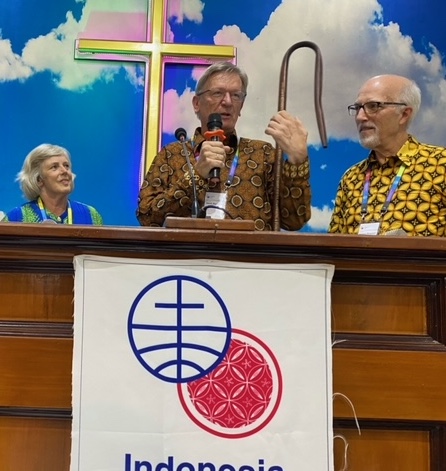 Henk Stenvers of the Netherlands, second from right, is the new president-elect of Mennonite World Conference. He succeeds J. Nelson Kraybill of the United States, right. Also pictured is Miekje Spoelder, the chair of ADS, the Dutch Mennonite church. (WMC photo)