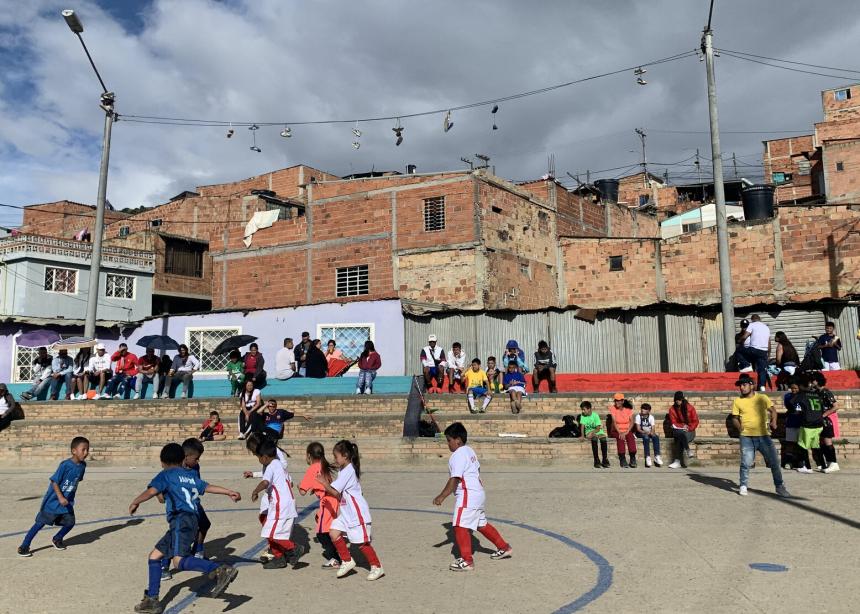 Each summer for the last four years, a community on the outskirts of Soacha, Colombia, has gathered to watch its children play in a soccer tournament for peace, their own local version of the World Cup.

In Soacha, where many families have experienced conflict, displacement and violence, Creciendo Juntos (Growing Together) offers children and youth after-school tutoring, activities and workshops on themes of peace and nonviolence.

The staff at the organization, many of whom are students at a nearby university, run a variety of programs year-round. From games to academic support and specialized activities like a workshop on violence against women for International Women’s Day, everything that goes on at Creciendo Juntos imparts a message of peace.

One of the most popular activities of the year is Mundialito por La Paz—Little World Cup for Peace. This past summer, the event drew 81 children from ages 6 to 17.

“Soccer is so huge in Colombia,” says Clara Unzicker of Benson, Ill., who is serving in Colombia through MCC’s Serving and Learning Together (SALT) program as a child and youth worker with Creciendo Juntos. “These kids are already spending so much of their free time playing anyway. And all of the activities at Creciendo Juntos are related to peace and nonviolence, so Mundialito is a way of combining the two.”

In the weeks leading up to the tournament, participants practise with their teams, divided into three age divisions. They also learn about conflict resolution, teamwork and nonviolent peacemaking.

The tournament begins with an opening ceremony that is well-attended by families and community members. Children wear uniforms donated by the community, every team in a different colour to represent the country teams that play in the World Cup. Teams line up to make a grand entrance, proudly displaying the flag of the country whose team they are representing.

Each team is announced on a loudspeaker as music blares, and they enter to a cheering crowd. At the end of the Little World Cup for Peace, each of the three age divisions has a champion. 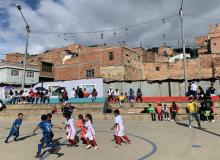