‘Both despair and hope have come to life for me in deeper ways,’ says Kari Miller 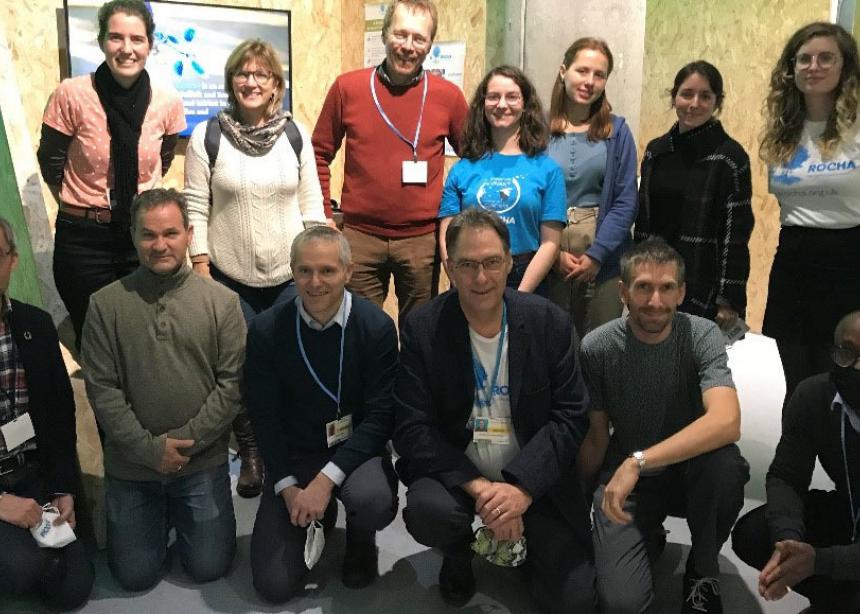 Kari Miller (back row, far left), pictured at COP26 in Glasgow with A Rocha representatives from across Canada, France, the U.K. and Ghana. (Photo courtesy of Kari Miller and A Rocha Manitoba)

Kari Miller is the environmental education coordinator for A Rocha Manitoba and attends Home Street Mennonite Church in Winnipeg, Man. She attended COP26 in Glasgow, Scotland, from Nov. 5 to 12, 2021, as part of the Christian Climate Observers Program. I spoke with Miller about her experience at COP26, what she witnessed and what role she believes the church plays in the climate crisis.

This interview has been edited for length and clarity.

Q: Can you describe the work you do with A Rocha Manitoba?

Kari Miller: I plan and implement curriculum for kids in outdoor education and nature-based learning. We run a drop-in program every Tuesday and a day camp on PD days for kids in the neighbourhood. We do outdoor scavenger hunts, teach wilderness skills like fire-building and fort-building, explore the Assiniboine Forest. We get them outside and curious about exploring their place.

Q: What was your overall impression of COP26?

Miller: It’s definitely overwhelming. There’s a lot of people. I’m not well-versed in politics so it felt like learning a language. I had a badge as an observer that allowed me to enter spaces where countries were negotiating. Those meetings were fascinating to hear but also hard to understand as someone from civil society.

But overall I was impressed with how powerful civil society is. I met a number of inspiring folks who work with different A Rocha chapters around the globe. One person, Rachel Mander, has committed to not fly because it produces so much greenhouse gas. Before COP26 she did a 1,000-mile pilgrimage where she walked from the southern tip of the U.K. where the G7 summit happened all the way up to Glasgow to bring awareness for the climate crisis.

On my final day there, on Nov. 12, many were frustrated that big decisions weren’t being made at COP26, that countries weren’t committing as much as people had expected. Some were calling COP26 a failure. At noon around hundreds of people (including observers) walked out in protest from the negotiations, demanding more from COP. COP then proceeded to continue into Saturday and the Glasgow Climate pact was created. I think this walk-out was a big part of that. It pressured politicians and parties to make decisions and commitments.

Q: What was your day to day experience like? What did you do?

Miller: I went with a group called the Christian Climate Observers Program. CCOP is a coalition of Christian NGOs that came together and sent about 40 people as observers to the COP26. We stayed at a Bible retreat centre just outside of Glasgow. Each day we got up, had breakfast together and then did morning devotions. Then we caught the train into Glasgow.

There are two COP venues. The Green Zone is open to civil society; it has booths from a variety of NGOs, artwork, technology and panel discussions available to everyone. You need a pass to enter the Blue Zone. There’s two massive screens with a continual rolling schedule of all the meetings happening that day and what rooms they're in. You plan your day based on that list. The meetings happen from 8 a.m. to 8 p.m.

Q: You mentioned the walkout that was important towards the end of the conference. Was there anything else that was a memorable moment for you or significant?

Miller: One of the most powerful moments I experienced was actually with the Quaker Church. It was right before COP. I had participated in the climate strike on Saturday, Nov. 6. It was cold and wet and raining and I accidentally stumbled into a Quaker church where there was a group of older women sewing patches onto a quilt. The patches showed the ways they cared for the environment. I went back the next day and actually helped them to create more patches. It was this beautiful moment of older women standing in solidarity in their own way with people fighting against the climate crisis. It was impactful to see the wide variety of ways that people engage. These women weren’t going to COP but they were standing up in their own way and making commitments in their own lives.

Q: Can you give me an example of what was on the quilt those women were putting together?

Miller: The quilt was part of the Loving Our Earth Project. One quilt piece was titled “A Hurricane called Grace.” Hurricane Grace swept through this person’s community and the pattern shows the hurricane. The story behind the patch is about how their community stepped up to help after the storm. It was her pledge to continue to work towards helping people affected by natural disasters, which have increased due to climate change.

Q: Any other moments?

Miller: On Saturday, Nov. 13, many of the political leaders gave powerful speeches explaining how the climate crisis was affecting their countries. They are fearful their countries will become more vulnerable to natural disasters and they want to make the world a better place for their children.

I found these speeches incredibly moving and hard because in the end the Glasgow Climate Pact didn’t live up to everything these leaders were hoping for. The target was to keep the global warming temperature at 1.5 degrees Celsius. The Pact moved that up to 2.4, which is dangerous for certain island countries that are threatened with being washed due to rising sea levels.

Q: In the reflection you wrote before you left for COP26, you talked about feeling anxious because there was so much expectation placed on the conference. How do you feel now that you've had an inside look at what happens at a conference like that?

Miller: Both despair and hope have come to life for me in deeper ways. Despair in the sense that the climate crisis is so much more real, now that I have heard those stories. Hope in the sense that I see action being taken—the women from the Quaker church who are quilting or Rachel Mander who walked across the U.K. That’s where I’m reminded that there are people doing things to make change. Through them I’m reminded of our God who continues to create and redeem and I’m reminded of how nature is resilient through it all.

Q: What role do you think the church plays in the climate emergency?

Miller: Just as I was describing hope, the church offers hope in a lot of ways. We can so easily look at numbers and feel the world slipping underneath our feet but the narrative of a God who still cares, is still present with us and is still redemptive, is huge in reminding us that our actions matter. The church offers liturgies of lament for us to be able to say, wow this is scary and this is hard. In the grief of the cross we can acknowledge our grief over the natural world. But then there’s the resurrection and I see in so many ways that we’re continuing to push and to love and to see God’s hand at work in this climate crisis and believe there’s a better world on the other side.

The climate crisis is also a crisis of injustice because global warming disproportionately affects developing countries who are already vulnerable. The role of the church is to come alongside, to love our neighbours and to take care and walk with those who are more vulnerable.

Q: What do you take back to your own church community from this event?

Miller: If we aren’t willing to act as individuals, then bigger policies will never actually change. When we participate in action, whether through little choices or by being part of climate strikes or bigger movements that pressures policymakers into making greener choices. That’s what I hope to bring back to the church, a reminder that our actions do matter in the end and to encourage everyone to keep making those green choices and keep building their relationships with the Earth.

Kari Miller (back row, far left), pictured at COP26 in Glasgow with A Rocha representatives from across Canada, France, the U.K. and Ghana. (Photo courtesy of Kari Miller and A Rocha Manitoba)