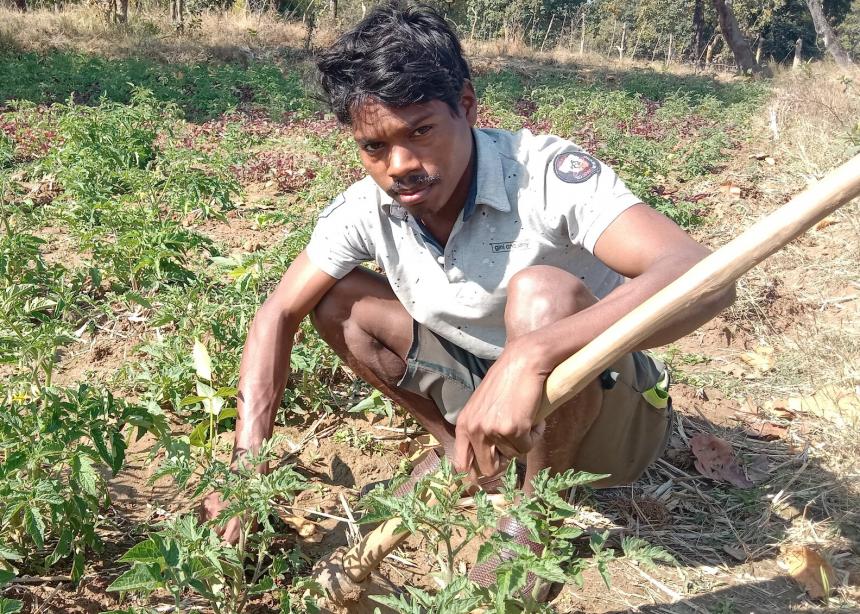 Santosh Birhor works on his kitchen garden tomato plants. Through the support of CASA, an MCC partner, he has been able to drastically increase his yields and plant more diverse crops. (Photo courtesy of CASA)

When thinking about migration, it is easy to focus just on resettling refugees fleeing conflict or disaster. But the work Mennonite Central Committee (MCC) does with migrants isn’t just about resettling those on the move. Hundreds of millions of people are migrant workers, seeking higher-paying jobs far away from their families and homes. MCC partners all over the world work with migrants not necessarily to end migration, but to ensure all people have options, choices and the right to stay or go as they want.

“Migration is an incredibly complex problem to address, as every person’s situation is unique,” says Deepti Bhattacharjee, MCC representative for India. “A one-size-fits-all approach simply does not work. But MCC and its partners are committed to ensuring every person has the right to stay where they'd like and the right to go where they want.”

Santosh Birhor can now support his family at home

Santosh Birhor hated leaving his family behind. But every year, he didn’t really have a choice. If he didn’t leave to find work, his family could barely afford one meal a day. From the year he turned 15, he would leave everyone he knew behind for most of the year, sending money back home to give his family a chance to survive.

But when an MCC partner called the Church’s Auxiliary for Social Action (CASA) began an agriculture project in his home village of Koilary, India, he was given something he hadn’t had before—the choice to stay. Birhor says that what he learned from CASA has made it financially possible to farm his own land.

“Before joining CASA, I would get two to three bags of rice from one paddy field,” he says. “But with all the things I’ve learned, now I’m getting 20 to 22 bags from the same field. I’m also growing different crops, like millets, pulses and vegetables too.”

In addition to the techniques that increased his yields, CASA teaches farmers like Birhor related skills like making chemical-free pesticides using local plants and biowaste produced by their farms. With all he’s learned, Birhor believes that he won’t have to leave his family for work again.

“I have been so happy to work with CASA because I learned things that I never learned from my father or grandfather,” he says. “And now that we’re getting enough food in the village, I am excited to be able to stay with my family.”

When he was 18, Noor Hassan decided to leave home to take a chance in the city. He moved 2,000 kilometres to the city of Pune and found a good job at a bookbindery. Over the next decade, he built a life he was very happy with. He met and married his wife, supported her as she finished her education and continued to send money home to support his family.

It was only when India’s sudden and strict COVID-19 lockdowns came into effect that Hassan’s livelihood was threatened. He held out for a few months, dreading that he’d have to empty his savings to try to outlast the pandemic. Ultimately, he felt he had no choice but to return home.

Hassan had inherited some land from his father, but had little experience as a farmer and even less desire to be one. He wasn’t very hopeful about his future working the land and he didn’t have any other options.

But Hassan was given new hope when he returned to his home village of Jharbari in the form of the Islampur Ramkrishnapally Rural Welfare Society, an MCC partner. Like CASA, the welfare society supports rural farmers to give them a chance at making their farming a viable long-term option. Hassan took training that helped him understand how to farm effectively, increase his crop yields and learn to raise goats.

As he learned more from the society, he was able to take the savings he had left and buy some land to open a small store called the Lockdown Market in the village. When he isn’t farming, he operates the shop as part convenience store and part pharmacy for the village, saving many of his neighbours long trips to nearby towns or cities for simple necessities.

The core of the society’s work is to ensure people have the tools and training necessary for them to earn enough money to provide for their families. That means they aren’t forced to migrate for economic reasons, but are free to make the choice to leave if they want to.

“The people who migrate to the cities, they have many difficulties, but they have to migrate because they don’t have any option in the villages,” says Hassan, 36. “I liked my job in the bookbindery, but I can’t do it right now. I only have the choice to do agriculture in my village now. After the lockdown period is over, I hope to return to Pune to work.” 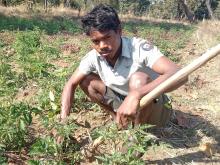 Santosh Birhor works on his kitchen garden tomato plants. Through the support of CASA, an MCC partner, he has been able to drastically increase his yields and plant more diverse crops. (Photo courtesy of CASA)