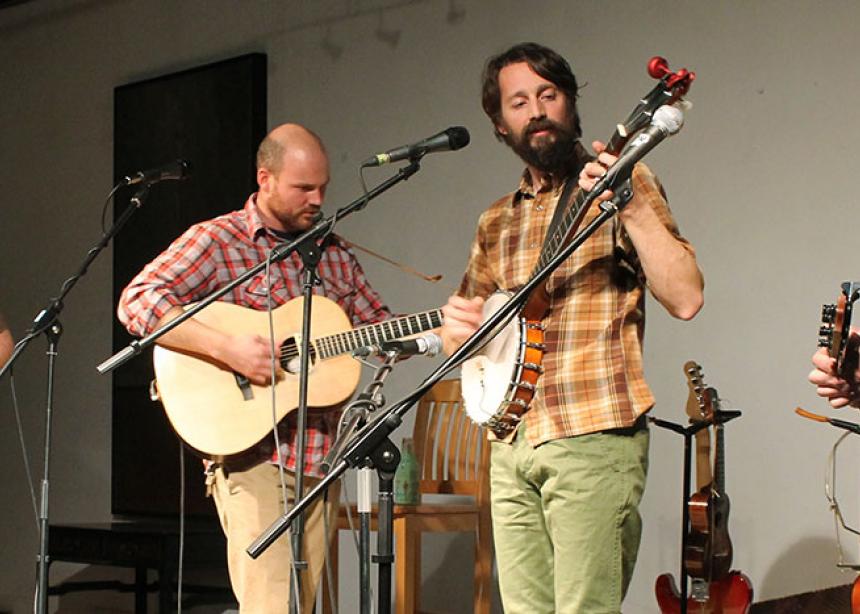 When Jordan Weber began making visual art four years ago, he wanted a new way to express himself.

“I never expected my art to be on display for anybody to see,” the 24-year-old said. “It’s super exciting that people have been coming up to me and saying they like my work.”

Weber was one of 20 artists who displayed their work at Exchange Community Church in downtown Winnipeg as part of Mennofolk, an annual display of art and music stemming from the Mennonite community in southern Manitoba.

Held on April 10, the 2015 edition of the event featured artwork relating to the theme, “Interaction/Isolation.”

Brent Retzlaff, chair of Mennofolk’s six-member organizing committee, said they chose “Interaction/Isolation” because they felt it was a theme that all Mennonites could relate to, and at the same time would allow participants to interpret in various ways.

“Every year we present a new theme,” said Retzlaff. The committee chose the “Interaction” portion because Mennonites have historically often formed tight-knit communities in which they interact with each other. At the same time, the committee chose the “Isolation” portion because Mennonite beliefs, behaviours and dress can isolate them from the wider culture.

“We wanted to kind of explore the ways in which Mennonites feel isolated from the community,” he said, pointing to one of Weber’s two pieces, a mixed-media artwork called “Mennofag,” as a prime example.

Consisting of a cracked white mask laid on top of a canvas covered in Bible verses written out in black paint, “Mennofag” depicts Weber’s struggle with being a gay man in the Mennonite Brethren church he grew up in. “It took [the theme] in a different direction than I would have taken it,” Retzlaff said. “It’s one of the more hard-hitting pieces we have this year.”

The artwork encompassed a vast array of media, including acrylic, oil and watercolour paints, as well as linocuts.

Jesse Krause, a Winnipeg musician and artist, submitted two homemade instruments, including a “psaltree,” a harp-like instrument made of wood, metal, plastic foam, hardware and duct tape. Krause has participated in Mennofolk for the past 10 years, both as a visual artist and a musician, and described the annual event as a community-bonding experience. “It’s a proving ground for young Mennonite artists,” Krause said.

The exhibit also featured a reading nook where people attending the event could sit down and read short stories that had been submitted to the exhibit.

As well, the organizing committee created an isolation booth similar in shape and size to a telephone booth. People could walk inside, one at a time, isolating themselves from the people around them. Once inside the booth, they could put on headphones and hear ambient noise that was being picked up by a microphone placed at the opposite end of the room.

“I like when people submit stuff that’s not in [a] traditional medium,” Retzlaff said. “We’re trying to showcase as many mediums as possible.”

Tyson Priebe, an acoustic guitarist who performs solo instrumental music, kicked off the musical portion of the evening. Well Sister, the latest project from folk singer-songwriter Jaymie Friesen, performed next, followed by a set from the WhizBang Shufflers, a folk/bluegrass quartet that first performed at Mennofolk Manitoba in 2005.

Clare Schellenberg, one of Retzlaff’s colleagues on the organizing committee, said she was pleased with the diversity on display. “Every year, there’s new talent,” Schellenberg said. “We have a lot of great artists and musicians, and I think we have to celebrate that.”

She added that the committee chose the downtown venue to make the event as accessible as possible, and also to draw in people of all ages.

Any artist who identifies with being Mennonite in any way was invited to submit work for the show, and the exhibit was meant to draw in people of all ages, from all walks of life, Retzlaff said. “The show is meant to showcase [Mennonite art] to the public,” he said. “We hope everyone feels comfortable here.”

The WhizBang Shufflers returned to Mennofolk after first performing at the event in 2005. From left: Donald Willms, Luke Enns, Curtis Wiebe and Rick Unger. (Photo by Aaron Epp) 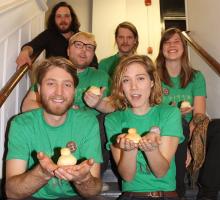 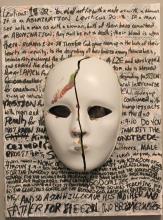 ‘Mennofag,’ a mixed media piece by Jordan Weber, depicts the artist’s struggle to come to terms with his homosexuality. (Photo by Aaron Epp) 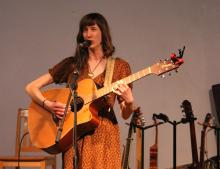 Well Sister, a folk group fronted by Jaymie Friesen, pictured, was one of three musical acts that performed at Mennofolk 2015. (Photo by Aaron Epp) 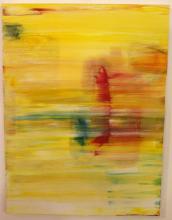 ‘Living in the Fast Lane,’ an acrylic painting by Danielle Fontaine Koslowsky. Twenty visual artists ranging in age from 18 to 55 displayed artwork at Mennofolk 2015. (Photo by Aaron Epp) 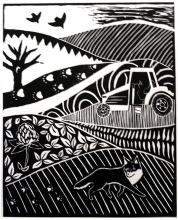 ‘To a Mad Farmer’s Manifesto,’ a linocut by Laura Tait. (Photo by Aaron Epp) 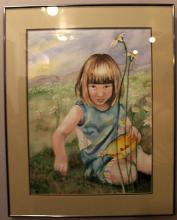 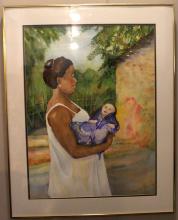 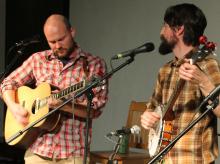 Luke Enns and Curtis Wiebe of the WhizBang Shufflers perform at Mennofolk 2015. (Photo by Aaron Epp)

I consider Jordan one of my closest friends. I lived with him last summer as he worked on Mennofag. One of the features of the piece which might be missed in seeing it online/ in print is if you look through the eye holes in the mask, there are mirrors that reflect the colourful paint on the inside of the mask.

When I look at Mennofag, I am reminded that as we get to know members of the LGBTQ* community we will discover that they have so much to bring to our community that is hidden behind the masks they feel they need to wear.