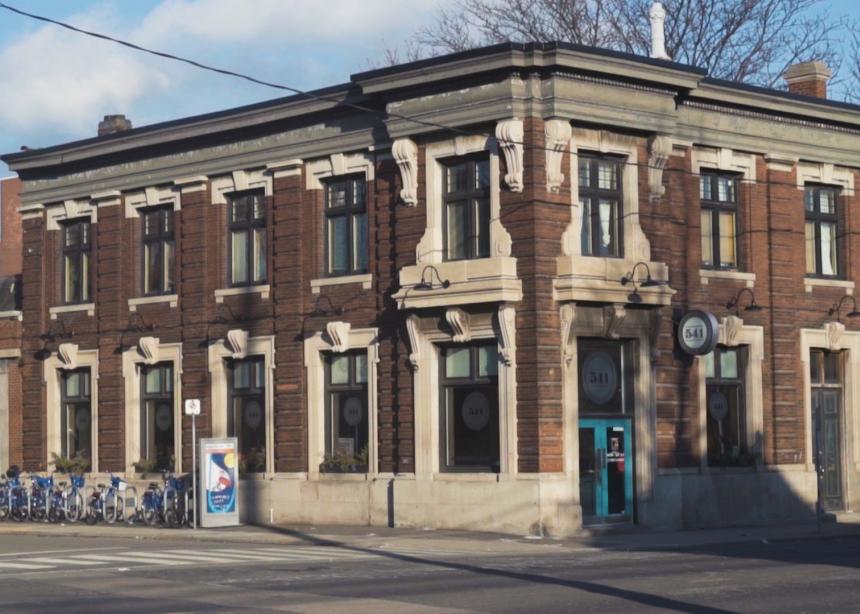 The Meeting Place meets at 541 Eatery and Exchange in Hamilton. (Photo courtesy of Facebook.com/541Barton)

Earlier this year, the Meeting Place, an urban church plant in Hamilton, Ont., joined Mennonite Church Eastern Canada and was welcomed at the annual church gathering.

The Meeting Place started about 15 years ago under the leadership of Sue Carr, formerly a Mission Services Hamilton chaplain.

At first they met in a back room of the Mission Services building on Sunday afternoons. A glass side door led to the street and, as curious people joined and numbers grew, they moved to a larger room and became known as the Meeting Place.

People began to come, usually men at first, hungry for the gospel and food. Initially no coffee or food was served, but people still came for Bible study. This time together always ended with the hymn “Amazing Grace.” Eventually a meal was prepared by the Mission Services staff.

As Carr says, "People came hungry and went away fed."

When the crowd grew to 60 or 70 people, with standing room only, a new location was needed.

About eight-and-a-half years ago, Carr helped to found a non-profit coffee shop, 541 Eatery and Exchange, housed in an old bank building on Barton Street in East Hamilton. The Meeting Place began meeting in the airy, welcoming space.

Before the pandemic, about 40 people gathered together on a Sunday afternoon, sharing a service and a meal prepared by the cafe staff. During the pandemic, services were sometimes held in a park or someone's backyard, weather permitting. On most Sundays, though, they met via Zoom, but not all members had access to computers and the internet.

Services have begun again at the cafe, although it is not yet open for indoor dining. The group is currently smaller, but Carr hopes the Meeting Place will grow in numbers again.

During the last two years the Meeting Place joined with the Commons, which was a former MC Eastern Canada congregation. Initially, both groups were going to worship together and share leadership of the services for one year. However, they only met one Sunday, which felt like extended family visiting, and then the pandemic closed all services and buildings.

Carr is retiring from her work at 541 Eatery and Exchange, and hopes to focus on more outreach with the Meeting Place.

Connections are being made within MC Eastern Canada. Students from Conrad Grebel University College, Waterloo, and McMaster Divinity College, Hamilton, have done internships at the Meeting Place, which is part of TrueCity, a movement of local churches seeking to bless Hamilton.

The Meeting Place meets at 541 Eatery and Exchange in Hamilton. (Photo courtesy of Facebook.com/541Barton)