MDS in Shenandoah Valley celebrates creativity of volunteers during pandemic 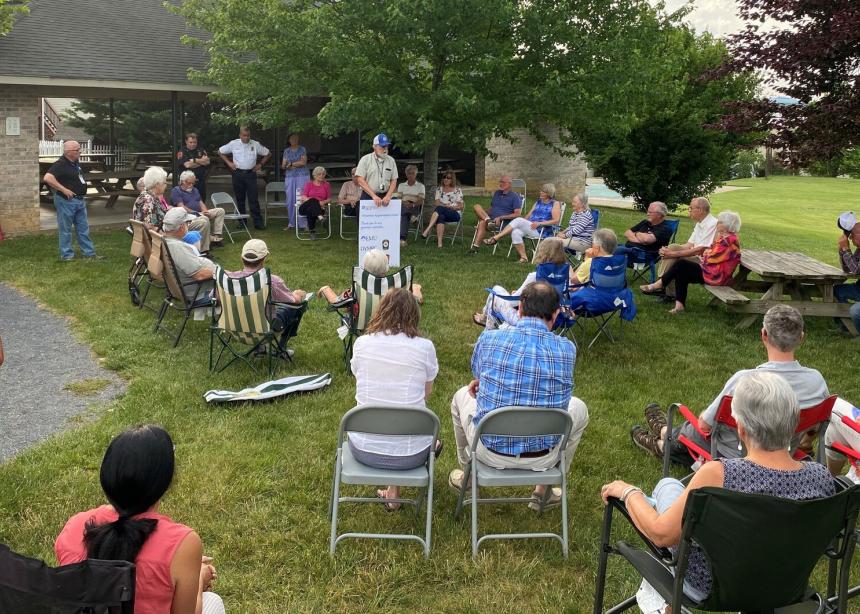 Dozens of Mennonite Disaster Service (MDS) volunteers in Harrisonburg, Virginia gathered for a picnic in May to celebrate the creative ways they had responded to community needs during the pandemic. Brimming with joy at seeing each other in-person for the first time in more than a year, they met to mark how more than 250 volunteers in the Shenandoah Valley had creatively and safely reached out to help their community.

At the picnic, local MDS volunteer coordinator Phil Helmuth thanked the volunteers and recalled some of the many ways in which they served. “They started off by making masks—thousands of them,” he said. “Then, right on the heels of that, the first responders in our area said they needed some personal protective gowns.”

The volunteers created a pattern for a gown made of Tyvek house wrap. “We had people who set up in their garage for a Tyvek cutting process,” he said. “They would lay a pattern on the Tyvek, and then they would cut it out. It was incredible.”

“We had both men and women cutting, and men and women sewing,” he said. “Some of them were folks who served on MDS projects before—but not all. We tapped into a whole new source of volunteers.”

During the first couple months of 2021, some students at Eastern Mennonite University contracted COVID-19, while others who had been exposed had to quarantine in local hotels.

“MDS volunteers delivered meals to 45 students twice a day for eight days,” Helmuth said. Volunteers loaded the meals onto a luggage cart at the hotel, then left them by the students’ doors. “We’d have someone go and knock on the doors and say, ‘Dinner!’”

After waiting for a minute or two, students would open their doors.

When COVID-19 vaccines began to roll out, volunteers shifted gears once again, with at least 40 of them helping to direct traffic at vaccine clinics in half-day shifts. When the City of Harrisonburg wanted to reach out to underserved communities, MDS volunteers distributed door-hangers with vaccine information in eight languages.

Now, as MDS volunteers are gradually shifting back into a normal routine. Some traditional work was able to continue despite COVID, as numerous groups assisted with home construction at various projects, and also plumbing repairs after the winter freeze in Texas.