In light of the highest level of refugees on record, Mennonite Central Committee (MCC) Canada is calling on individuals, communities, neighbours and faith groups to change lives through Canada’s Blended Visa Office Referred (BVOR) program. The program matches the most vulnerable refugees identified for resettlement by the United Nations Refugee Agency (UNHCR) with private sponsors in Canada; the Government of Canada gives up to six months of income support. The new $2.5 million 2019 BVOR fund will provide qualifying sponsoring groups with an additional six months of support for the resettlement of up to 3,000 refugees approved by the Government of Canada for resettlement through the BVOR program this year. This fund is a time-bound funding source that will cover the sponsor’s portion of the BVOR sponsorship costs. Groups will be responsible for securing funding or in-kind donations to cover start-up costs such as clothing and furniture. Sponsors can apply for the funds until Aug. 31 or until the fund is exhausted prior to the deadline by email at bvorfund@refugeehub.ca. Refugees sponsored with the support of this fund will arrive in Canada before December 31, 2019. MCC has launched the #ChooseWelcome campaign (choosewelcome.ca) to tell the stories of refugees in need, sponsors who have been involved, and newcomers who continue to make a positive impact in our communities. 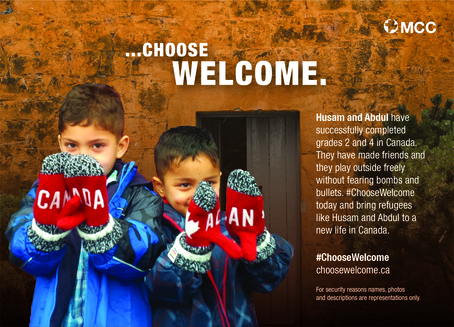 This postcard is part of MCC's #ChooseWelcome campaign.