Glen Guyton was installed as executive director of Mennonite Church U.S.A. on Aug. 18, 2018, at College Mennonite Church in Goshen, Ind. The service celebrated the beginning of his tenure, which began on May 1. Guyton is the first African American to serve as executive director of MC U.S.A. His installation marks a significant moment in the denomination’s history. Bishop L.W. Francisco III and Titus Peachey, two spiritual leaders whom Guyton credits as teaching him what it means to be an Anabaptist Christian, led parts of the installation. Peachey reflected on walking with Guyton as he discerned a decision to leave the military as a conscientious objector. “It is a profound act of faith and discipleship to speak and act on the powerful truth of the gospel growing inside you, midst the hierarchy and culture of a powerful military system,” said Peachey. Francisco, pastor of Calvary Community Church, where Guyton initially joined the Mennonite church in 1993, led the installation charge: “I believe that Glen was fashioned for such a time as this. . . . We called him to seek the heart of God. We called him to bring us back to a place of revival.” “I don’t see it as my job to save MC U.S.A. I say that’s God’s job,” Guyton said in his closing reflections. “If we live into our call as a church, as people of peace, God will provide us the tools we need for the church continue to grow and to thrive,” he continued. —Mennonite Church USA 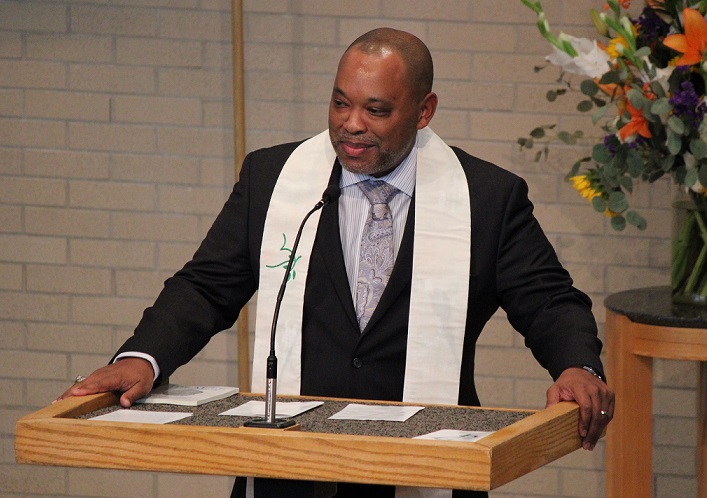