ABBOTSFORD, BRITISH COLUMBIA—Margaret Ediger, 87, died Dec. 18, 2020, at Abbotsford Regional Hospital. She was born Oct 29, 1933, in Rosetown, Sask., Canada, to Marie (Unger) and William Voght. Margaret graduated from Kelowna High School in 1951. She then attended Bethel Bible Institute in Abbotsford, Canadian Mennonite Bible College in Winnipeg, and Victoria College in Victoria, B.C. She taught in northern B.C. for three years. In 1962, she then went to seminary in Elkhart, Ind., where she met her future husband. She and George Ediger (Inman, Kan.) were married in 1962. They were married for 58 years. She and George spent one year as missionaries in Arizona; 12 years in Colombia, South America; and Dallas, Texas, for 11 years. She and George lived in Inman for a few years in between. They then moved back to Kelowna, B.C., and then Abbotsford. She is survived by husband George; son David Ediger of Langley, B.C.; and daughter Judy Grosbach Ediger of Los Angeles, Calif. She was preceded in death by her parents. Cremation has taken place. Time and date of service have yet to be established. In lieu of flowers, please make donations to any of the following: Mennonite Central Committee, Christian Peacemaker Teams or your local Mennonite church. 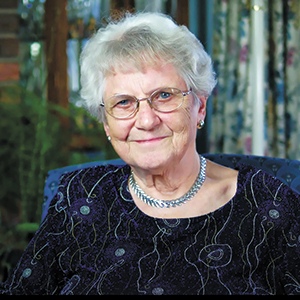