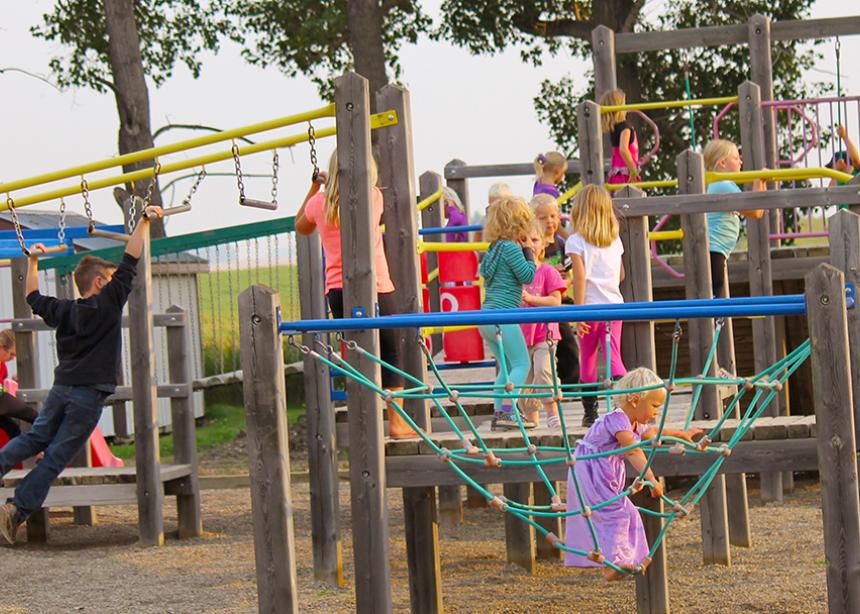 Why would a church of predominantly greying members build a playground for children?

Betty Brown was thinking about children as she drove past the abandoned playground at Midway School in the summer of 2014, so she stopped in to ask a few questions. A year later, at a dedication celebration on Aug. 28, 2015, 46 children under the age of 12 were at Bergthal Mennonite Church in Didsbury, Alta., to enthusiastically cut the ribbons tied all over the equipment that had been relocated to the church grounds.

Built in 1953, Midway School served the farming community as an education and gathering place for 60 years, until dwindling student numbers and repair needs made it unfeasible to continue operations.

In 2014, oil pipeline welders Darcy MacKinnon, Steve Nowosad and Jeff McNall purchased the building to convert it into a manufacturing shop. Brown said that MacKinnon “wanted the community to have access to this [because] it had been part of the community. And we have a lot of young kids in our church.”

“It was in good shape, and came out of the ground quite easily, Dave Loewen said.

Denise Derksen said the playground is a “beginning of a way to reach more people. [We were] shocked to find out how many families [in the community] have young children that we didn’t even know about.”

The vision to serve the surrounding community is a key motivator behind the playground construction. Said Brown, “We wanted the community to know this is for everyone. We went around to every family [in the area] with kids and gave them an invitation.”

Loewen’s grandchildren are the fifth generation of his family to attend Bergthal Mennonite. “The church has been around a hundred and some years, and I’d like it to be there another hundred,” he said. “We need growth in the church and I think you have to start with young people.”

Tracy Brown Ewert, who attended Midway School as a child, led a song called “For This Special Playground We Give Thanks,” and Bergthal’s new pastor, Anna Lisa Salo, led out in prayer as community and church members held hands around the playground. A hotdog roast rounded out the evening. 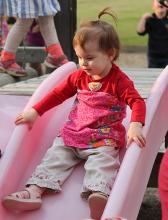 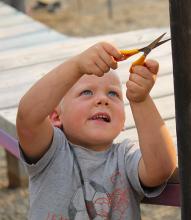