The land of my belonging 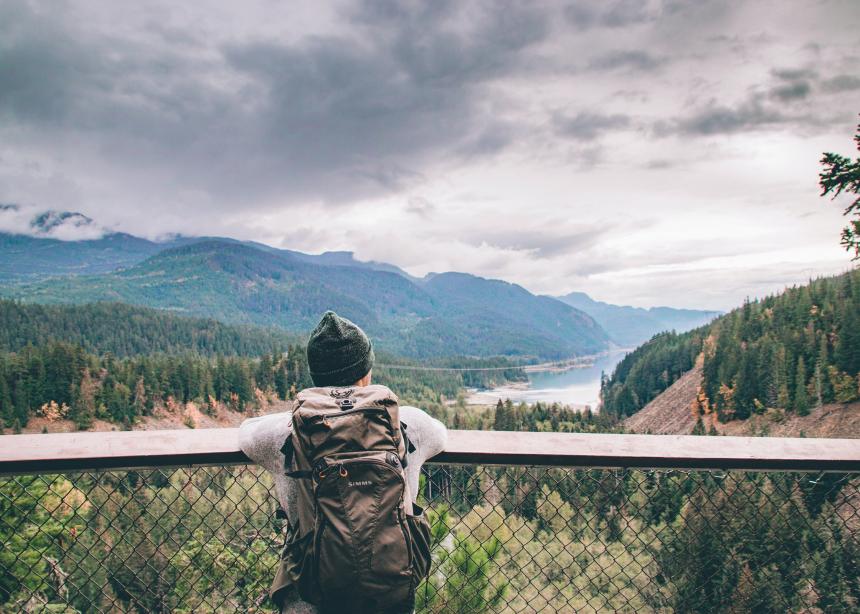 'What is the landscape that feels like home? The mountains with their forests, snow and freshwater streams.' (Photo by Viviana Rishe/Unsplash)

I sit in my backyard watching my dog as he rolls in the grass, pressing his back as deeply into the ground as he can. He moves freely, alternating his rolling with digging into patches of the earth that intrigue him.

I was honoured recently to sit in an Indigenous sharing circle where participants identified themselves by sharing their name and where they were from. By identifying the place of their origin, they shared something significant about where they belong and to whom. One member identified herself as a survivor of the 60s Scoop, communicating that she was ripped not only from her family but also her place of origin and belonging.

I wondered what I might say when they got to me. Our family moved around a fair amount and so it’s not a question I can answer easily. In one-on-one settings, I’ll say that home is where my pillow is. But that doesn’t answer the deeper question that asks where I belong, who my people are and where my place of origin is.

I know who my people are, but my brand of Mennonites—of European/Caucasian origin—don’t have a rootedness to one place. I might say we are intergenerationally nomadic. Two of my grandparents came to Canada to escape the Russian Revolution and subsequent civil war. The families of my other grandparents came earlier, having been invited by the government to farm what was considered to be the empty prairies, land that had been depopulated of the original inhabitants. They were promised that they could maintain their culture, language and religion, and that they could isolate themselves from others on the land.

A couple of centuries before that, Mennonites had been invited to farm what was considered to be the empty steppes of Russia, land that had also been depopulated of the original inhabitants. They were promised that they could keep their culture, language and religion, and that they could isolate themselves from others on the land.

Before Russia, there was Prussia, the Netherlands and, I’ve recently learned, Belgium. While we would settle down and often create prosperous communities, we have not been the original peoples and have lived separate from those indigenous to the land.

That intergenerational pattern of moving around is echoed on a micro-level in my personal life. I grew up in the mountains of northern British Columbia, in the temperate climates of rural Jamaica, and in a prairie city. While most of my adulthood has been in Winnipeg, I spent a couple of years in Cincinnati, Ohio, a city where I saw no evidence of original peoples, but rather the legacy of being a first stop for escaping slaves from the South seeking freedom.

With so much transition in my life, it is difficult for me to say where I’m from, to what land I belong.

My dog rolls dangerously close to a vulnerable new bush, interrupting my thoughts. Looking out over my backyard, I ask myself the question in a different way: What is the landscape that feels like home?

My answer is immediate: the mountains with their forests, snow and freshwater streams. In Kitimat, B.C., I grew up surrounded by mountains, able to see the majesty of their rugged, snow-covered strength no matter where I looked. In Kitimat, the gullies, filled with old forest firs, streams, and rotting logs, were our playground. The lakes were so clear that they appeared to be bottomless. It is also beneath those mountains that my mother’s remains rest.

Whenever I see mountains, I breathe deeply. A smile takes over my face. I feel surrounded by majesty, beauty and strength. I feel at home. My spirit feels that it is where it belongs.

As my dog continues exploring my backyard, I realize that this small plot of unruly greenery has also become a landscape of my heart. I come out here to read, write and meditate, surrounded by the lilac bush, apple tree and miniature berry bushes that I’ve planted. When I’m here, I feel hidden from obligations and expectations, free to listen to my heart as I feel the gentle breeze.

For this, I am grateful.

Heather Block is a member of Aberdeen Evangelical Mennonite Church in Winnipeg.

'What is the landscape that feels like home? The mountains with their forests, snow and freshwater streams.' (Photo by Viviana Rishe/Unsplash)

My grandparents and their children came to Waterloo in the fall of 1924 and they immediately "saw that it was good". They were generously hosted by an English farmer near New Dundee, who allowed them to gather food from the bounty of the land: an endless supply of apples, for instance, that could be dried for the winter.
Grandfather Peter badly wanted his own farm. He had been fleeced out of a land deal in Crimea, and in moving back to his roots in the Molotschna Colony, could only afford to live in a small village home that gave him the rights to a few acres in the outskirts. He had lost the mother of his four little ones, and remarried. On hearing that Canada was open to immigrants, they auctioned off their possessions to other villagers who felt that Russia would yet become a democracy, and booked the passage. A modern Duetz stationary engine he owned, didn't sell. Having always been shared with the neighbours, during the lawless revolutionary months and the ensuing starvation era it had lain hidden under Opa's strawpile.
Soon a small farm on the edge of Waterloo came to Peter's attention. It resembled the Crimean landscape -- somewhat hilly, with a meadow bordering Laurel Creek. The soil was rich, and next to the house there was even an old orchard. Peter was an experienced tree nurseryman, having operated this kind of business in his earlier years.
And then a miracle -- the news came, at the end of their first winter in Canada, that the engine had sold and now a down payment could now be made on that property!
The ramshackle house and barn were spacious by Old World standards, and Opa was finally in paradise. What a gift it was, this opportunity to get established once again! And with many of their friends in the Waterloo church having taken urban jobs, this little piece of Waterloo County became the destination for countless Sunday walks of perhaps two miles or more. Yes, the church members walked; cars were rare luxuries for them in 1925. They came to see apple blossoms, to pick strawberries, and to cavort with the Holstein calves. Almost like Ukraine again!
The farthest portion of the meadow could be reached by means of a path through our 15 acres of woods; here it was doubly sacred ground. Annual church picnics took place there, and perhaps our folks didn't even know this, but the Evangelical Brethren Church had been founded at that very site as well, when revival meetings and baptisms were conducted there in the late 1800's.
My dad took over the farm when his sisters moved away and improved things considerably. Our second-generation family spent close to two halcyon decades at that location. In the 1960's the city recognized the uniqueness of that property, and close to half of it is preserved today as parkland with walking trails and sports fields. A significant natural landscape, now enjoyed by many!

(I could furnish a 1930's B&W photo, or a very early Woldemar Neufeld oil painting of the original barn)