For one family, a Manitoba Hydro dam project has caused ‘a lot of grief, sadness and anger’ 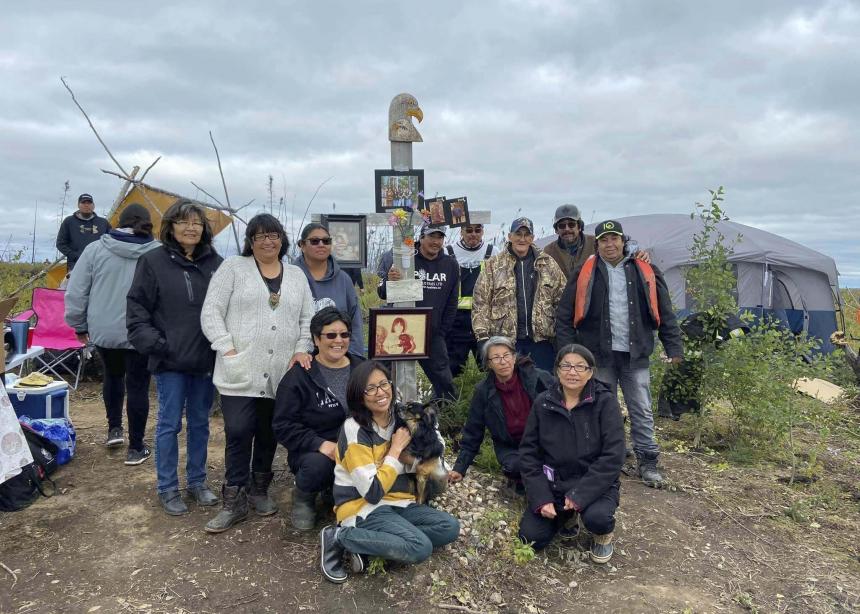 Members of the Kitchekeesik family gather for a final visit to Leon’s Island in late August. (Photo by Sadie-Phoenix Lavoie)

After 20 years of negotiations, planning and construction, the water has gone up behind Manitoba Hydro’s $8.7-billion Keeyask dam about 725 km. north of Winnipeg. The troubled project on the province's largest river now floods 45 square kilometres.

Manitoba Hydro says that is a small area for a 695-megawatt dam, but there is nothing small about it when that is where you grew up and where your family and culture are rooted.

That is why a family gathered on an island within sight of the Keeyask dam on the last weekend of August, just days before the flooding.

The immediate family of the late Allison and Rachel Kitchekeesik of Tataskweyak Cree Nation, along with supportive community members, were there to honour their family’s past. To say goodbye to a place that embodied home. To add their humble footnote to the tangled annals of progress.

A weathered white cross, reclaimed from Hydro that week, stood at the centre of their island encampment.

I first visited the island in 2016 when I worked for the Interchurch Council on Hydropower, of which Mennonite Central Committee (MCC) was, and is, a key part. I travelled with Brad Leitch, an accomplished filmmaker and graduate of Canadian Mennonite University. We made the hour-long boat trip from Split Lake, the main Tataskweyak community, down the Nelson River with three family members. The result was a short documentary called For Love of a River.

But last August I was there simply to mark the occasion with the seven Kitchekeesik sisters — Mary, Janet, Joan, Ila, Joyce, Marilyn, Gloria — and two brothers — Jonathon and George. Due to health issues, George could not come, other than a brief fly-by in a chopper. The siblings range in age from early 40s to mid-60s. Two died previously.

I travelled downriver to the island with Jonathon Kitchekeesik, for whom each bend in the river seemed to call to mind a lively story, usually about moose hunting. He spoke as someone in the place he belongs, truly at home.

Most of the siblings and their families have visited the area several times a year. Two have cabins there. Family photos show cousins on beaches, extended families around campfires, kids playing with baby owls.

Passing through the area on the way to the island with Jonathon that day were three university researchers with ties to the community, a First Nation employee tasked with documenting the impoundment and my 13-year-old son, who I thought should experience what most Manitobans, including Hydro and government officials, never do.

The history of ecumenical involvement on these issues goes back to the early 1970s when white northern clergy passed on the concerns of their Indigenous parishioners to southern church officials. In 1975, the churches—with Menno Wiebe of MCC in the thick of things—convened a public inquiry presided over by a retired chief justice of Manitoba. The legacy of church concern for fair treatment of people at the northern end of the transmission lines continues to this day.

I first heard the story of the island during my initial visit to Split Lake in 2012. Over supper at a community event, Marilyn Mazurat (formerly Kitchekeesik) took me back to April 27, 1980.

She was nine, her brother Leon, seven. Their family was camped on the island, which was small enough to walk around in 45 minutes. Their granny’s camp was a short distance away along the shore. As Mazurat and Leon left to play in the snow with their cousins near their granny’s camp, their mom charged Mazurat with care of her brother. “Look after your baby brother,” she said in Cree.

Due to a problem with the physiology of his mouth, Leon could not speak. But he could smile. “He was always smiling,” Mazurat says when talking about him. “He was special,” she adds, brimming with emotion.

Special or not, Mazurat eventually got tired of babysitting her brother that day and sent him home. “Go straight home,” she said. Later, when their dad showed up he asked about Leon. He was not back at the camp. They called. They scoured the island.

Eventually they found small footsteps leading to a hole in the ice.

The youngest Kitchekeesik, Gloria stood gazing up. When asked what she was looking at, the three-year-old pointed to the sky and said, “Leon.”

Jonathon and an uncle went back to the community to get help. Divers came the next day. They found nothing.

For the rest of his life, their dad scanned the shorelines in the area for remains.

A weathered cross erected on the island was the family’s monument to their special little brother. Though no map will show it, the island is Leon’s Island.

Not far away is, or rather, was Lillian’s Island — known for its beaches — where the late Kitchekeesik sister and her family would camp.

Also nearby is the site of their dad’s former cabin. We visited the spot in 2016, shortly after Hydro crews had started clearing trees from areas to be flooded. As our boat pulled up, I saw a Hydro hard hat nailed to a prominent tree, as if a modern mini-Columbus had announced a conquest.

Ironically, Tataskweyak Cree Nation is a partner in the Keeyask project. At least on paper. In 2009, less than 40 per cent of eligible Tataskweyak members showed up to vote on a partnership deal; 61 per cent of them voted in favour.

Hydro had given the First Nation $60 million for studies and consultation. Some community members say money was distributed in ways that made people more likely to vote “yes.”

The centrepiece of the partnership was an option for Tataskweyak and three smaller First Nations — York Factory, Fox Lake Cree and War Lake — to jointly purchase a share of up to 25 per cent in the project, supposedly putting them in line for a quarter of the revenues of a lucrative multibillion-dollar megaproject.

But the financial foundation of the dam crumbled even as the literal foundation was being poured. Since Tataskweyak locked into the partnership in 2009, the cost of the dam has gone from $5 billion to $8.7 billion. Projections for energy demand in Manitoba have dimmed and the Energy East pipeline, which would have included pumping stations that Hydro predicted would use roughly a quarter of Keeyask’s output, was cancelled.

In addition, exports to the U.S. were to be a financial cornerstone of the project, but as the prices of wind and solar power and natural gas have dropped well below the cost of producing power at Keeyask, Hydro is left on the wrong side of a seismic shift in the American energy market.

The partners will buy a far smaller stake in the dam — likely in the range of two per cent — acquiring shares of a sort that guarantee a minimum return even if the dam loses money.

Doreen Spence, who was elected Tataskweyak chief in 2016, says the partnership has been badly lopsided. “Hydro is a corporation that looks after their own needs rather than ours,” she says. “They call the shots.”

The Kitchekeesiks know that well. After bitter talks, the family reluctantly signed a compensation agreement with Hydro in 2015. The terms are confidential.

In August, with the stress of imminent impoundment building, the family again faced the blunt force of partnership.

Hydro announced that the water would go up starting at midnight on Aug. 26. Aware of that eventuality, the family had placed a stone memorial for Leon at a higher point upriver, but they wanted to gather to remove the cross from Leon’s Island and hold a ceremony. They had tried to do so on the weekend prior to impoundment, but the funeral of a respected elder on Saturday and bad weather on Sunday prevented it. They asked Hydro to delay the flooding for a few days.

A Hydro spokesman defended the company, telling CBC the family had known for years that the cross would need to be moved.

Evidently, Hydro would extend no grace, despite the circumstances.

Then, on Aug. 24, two days before the impoundment, Mazurat phoned to tell me Hydro had removed the cross and put it in storage.

For the family, this brazen and easily preventable move was callous and disrespectful. A desecration.

On Tuesday evening, after a wrenching call with Hydro, Ila Disbrowe (formerly Kitchekeesik) and her husband got in their boat. They arrived at Leon’s Island after dark, a few hours before the start of impoundment. They set up camp several feet above the water line. Ila livestreamed her stand.

The water started rising, about an inch per hour. The next day Hydro relented, delaying further impoundment until the family could gather on the island, which they did the following weekend.

Reflecting on leaving the island after one last weekend there, Disbrowe said: “I felt I totally failed my parents and our brother for not fighting hard enough.”

Mazurat added: "I have a hard time accepting the fact that the next time I go down it won’t be there. All that I’ve known and loved will all be under water.”

There is no happy ending. No solution. Money cannot replace what is lost.

“The flooding has caused a lot of grief, sadness and anger,” says Chief Spence.

In my mind, I keep hearing a question Disbrowe asked during our 2016 visit to the area: “I just don’t understand why there’s so many sacrifices we have to make?”

A version of this article first appeared in the Winnipeg Free Press. 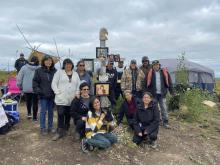 Members of the Kitchekeesik family gather for a final visit to Leon’s Island in late August. (Photo by Sadie-Phoenix Lavoie)