It takes a church to stage a Broadway musical 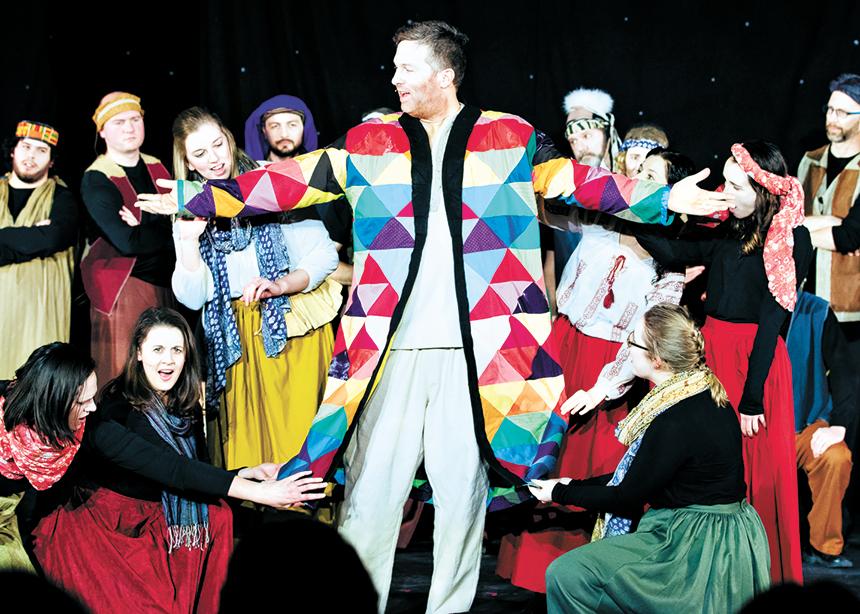 Driving to the cottage while listening to a recording of Joseph and the Amazing Technicolor Dreamcoat, Justin Martin had an idea. Could Breslau Mennonite Church stage it? More than a year-and-a-half later, that dream came true.

Enthusiastic visioning from a group in their 30s and 40s was matched by wholehearted support from others in the congregation, who simply asked, “How can I help?” What started from a small seed turned into five soldout performances.

From Jan. 31 to Feb. 3, 2019, an intergenerational cast from ages 4 to 64 put on the popular musical by Andrew Lloyd Webber and Tim Rice. Supported by a live band of six musicians and a crew of dozens more, the performances were truly a church-wide effort.

Most notable, everyone involved was connected to the church, where the pool of musical and artistic talent runs deep. Many people who were involved had previous experience, both on- and off-stage in musical theatre and drama productions, singing in a choir or playing in an ensemble. Whole families joined the project, in some cases including several generations. Many more helped out in whatever way they could, from sewing costumes to serving snacks.

As Karen Good, house manager for the production, said, “It takes a church.”

Director Julia Gingrich marvelled at the “community-building” benefits of the “collective effort.”

Breslau Mennonite’s musical version featured a chorus of 14 children who helped to tell the biblical story of Joseph, the dreamer, favoured with a special coat of many colours by his father Jacob. Sold into slavery by his jealous brothers, Joseph faces both his darkest hour and his eventual rise to great power in Egypt. This sets up an awkward family reunion, when the brothers, facing famine at home in Canaan, come to Egypt to buy grain. Fighting against his impulse to punish them, Joseph chooses instead to forgive, and is reunited with his family.

In the scene where Joseph is in prison in Egypt, the children appear carrying lights to offer him hope, foreshadowing that his life will take a turn for the better. Having the children so involved also helped to foster intergenerational relationships among the participants.

After rehearsals took place for months in the church gym, the sanctuary was transformed into a theatre, complete with stage lighting, a set that included blocks in the shape of pyramids, and dramatic, colourful costumes suited to each genre of music. It was a different way of engaging with a Bible story and a different way to do church.

How many pastors can say they danced and sang calypso, jazz and disco in costume, in their church sanctuary, while telling a Bible story? For Pastor Eleanor Epp-Stobbe, it just seemed natural to join in when the call went out last spring for participants, so she joined the choir. She commented on how the themes of brokenness, redemption and forgiveness found in the Joseph story are part of everyone’s life. “This could be us,” she said.

As enjoyable and exciting as it was to perform the shows, Chris Steingart, who played Joseph and served as artistic director, noted that “the journey to get there has been just as rewarding.”

Like Joseph, who sings that “any dream will do,” Breslau Mennonite knows the power of a dream when a whole church gets behind it. And the children in this production are already dreaming about the next one.

Besides drawing the church together, the production will also benefit the wider Breslau community. All the proceeds from the concession sales will support the church’s summer camp, a free, week-long program for community children entering Senior Kindergarten to Grade 6. 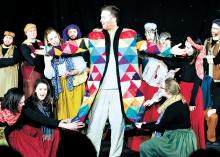 Narrator and musical director Stacey VanderMeer, far right, takes a selfie with the whole family of Jacob in Breslau Mennonite Church’s production of Joseph and the Amazing Technicolor Dreamcoat. (Photo by Christine Saunders) 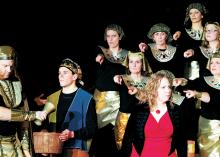 Joseph, played by Chris Steingart, accuses Benjamin, played by Jonathan Klassen, of stealing his cup. Narrator Stacey VanderMeer, in red, registers shock while the chorus joins in the blame. (Photo by Christine Saunders) 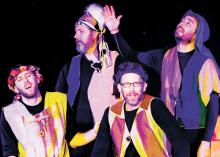 Matthew Rappolt, left, Karl Braun, Brent Schmidt and Nick Martin, as some of Joseph’s brothers facing famine, long for ‘Those Canaan Days’ when they had plenty to eat. (Photo by Christine Saunders) 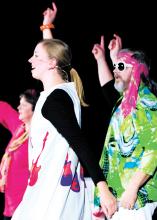 Janice Klassen, left, Amanda Snyder and Karl Braun dance and sing, ‘Go, Go, Go Joseph,’ to assure him that he’s not beaten yet, and his fortunes will change. (Photo by Christine Saunders) 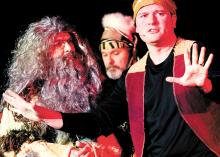 Justin Martin, right, who played Issachar and served as production manager, explains to his father Jacob, played by Phil Martin, left, what happened to Joseph, and why there will be ‘one less place at the table, while one of the brothers look on. (Photo by Christine Saunders) 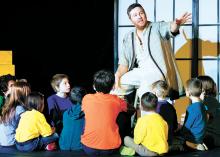 Chris Steingart, Joseph and artistic director, and Stacey VanderMeer, narrator and musical director, begin to tell the children the story of Joseph and his dreams. (Photo by Christine Saunders)