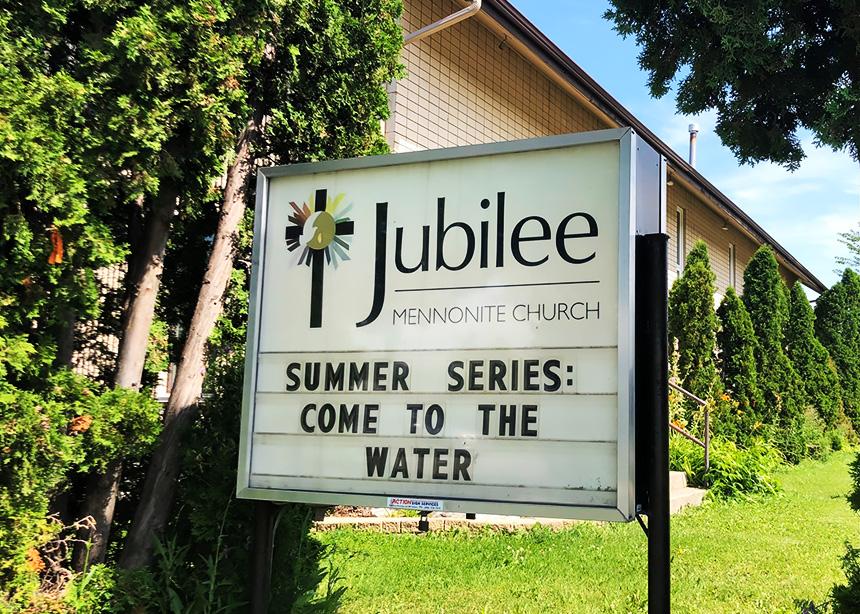 Jubilee Mennonite, which is located in northeast Winnipeg, was founded in 1995 as a dual-conference congregation through the merger of MC Manitoba’s Northgate Mennonite Fellowship and the MB Churches of Manitoba’s Valley Gardens Community Church. (Photo by John Longhurst)

The decision, which was made in June, affirms that “all people are made in the image of God and are equally loved by God,” and that everyone is welcome to join “regardless of gender identity, sexual orientation, race, ethnicity, social or economic status, or ability.”

Through membership, everyone is welcome to participate in the full life of the church, including communion, baptism and marriage, the statement goes on to say.

The discussion about welcoming members of the LGBTQ+ community was led by interim minister Ken Warkentin, who conducted interviews on the subject with everyone in the 50-person congregation.

As a result of those meetings, and through other congregational conversations, “it was clear the church wanted to make a statement,” he said.

Jubilee's church council came up with a statement, which was agreed to by the congregation on June 12.

“There wasn’t a single voice against it,” Warkentin said.

After making the decision, the church informed leadership of both conferences.

Michael Pahl, executive minister of MC Manitoba, welcomed the news, noting the regional church is “committed to creating space for congregations to discern how the Spirit is leading them with regard to LGBTQ+ inclusion.”

With Jubilee Mennonite Church's announcement, 10 of 37 congregations in the conference are now “fully affirming,” he said.

“I am grateful whenever any of our congregations diligently works through the challenging process of discernment around LGBTQ+ inclusion, reading the Scriptures, looking to Jesus, and sensing the Spirit's leading,” Pahl added. “Even when congregations come to different conclusions, this process leads to greater awareness of the challenges faced by our LGBTQ+ siblings and neighbours, and a greater compassion for these beloved children of God.”

In response to a request for comment from the Mennonite Brethren Church of Manitoba, that denomination sent a statement from its leadership board, saying it was developing a response to Jubilee’s decision. The response is expected by September.

In the statement, the MB board applauded Jubilee for the way it has intentionally worked to include LGBTQ+ people, and said it could “affirm much of what is contained in the statement.”

However, it noted, “There are elements in sharp disagreement with our shared confession of faith.”

This would include belief about marriage, which the MB Confession of Faith affirms as being between a man and a woman.

If the disagreement results in Jubilee being required to leave the MB conference, that would “make me sad,” Warkentin said, noting that Jubilee has benefited over the years from support from that group.

As for the church’s response to the decision to welcome and include LGBTQ+ people, members feel “satisfied with the process,” Warkentin said, adding that the statement is consistent with who the congregation is and wants to be.

Jubilee Mennonite, which is located in northeast Winnipeg, was founded in 1995 as a dual-conference congregation through the merger of MC Manitoba’s Northgate Mennonite Fellowship and the MB Churches of Manitoba’s Valley Gardens Community Church. 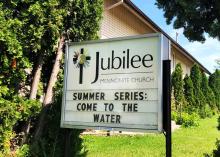 Jubilee Mennonite, which is located in northeast Winnipeg, was founded in 1995 as a dual-conference congregation through the merger of MC Manitoba’s Northgate Mennonite Fellowship and the MB Churches of Manitoba’s Valley Gardens Community Church. (Photo by John Longhurst)

So wonderful to have an affirming congregation in northeast Winnipeg. Thank you Jubilee Mennonite Church for leading the way to welcoming all of God’s children into your community.