Churches ‘on the healing side’ 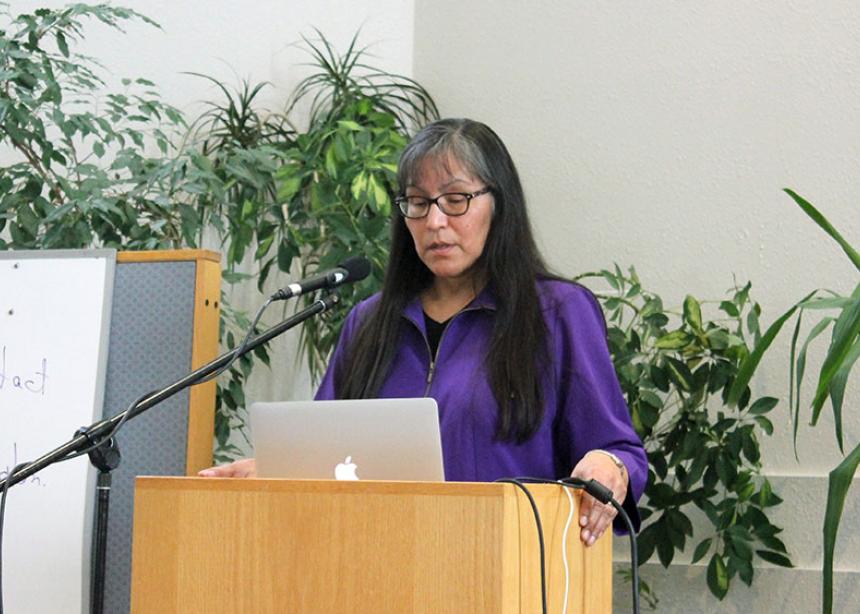 <p>At a recent Saskatoon ecumenical event in response to missing and murdered indigenous women, Pauline Muskego of Onion Lake Cree Nation shared the heart-breaking story of her daughter&rsquo;s disappearance and the discovery, four years later, of her remains. (Photo by Donna Schulz)</p>

“We are all equal. Not one person is above others.” Elder Marie Linklater’s words set the tone for a day of learning and discerning on April 18, when about 200 women and men from Saskatoon and area gathered at Mayfair United Church for an ecumenical response to murdered and missing indigenous women and girls. Representatives from eight denominations or groups, including Mennonite Church Saskatchewan, organized the event called Voices of our Sisters.

Winona Wheeler, associate professor of indigenous studies at the University of Saskatchewan, and Glenda Abbot, visitor services manager at Wanuskewin Heritage Park near Saskatoon, shared the history of indigenous women. In pre-colonial times, grandparents cared for the community’s children while their mothers provided food and clothing and tended the fires. Men were the hunters and protectors of the community. “Man and woman were equally needed, but each had his or her own role,” said Abbot.

With colonialism came three new values—individualism, materialism and patriarchy—that were diametrically opposed to the indigenous way of life. Treaties relegated first nation communities to reserves, paving the way for European settlement. The Indian Act furthered the government’s plan to assimilate indigenous people into white culture through inter-marriage and education.

Initially, the plan wasn’t successful because of the dominant role elders played in children’s lives. The government eventually realized that to assimilate the children they would have to remove them from their communities. In residential schools, children were forbidden to speak their language or practise their culture. Education “consisted of convincing people that their way of life was bad,” said Wheeler. “When you are told that you are no good for several generations, you start to internalize that message.”

Keynote speaker Pauline Muskego of Onion Lake Cree Nation told how her daughter Daleen Bosse disappeared in May 2004 while studying at the University of Saskatchewan. Muskego felt frustrated by how police handled her daughter’s case.

“To the police, she was just a file number,” said Muskego, “but she was our daughter.” Four years after her disappearance, police found Bosse’s remains. Each summer since then, Muskego walks the 325 kilometres from her home in Onion Lake to Saskatoon, commemorating her daughter’s death and raising awareness of the issue of missing and murdered indigenous women.

A panel of presenters from various perspectives told their stories and offered ideas for what could be done to address the issue. Several panel members spoke of the work of Iskwewuk E-wichiwitochik—Women Walking Together—an advocacy and support network for families of missing and murdered indigenous women. Helen Smith-McIntyre, a member of Amnesty International and one of the founders of Iskwewuk, was the only non-indigenous panel member. She urged participants to “speak out in favour of a national inquiry so that all stories are told and so that we white folks aren’t telling them what to do.”

Participants broke into smaller groups to brainstorm possible responses to what they had learned. Suggestions included:

Phyllis Goertz of Wildwood Mennonite Church, Saskatoon, represented MC Saskatchewan on the planning committee. “I attended a workshop in Regina on the issue and it really touched my heart,” she said. “I committed to pray daily about this. So maybe I ended up being involved as an answer to prayer.” Goertz expressed disappointment that only a handful of Mennonites attended Voices of our Sisters. She feels it is important for different denominations to collaborate on this issue. Christians working together can be “a very powerful voice for change,” she said.

“The church, through its participation in residential schools, has contributed significantly to the creation of this issue,” said Goertz. “We need to be on the healing side now.”

About the video:  Mark Kleiner, a Lutheran pastor from Biggar, Sask., performed a song he had written called 'Indian Time.' The song featured a Cree prayer voiced by Dolores Sand.

Ally or accomplice: What does the Lord require of us?
Langley church adopts indigenous protocol
Students learn about indigenous land issues

At a recent Saskatoon ecumenical event in response to missing and murdered indigenous women, Pauline Muskego of Onion Lake Cree Nation shared the heart-breaking story of her daughter’s disappearance and the discovery, four years later, of her remains. (Photo by Donna Schulz)