How to join the MWC family 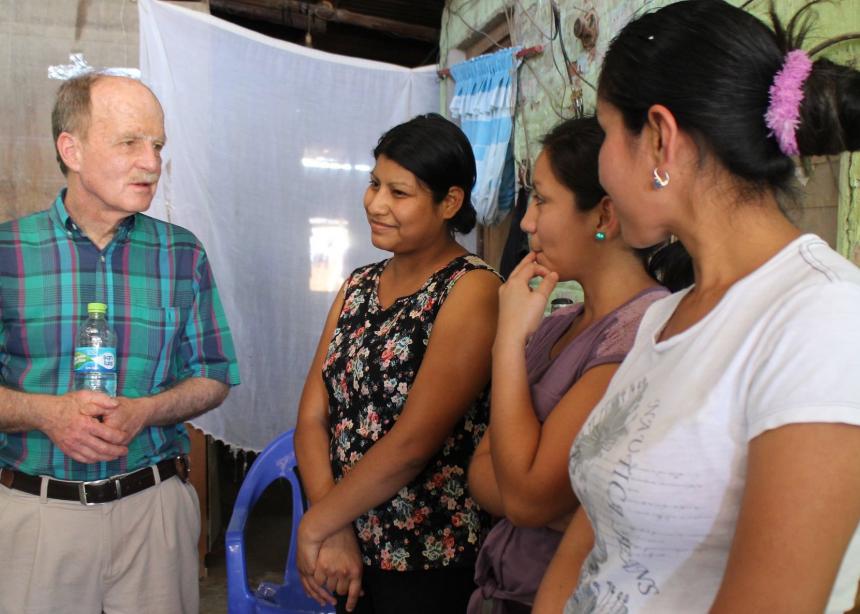 MWC stands in solidarity with its member churches in joy and struggle. Pablo Stucky, left, speaks with members of Iglesia Hermanos Menonitas Peruana on a Deacons delegation visit after a severe flooding event. (MWC photo by Henk Stenvers)

But what does it mean to be a member of MWC?

MWC exists to be a global community of faith in the Anabaptist tradition, to facilitate relationships between Anabaptist-related churches worldwide and to relate to other Christian world communions and organizations.

However, there is a formal process for becoming a member of this global communion.

The leadership of a national church body begins an application process. It culminates with approval from MWC’s General Council. Local congregations and their individual members become part of MWC through the membership of their national church.

“Being part of MWC means becoming part of a family,” says Arli Klassen, MWC’s regional representatives coordinator. “We pray for one another. We collaborate on worship resources so we can practise our sense of togetherness while we are physically apart. We care for one each other in suffering and in joy.”

Delegates appointed by MWC national member churches become the General Council members who learn and discern together at meetings every three years.

In order to become an MWC member church, the requesting body must have at least two local congregations with a total of at least 500 baptized members, and must have been operating with official status for at least five years. Smaller national churches may become associate member status.

“Membership in MWC means all member churches are publicly known to be part of the worldwide Anabaptist Mennonite communion,” says Klassen. “Being part of MWC involves both rights and responsibilities for each national member church.”

Becoming a member church of MWC is a three-stage process that takes several years:

The national church can be officially welcomed into MWC as a member after the Executive Committee has discerned to accept the request and the General Council has reached consensus on the request for membership.

What does it mean to be an Anabaptist-related church?

MWC does not follow a creed or require churches to adhere to certain theological positions. Instead, MWC has a statement of seven convictions shared by all MWC member churches.

“MWC’s Shared Convictions are the result of a process that looked for Anabaptist convictions arising ‘from below,’” says César García, MWC’s general secretary. “These convictions are offered both as a testimony of our faith walk as a global family and as a calling.”

A written document called “Mutual Expectations” forms a covenant between member churches and MWC. This is reviewed every three years on the schedule with General Council meetings. This is also used to document the annual “Fair Share”  membership contribution by national church members.

“For a national church to be member of MWC is a wonderful answer to Jesus’ prayer in John 17:20-23: ‘I ask not only on behalf of these, but also on behalf of those who will believe in me through their word, that they may all be one… so that the world may believe that you have sent me,’” says Pablo Stucky, MWC’s regional representative for the Andean region of Latin America.

MWC stands in solidarity with its member churches in joy and struggle. Pablo Stucky, left, speaks with members of Iglesia Hermanos Menonitas Peruana on a Deacons delegation visit after a severe flooding event. (MWC photo by Henk Stenvers)