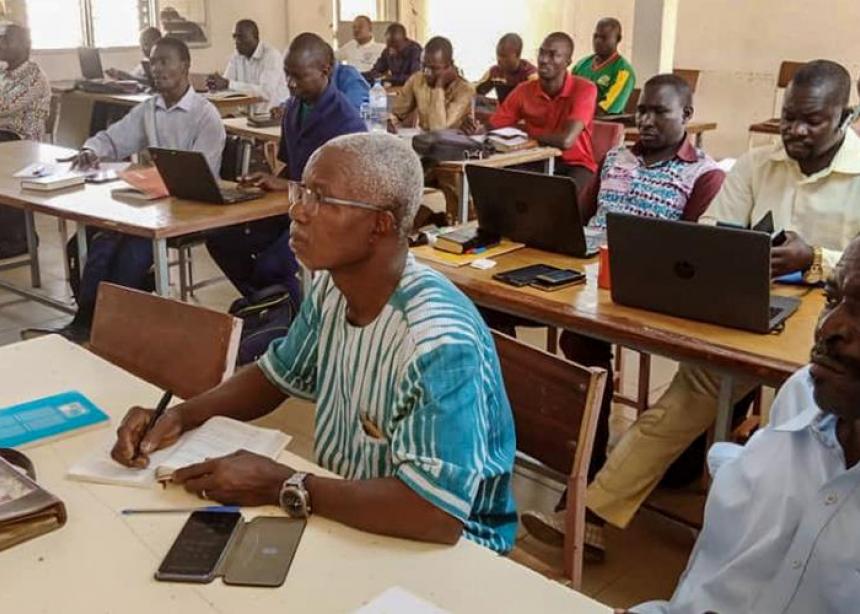 Sibiri Samuel Zongo, a student at LOGOS University in Burkina Faso, lamented that the church in Africa is “like a canoe that passes without leaving a trace.” Anicka Fast, serving with Mennonite Central Committee and Mennonite Mission Network, is committed to changing this reality, through teaching courses that hone skills in writing oral history.

A class of 34 students from 10 denominations was studying Christianity in West Africa at LOGOS University in Ouagadougou, the capital city of Burkina Faso. As the teacher, I wanted the students to recognize their own roles in preserving the history of African Christians. So, I organized the course around the biographies of African Christians. We explored key historical themes — colonialism, independent church movements, persecution and African missionary initiatives — through the lens of biographies. They included people like Perpetua, Marcellus, Kimpa Vita, William Wade Harris, Samuel Crowther, and Alfred Diban, the first Burkinabè Christian. In practical exercises, we focused on interview techniques, such as asking good questions, archiving and writing.

The students were fascinated by the lost kingdoms of Nubia and the shocking statistics of the slave trade. They grasped the significance of prophets like Kimpa Vita and William Wade Harris in rooting Christianity in African cultures and contexts. Their shoulders slumped in discouragement as they contemplated the betrayal of Bishop Crowther by his young, white colleagues.

“Can reparations be made for this?” one student poignantly asked.

During the week, the students identified a long list of post-independence themes that could be topics for future research by African scholars and began to plan their own biographies of African Christians. These will be added to the Dictionary of African Christian Biography, an electronic, open-access resource that uses biography to document the 2,000-year history of Christianity in Africa.

At the end of the course, I felt a deep sense of satisfaction. This was my first time teaching a course directly related to my doctoral studies, which I completed in 2020. I felt like I had arrived at a destination that I had been seeking for years. It was a vindication of years of biking through cold Boston traffic, countless moments of disorientation with, and temptation by, ivory tower elitism, and many weary Saturdays slogging through papers in which I wrote about — but could hardly imagine — the shimmering reality of friendships and conflicts within missionary encounters in Africa.

On the last day, I asked students what they would take away from this course. Their feedback was powerful and thought-provoking.

Sibiri Samuel Zongo, one of the oldest students and a member of the Assemblies of God, commented on how many important contributions to the church in Africa remain unknown and undocumented. He lamented that the church in Africa is “like a canoe that passes without leaving a trace.” At the same time, he and others in the class expressed appreciation for sharpening their research and writing skills. They spoke of the empowerment they felt in having clear steps to produce a biography.

Many students were amazed to learn that the church in Africa had been present prior to the arrival of colonial powers. They saw this as a game-changer. Yet they asked pointed questions about the ongoing inequities of access to sources and stories, inequities that continue to divide African Christians from many Western counterparts.

I have many ideas to improve the course. I need more input on pre-colonial kingdoms, more on Islam, and a more nuanced presentation of the Rwandan genocide and South Africa’s anti-apartheid movement. I need to better ensure that more women are selected as biography subjects.

I am excited about working alongside these African historians. But I am also sobered by the ongoing barriers that make some stories so much more influential than others. I am grateful for the opportunity to be in Africa. It allows me to participate in the diverse, faithful, Spirit-led missionary movement that has been flourishing on this continent since ancient times.

Anicka Fast and her husband, John Clarke, serve in Burkina Faso, through Mennonite Central Committee, with their daughters, Anne-Sophie and Maika. Fast is seconded to Mennonite Mission Network for part-time ministry as a specialist in church history and missiology for French-speaking Africa.