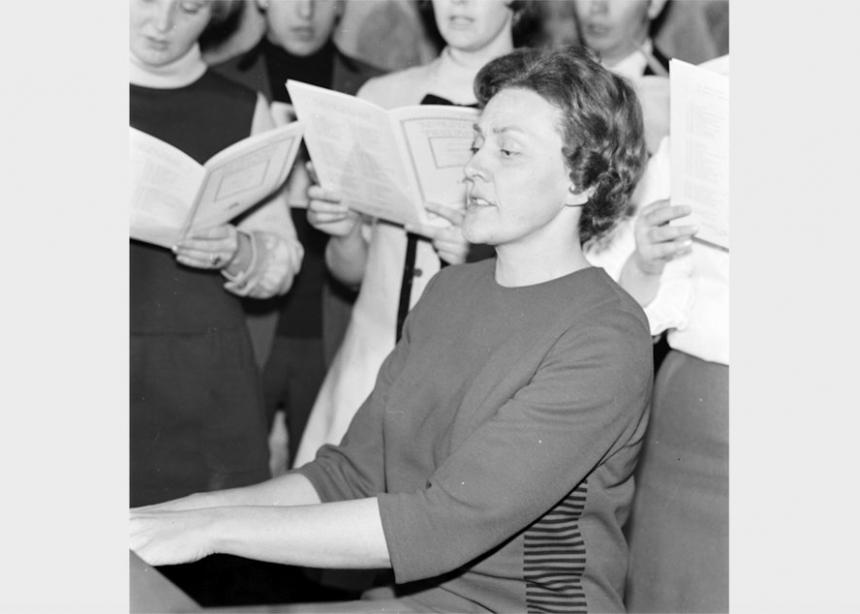 Helen Martens, Conrad Grebel University College’s first music faculty member, passed away on April 9 at the age of 92, surrounded by family in Winnipeg. She last visited Grebel in 2013 during the college’s 50th anniversary.

Grebel staff and faculty remember Helen Martens for her extensive contributions to the music department and the college community. She was a beloved professor at Grebel from 1965 to ’93, initially teaching courses in Music and the Fine Arts as well as Music and Literature. During her 28 years at Grebel, she became director of the college choir and began piano instruction, while also teaching music history and music appreciation.

“In her pioneering work as a musicologist, pianist, choral director and supportive mentor, Helen laid the foundation of Grebel’s distinctive music program,” says Laura Gray, Grebel’s music chair. “The mission she embodied—to equip students in academics, performance and ensemble work, and to engage them in searching for music’s meaning in its connections with other disciplines and society—continues to inform the direction of the music program today.”

Professor emeritus Leonard Enns remembers Martens as someone who held uncompromising standards. “She was the founding director of Inter-Mennonite Children’s Choir (IMCC) with which she established an impressive record of choral discipline and excellence, but I knew her mainly as an academic colleague whose ideals were uncompromising and strong,” he says. “Her early work blossomed into what is now a very fine liberal arts music program at Grebel. Her work lives on in the music department, in the IMCC, and in the blending of solid and balanced academic and performance standards that are the hallmark of the current program.”

Marten’s first book, Hutterite Songs, was based on her doctoral dissertation, and it established her as an authority on the music of the Amish, Hutterites and Mennonites. She published Felix Mendelssohn, Out of the Depths of His Heart in 2009 and Passion vs Duty: Felix Mendelssohn, Cecile, Jenny Lind and E.J. in 2012. These two books stem from research she began in the 1980s, translating hundreds of letters written in German gothic script.

Professor emerita Carol Ann Weaver also worked with Martens during her time at Grebel. “Nothing has ever matched Helen’s presence and impact at Grebel,” Weaver says, “from her vibrant soprano voice cutting through the sea of mostly male voices in college council; to her raucous and infectious laughter; to her warm-hearted encouragement to all of those who sought her counsel; to her generous guest appearances in my Women and Music classes, where she gave vivid, memorable stories about Fannie and Felix Mendelssohn as if they were her own cousins or older siblings.”

“Her tireless work and keen scholarship, resulting in various publications, is no better described than in the title of Helen’s most recent book, Passion vs Duty. The work about Felix Mendelssohn and Jenny Lind reveals how their passions shaped and determined their musical duties,” Weaver adds. “The title alone describes Helen's own life and work.”