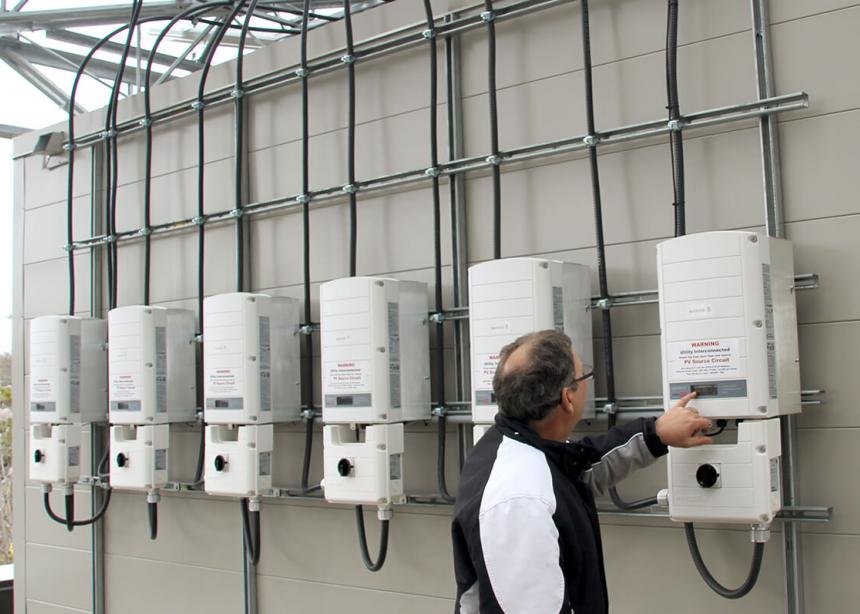 After nearly four years in its 50 Kent Avenue building, Mennonite Central Committee (MCC) Ontario is pleased with the choices it made and feels that its constituents can be satisfied that the extra expenses have paid creation-care dividends. Most initiatives have met or exceeded expectations, especially with the rising price of electricity in the Ontario market.

The 45,000-litre tank under the recycling, storage and locked bicycle storage shed behind the main building provides water for toilets and urinals, even in winter, from water collected on the 5,100-square-metre roof and porch roofs at the entrances. When everything is working properly, the building, which houses numerous offices as well as Thrift on Kent, only uses as much water per month as a family of four in a private home: 22 cubic metres.

Except for shipping and receiving, the building heats and cools using air-to-air heat pumps with no backup systems. If temperatures drop below -23 degrees Celsius, the system cannot keep up, but fortunately this happens seldom in southern Ontario and is short lived.

Parking-lot lighting has been LED from the opening in 2013. Now, Kitchener-Wilmot Hydro is providing a grant for the main floor of the building to be switched from fluorescent to LED, with a payback period of less than two years. Bob Lebold, the building’s physical services coordinator, says that the present bulbs and ballasts are wearing out faster than expected and so needed to be replaced anyway.

Lighting on much of the second floor, though, is aided by large windows to the outside and with large clerestorey windows bringing natural light down to workers. A smart system also moves warm or cool air around the building to areas that are either too cool or too warm, using less energy than cooling or heating the air.

But one of the biggest green aspects of the building is the 200-kilowatt solar electric installation on the roof. At a cost of between $100,000 and $200,000, the building was made ready for the panels and system when it was built, even though the system was only installed last year. Community Energy Development Co-operative, which owns and runs the installation, rents roof space. The system supplies as much electricity as the building uses on the hottest days in July. After 20 years, ownership will transfer to MCC Ontario. The panels also create measurable shade on the roof, further reducing cooling costs.

Bike riding is encouraged with the provision of a locked bike shed, which is already more than full, as well as connections to the Iron Horse Trail that passes nearby. Showers were installed in both the bathrooms on the second floor for riders. Light-rail transit will pass right in front of the building, with a stop a few hundred metres away, furthering smaller energy footprints.

It is difficult to measure the energy savings of such a building, compared to the former one on the same site. The current energy costs of $10,000 per year anecdotally are seen as very good. Rick Cober Bauman, executive director of MCC Ontario, believes that the building itself is a good witness to MCC’s goal of creation care. That the Community Energy Development Co-op is renting the building for its annual meeting this spring, to show off both the roof-top installation and the energy-efficient building, is a good news story in itself.

All of this work has not been lost on Sustainable Waterloo Region, which just honoured MCC Ontario with its 2016 Greatest Greenhouse Gas Reduction Award. 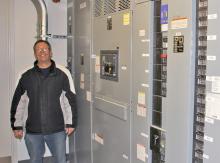 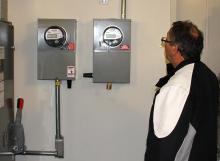