The gift of sewing

Helga Bergen says her abilities are ‘a gift from God’ 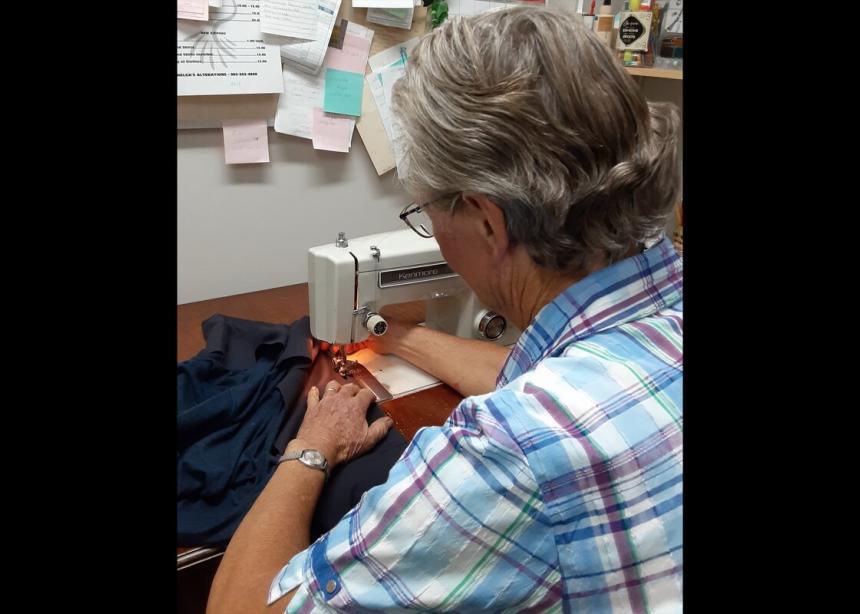 Helga Bergen sews in a panel on an article of clothing. (Photo by Maria H. Klassen)

Working in a long-term-care home in Vineland, Ont., Helga Bergen saw a need among the elderly residents. She came up with an idea to alter clothing for the bed-ridden residents, so they would be comfortable wearing their own clothes. She took an item of clothing, cut open the back, sewed a panel onto each side, finished off the seams, added fasteners, and it was ready to slip on. She didn't need a pattern, just an idea that developed into something bigger.

From a very young age, Bergen knew she wanted to sew. As a young child, she received a yellow floral skirt in a shoe-box package from Mennonite Central Committee (MCC), wrapped in a towel held together with safety pins. When the hem of this skirt accidentally ripped, she got out her mother's sewing supplies and fixed the hem.

Growing up in Paraguay, all girls took sewing classes, starting at the age of 18. Bergen was so eager to learn that she started at 16. All clothes were sewn at home, using a sewing machine, as clothes were not sold at the local store in the Paraguayan Mennonite villages. Bergen worked for the sewing instructor until she had paid for her sewing lessons. This gave her lots of experience sewing pants, shirts and dresses for the local clientele, and doing a wide variety of alterations.

Shortly after she married Jacob Bergen, they immigrated to the Niagara Region, where they became members of St. Catharines United Mennonite Church. While raising a young family, Bergen spent many hours working for local bridal stores, making dresses and doing alterations.

Both her father (in Paraguay) and her grandfather (in Siberia) worked as taxidermists, a skill they learned on their own. They felt they had a special gift from God of knowing what to do to make their work look real.

Bergen says, "I also feel my sewing ability is a gift from God."

From her father and grandfather she inherited the desire to do what she was gifted with, and watch it develop into something bigger, more than she could have imagined. Giving people pleasure to be able to wear their own clothes when they are bed-ridden is a way for her to serve God with her gift of sewing.

Helga Bergen sews in a panel on an article of clothing. (Photo by Maria H. Klassen)