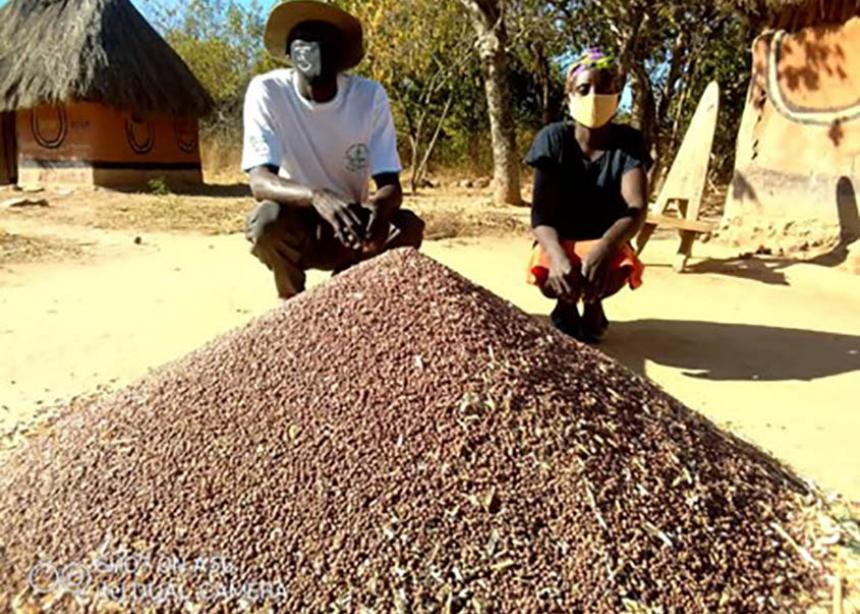 Farmers in Binga, Zimbabwe, show off a strong cowpea crop from this past harvest season. They will be able to include additional protein in their diets thanks to the cowpeas, or sell the crop for additional income. (Kulima Mbobumi Training Centre photo)

A combination of favourable weather conditions and good farming practices means many farmers have had a fantastic growing season at many of the Canadian Foodgrains Bank project sites in southern Africa.

“This was a bountiful season for me as compared to the 2019-20 agriculture season,” says Velina Siapani of Zingozo village, Zimbabwe, a lead farmer on a project of Mennonite Central Committee Canada (a Foodgrains Bank member) that was implemented locally by partner Kulima Mbobumi Training Centre. “I managed to get 47 buckets of millet from the two-kilogram pearl millet seeds which I received . . . . As if this were not enough, I also managed to produce three buckets of groundnuts and eight buckets of cowpeas.”

For Lilian Zheke, a Foodgrains Bank conservation agriculture technical advisor based in southern Africa, strong harvests are welcome and exciting news. “The outlook in terms of harvest is good for most project sites, and indications from partners are that most farmers will have much better yields than the last season,” she says.  “A significant number of project participants will have enough cereal to take them throughout the greater part of the year.”

Elizabeth Ngwenya is also taking part in the same project as Siapani, although in a different village. “Given the excessive rains during the 2020-19 season, we thought the harvests were going to be bad,” she says, noting her family’s relief at being able to produce a strong crop. “I will not sell my produce, especially the cowpeas, which I have set aside for consumption as a source of protein for my family.”

Zheke is careful to note that not all participants in the projects with which she works have had the same strong results. “We also have some isolated areas, like Balaka, Malawi, which experienced dry spells that affected maize production for about 60 percent of project participants,” she says. “But despite the dry spells, farmers practising conservation agriculture did better than farmers who did not practise it at all.

“In Zimbabwe, there were isolated areas where waterlogging and leaching could reduce potential harvests, especially since fertilizer and inputs were a major challenge for farmers coming out of last year’s dry spell and the economic fallout from the global pandemic,” she says.

Farmers in developing countries don’t have access to the same type of emergency supports that Canadians have. A poor harvest means more than less food on the dinner table; it also means children may not be able to attend school, families don’t have the energy or strength to work at off-farm employment, and emergency medical care might not be possible. Sometimes families might have to sell an animal, like a goat or cow, that’s been providing a small but steady income in order to get the cash needed to help them get by. It is good they have something in case of emergency, but it also means that, once the immediate crisis is over, they’re without their secondary source of income.

The good news of strong harvests, and even the news that conservation agriculture is helping to soften the blow of poor weather and other issues, is welcomed by these African farmers. 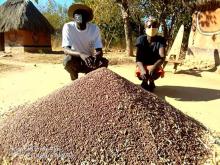 Farmers in Binga, Zimbabwe, show off a strong cowpea crop from this past harvest season. They will be able to include additional protein in their diets thanks to the cowpeas, or sell the crop for additional income. (Kulima Mbobumi Training Centre photo)