George Heidebrecht, a man with ‘the greatest laugh,’ recalls working at the southern Alberta camp more than 50 years ago 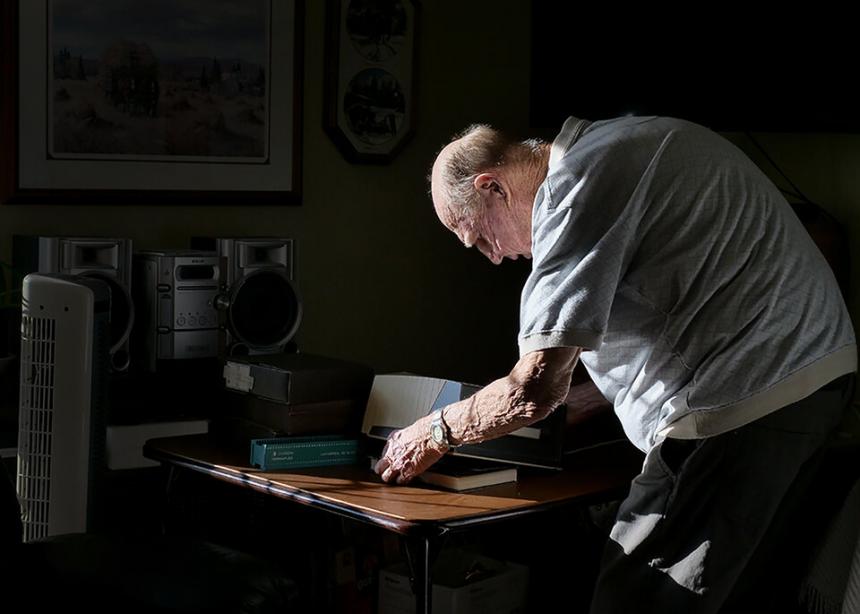 George Heidebrecht, who was instrumental in the early days of Camp Valaqua, fiddles with his slide projector. (Photo by Ruth Bergen Braun)

George Heidebrecht fiddled with the knobs of his slide projector in anticipation of a morning of storytelling.

Stories of experiencing God in different ways than in their lives in the city or on the farm.

A sacred space to many in Mennonite Church Alberta, Camp Valaqua gives birth to stories, stories which pass down through generations. American historian Studs Terkel once said, “People are hungry for stories. It’s part of our very being. Storytelling is a form of history, of immortality too. It goes from one generation to another.”

Having begun as a summer outing for kids on the grounds of Mennonite Bible Institute in Didsbury, Alta., Camp Valaqua was started in 1958. Heidebrecht, now approaching his 90th birthday, remembers the energy when families worked together to try to get a camp established. In the 1960s parents didn’t just bring their children to Camp Valaqua, leaving them there for a week, but they stayed and volunteered. He laments that now parents give money more easily than time. He summarizes this enthusiasm: “When you did things for your own kids, other people’s kids also benefited.”

Heidebrecht’s fondest memories are of the wilderness camps he organized in the early 1970s: one west of Longview, at Cataract Creek, and another near the Sheep River. Although not on-site, these "out-camps" were considered part of Camp Valaqua’s programming. Regulations were simple in the 1970s. All he needed was the provincial warden’s permission and they could camp and hike on government land. He noted that the world operated on trust then; he was just advised to bring a gun in case of bears.

As a Camp Valaqua out-camp, he and an assistant would take up to 18 teenage boys out for some “roughing it”-type camping. They’d sleep in lean-tos or under the stars, cut logs for fire and benches for their devotional circles. Heidebrecht laughed, recalling one fellow who didn’t realize that punching holes in his tarp could be an issue when it rained.

One year it rained constantly during the day but was clear at night. The solution? Swap activities: Play during the night and sleep while it was raining. This weather complication did, however, warrant a visit from the warden who offered to let them sleep in a shelter for a few nights to dry out. Seeing as the shelter had tables to write on, Heidebrecht asked each boy to write out what we’d now call a “camp evaluation.” He kept these notes and continues to treasure them today.

Bruce Dick, a wilderness camper originally from Rosemary, was pleased to share memories and send greetings back to Heidebrecht. As a young camper, he wrote, “I liked it real lots and also appreciated how we got real close to God. I feel it was a bit wet but we had fun… God blessed our experiences.”

As for remembering Heidebrecht, Dick chuckled, “I remember his laugh. He had the greatest laugh.”

There was no concern about keeping parents updated on what was happening. Parents didn’t seem to worry as some do now. They delivered their sons into Heidebrecht’s care, trusting him to be sensible. Boys came from as far as Coaldale, Seven Persons (near Medicine Hat), Rosemary, Gem, Edmonton and Calgary. He didn’t recall any of the boys getting lonely and wishing for home — he kept them too busy.

Dick laughed, recalling some of their shenanigans as, “Wild boys having a wild time at wilderness camp.”

Another highlight was the short-lived Camp Valaqua horse program. It ran a mere two years, 1968 and 1969, as those who were keen to add horses to the camping program couldn’t generate broad-based support. Heidebrecht owned six of the horses, other parents bought horses to add to the camp stable and he made arrangements to board others during the camp season so campers could enjoy trail rides.

The “wranglers” were mostly boys from Foothills Mennonite Church’s Adventure Club. These guys slept in a “camp kitchen” and were responsible for the horses' daily care and feeding. Heidebrecht chuckled remembering when they fenced a pasture that actually belonged to a neighbour not to Camp Valaqua. No one knew where the property line exactly was until the owner protested and thus, a short time after putting up the fence posts and wire, these boys were charged with taking it back down again.

Lawrence Braul, one of the Foothills Adventure Club boys, recalls being thrilled that he could spend time with his uncle as a young teenager. He felt like he was a vital part of the Camp Valaqua program. “We surprised ourselves with what we could do,” Braul says.

A common thread in Heidebrecht’s stories was how he challenged himself and others to do things they’d never done before. He is grateful that Camp Valaqua has become a community and that generations of his family, and many others, continue to enjoy the space and activities.

Heidebrecht often worked side by side with the late John Schellenberg, whose son, Jeff, continues to work at Camp Valaqua as manager. Their last time together was spent looking at old camp photos, swapping memories.

Heidebrecht still has “the greatest laugh.” 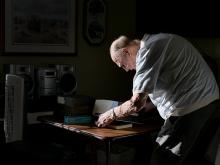 George Heidebrecht, who was instrumental in the early days of Camp Valaqua, fiddles with his slide projector. (Photo by Ruth Bergen Braun)