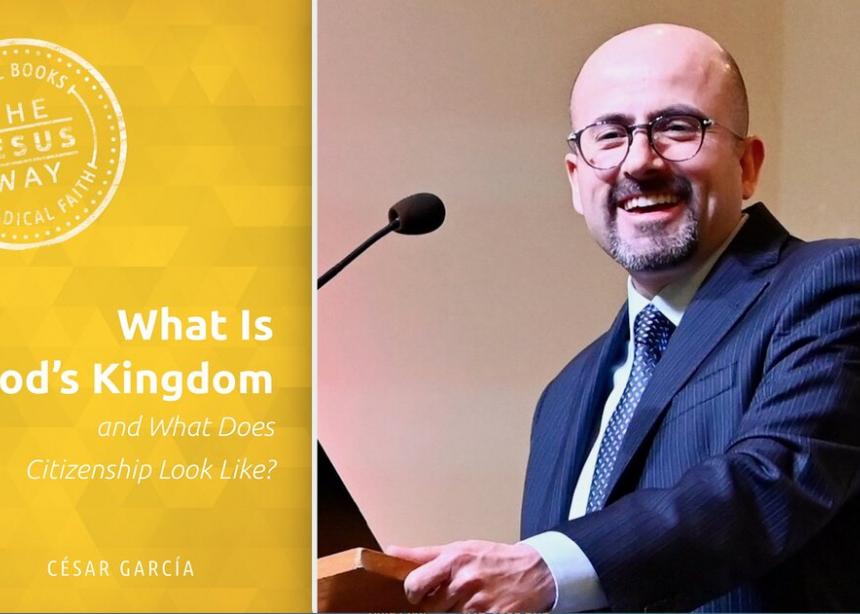 Mennonite World Conference general secretary César García is the author of the new book, ‘What is God’s Kingdom and What Does Citizenship Look Like?’ (Supplied photos)

What is God’s kingdom, and what does citizenship look like?

Mennonite World Conference general secretary César García explores these questions in a book published this past February. The book is part of The Jesus Way: Small Books of Radical Faith, a series from Herald Press.

Q: As a church leader, why did you decide to write this book? Why a book about politics at this time?

García: In my homeland of Colombia, our churches were so divided by partisan politics it was a nightmare. We were not able to speak about the ongoing peace process in our country because it was so divisive. Even among pastors in the same conference! Tensions arose because people were seeking church leadership for guidance. On social media, we found varying comments and even lies spreading and affecting our church members. We lacked material to speak about political engagement in a very simple yet deep way.

This, coupled with the realities of other countries going through similar things, is what birthed this book. This kind of polarization will stay with us for many years.

Q: In the book, you say Jesus’ message was political. Many people would be surprised to hear that. What do you mean?

García: Many people confuse politics with partisan politics. Politics matters because it is concerned with how our society is organized. It has to do with the way we think about money, how we relate to people who are different, and to marginalized people and injustice in society.

The message of Jesus was deeply political because he was speaking about a new way of organizing a society.

When Jesus uses the term “kingdom of God,” he is using political language. The term appears in the Bible around 140 times. When Jesus says, “The kingdom of God is here,” he’s speaking about a political reality, our way of organizing our society, our values, and the way we relate to each other.

The politics of governments are often in deep contrast with the different society of God’s kingdom. That’s why I say that Jesus’ message and life and mission are deeply political. He speaks about a new way of experiencing a new creation, a new society.

Q: In your book, you mention “exile politics” as your preferred model of political engagement. Can you speak to that?

García: When I was growing up in Colombia, some Christian churches were not recognized legally. We felt oppressed because we were not allowed to meet freely. People even attacked church buildings and threatened church leaders. Well, now that we have grown in numbers and all Christian churches are legally recognized, some churches have become the oppressors because many Christians demand laws that don’t take into account the freedom of minorities. There is a tendency to think Christians should be influencing politics from the top down. But there is another alternative.

In the Old Testament, there are voices that critique the Israelite monarchies descended from Saul and David, and see that form of government as an unfortunate stage in the people of God. In the end, ancient Israelites found themselves in exile. It is in that context that leaders like Daniel, for instance, were influencing society from a perspective of vulnerability.

That’s what I mean by exile politics. Daniel, along with the other exiles, were unified around a common identity as a displaced people at the margins of the empire.

This is the type of politics Jesus identified with—the wise leadership of Daniel in a context of oppressive empire rather than top-down power exercised by David.

What we are called to do is to invite people in a voluntary way to adopt good values.

Q: Much of the church has not talked about issues of social structure and how to engage with them. Do you think structures can be sinful?

García: Sin is more than individual behaviour. Sin has to do with the environment in which we live. When we look at the story of the fall in Genesis, humanity left paradise and found themselves living within structures that promoted sin and domination.

One of the first consequences of sin is when God mentioned that men and women would struggle for power over each other. Our societies naturally create structures of domination in which classes, races and groups oppress others.

That is what living into God’s kingdom means. God’s Spirit empowers us to live a different kind of society. We can then influence the societies of this world again in a way that is coherent with our values.

Mennonite World Conference general secretary César García is the author of the new book, ‘What is God’s Kingdom and What Does Citizenship Look Like?’ (Supplied photos)