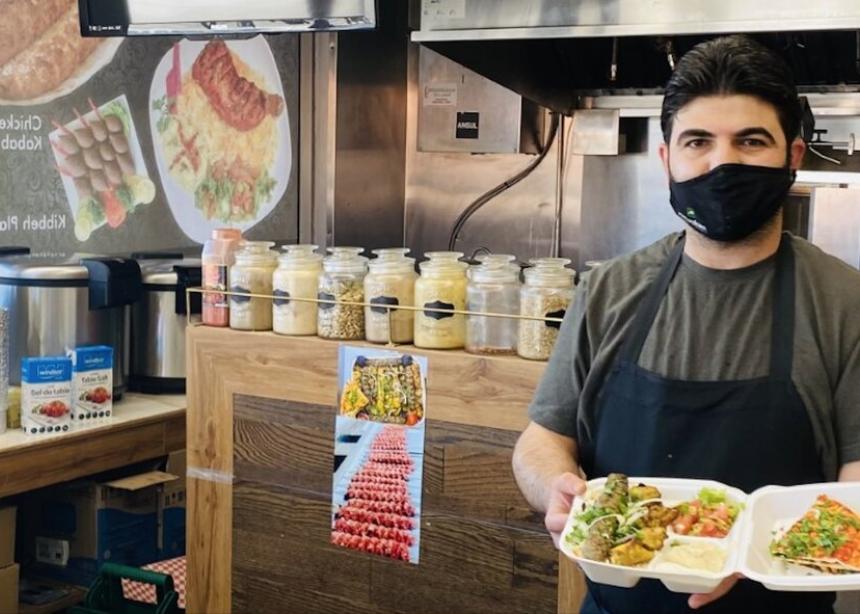 Refugee resettlement provides a new start for the families and individuals who have had to flee their homes due to conflict or disaster. Each of the 13,000 refugees who have been resettled in Canada through Mennonite Central Committee (MCC) Canada over the last 42 years has been offered a new opportunity. But when refugee sponsorship is reduced to only that, Canadians miss a much bigger truth—newcomers enrich their lives, too.

Each and every person that has the chance to start their life in Canada brings with them a unique personality and experience that only adds to this country. During the pandemic, a number of newcomers have stepped up to the front lines and are serving their neighbours in whatever capacity they can.

Syrian refugee Ali Mansour landed in Canada in March 2020, mere weeks before the global pandemic would cause widespread lockdowns, quarantining and travel restrictions. He quickly found a job at The Canadian Shield, a manufacturer of personal protective equipment (PPE) based in Waterloo, Ont.

“I love the co-operation, friendly people, mutual respect and healthy measures in place to protect staff and products,” says Mansour about his job. “I feel happy that I am helping the community in facing this pandemic. This is the community that saved me and supported me so that I could continue my life in peace and love.”

Shadi Alkhannous arrived in Canada from Syria with his wife Sultana and children Ghazal and Hussein in October 2016. They have since added a new member of their family, their son Mohammed.

Within a year of arriving in Canada, Alkhannous found a job as a meat cutter in a grocery store called Alnoor Halal Food Market in St. Catharines, Ont. Last year, he found an added layer of success when the store opened a take-out and delivery counter, offering meals like beef kabab and chicken shawarma.

He says he simply likes to help people however he can. He and his wife have helped a number of other newcomers find sponsors for family members still living as refugees and often meet newcomer families at the airport to assist with translation and other support.

“When people call me, I'm happy to do what I can for them,” he says. “I do the same as people did for me when I came new.”

Yodit Habtemariam works as a personal support worker at a retirement home in London, Ont. She is a more recent newcomer, having arrived in Canada from Eritrea in May 2018.

She points to the Bible to inform why she believes the hard work of people like her on the front lines is so important, particularly Jesus’ call to feed the hungry and clothe the naked, in Matthew 25.

Tsegereda Tsegay was sponsored for resettlement from Eritrea in Canada in 1987 and works at the same retirement home with Habtemariam. She loves working with the elderly, and says that being a front-line worker for the elderly is her honour because each of her residents is vulnerable and deserves to be protected.