Raúl O. García, the president of Mennonite World Conference from 1990 to 1997, died on Oct. 30. A long-term pastor, teacher and professor, he was born in Argentina on Aug. 26, 1930. Converted as a Mennonite from a Catholic family at age 14, his pastoral gifts were recognized and, 10 years later, he was appointed assistant pastor at Iglesia Evangélica Menonita Pehuajó, in a city inland from Buenos Aires. The next year, he graduated from university as a translator and teacher of English, and left for the United States to study at Goshen (Ind.) College Biblical Seminary. There, he re-encountered Anita Schwartzentruber, the daughter of missionaries in Argentina, and they were married on July 28, 1956. They returned to Argentina, where he played a major role in the development of biblical-theological education for South American leaders. Over the years, he served as board chair of the Mennonite Seminary in Uruguay and Paraguay, and board chair of the Argentine Evangelical Mennonite Church Conference. He was the first MWC president to come from Latin America. He was installed at the 1990 assembly in Winnipeg. He authored I Am A Christian Evangelical Anabaptist in English and Spanish that was also translated into Portuguese. In 2004, Goshen College awarded Raúl and Anita García its Culture for Service Award in recognition of their lives of exemplary service. García is survived by his wife Anita and their three sons. 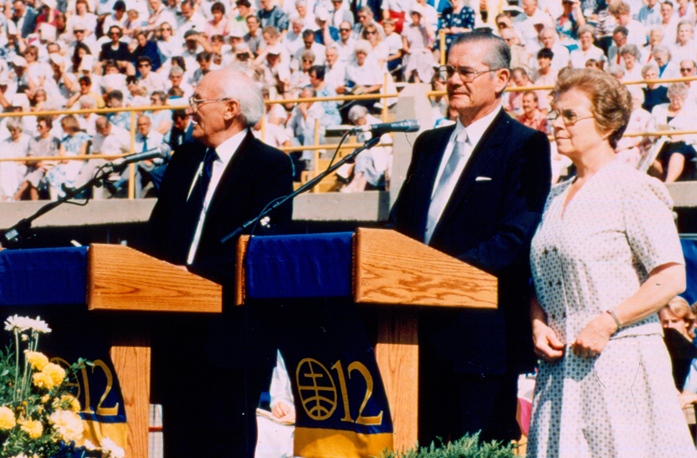 Raúl García (centre) was installed as MWC president at the Assembly in Winnipeg in 1990. (MWC photo)