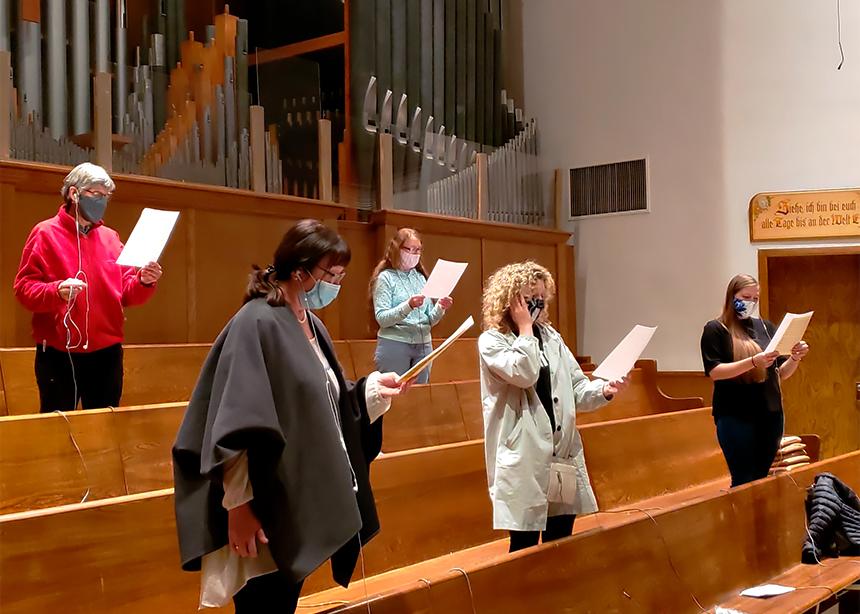 One sectionals of the First Mennonite Church Corona Choir records in the sanctuary. (Photo by Howard Rempel)

Hedie Epp has been singing with First Mennonite Church choirs on and off for 40 years. When COVID-19 hit and the Winnipeg church had to halt all its choral activities, it was difficult.

“For 10 months of the year, twice a week, we got together with the same people. . . and all of a sudden with COVID-19, we weren’t seeing any of these people and we weren’t singing,” says Epp, who has been attending weekly rehearsals for the last 17 years.

This absence was devastating not only for the singers, but also for listeners in the congregation. Karis Wiebe, conductor of the women’s choir, received a flood of emails from church members expressing their longing for choral music in the pre-recorded church services and their concern about the fate of the choirs.

First Mennonite is steeped in a rich musical legacy that began at its inception. It currently has a women’s choir and a mixed choir but formerly also had men’s, children’s and youth choirs. Three of four Sunday services a month feature a choir, and the choirs are well known for their First Advent and Good Friday concerts, at which they perform oratorios and other large works.

“The First Mennonite Church has an absolutely outstanding choral tradition and it goes back in history from way before my time,” says Yuri Klaz, conductor of the mixed choir since 2003; he also directs the The Winnipeg Singers and the Winnipeg Philharmonic Choir. “I honestly didn’t even see any other option but somehow to continue.”

Klaz, Wiebe and Ingrid Moehlmann, a former worship committee chair, joined together and the church’s Corona Choir was born. Starting in early summer, the choir began meeting to make music together, but the process was far from normal.

With Manitoba restricting indoor gatherings to 50 people and outdoor events to 100, they recorded in sectionals of five singers, grouped by voice part. Masked and physically distanced, they met outside, on verandas or in large indoor venues, such as the church sanctuary.

“We had all the Canada geese in the background singing along with us,” Wiebe says with a laugh, referring to recording outside on a choir member’s ranch.

Choristers sang and Klaz conducted along to a pre-recorded piano accompaniment, using headphones connected to an audio device by long extension cords and a five-way splitter. This was then mixed with the recordings of the other sectionals, to create the finished product, which was shared with the congregation online. Songs included Schubert’s “Heilig Heilig” and Oscar Peterson’s “Hymn to Freedom,” among many others.

“Not only were we able to make beautiful recordings, but the fellowship was there,” Wiebe says.

At least 40 choristers participated in dozens of recordings to make the Corona Choir a reality. “The response of the choir was absolutely amazing,” says Klaz. “This was like a glimmer of hope to many, that we were still doing something. . . . I certainly have a great appreciation and admiration to people who, despite all this trouble around us, went ahead and started doing this.”

Epp says it was uplifting to be able to see her fellow choir members and sing beautiful music together again: “These people are an important part of my life and I have missed them.” Being part of the choir made it easier to deal with the pandemic, she says.

Of course, this opportunity did not come without challenges: masks that muffled, creaky voices out of practice, the absence of harmony and trying to follow a recording while simultaneously watching a conductor.

Wiebe says, “It wasn’t the same, but because we were there together in spirit, still singing, knowing that it would make a beautiful recording, it was more than worth it—it was necessary.”

But learning all the technology required for the project was perhaps the largest hurdle of all. Wiebe says it was a big learning curve for the aging population that makes up most of the choir, but they worked hard and are proud of themselves for tackling it.

Klaz, too, poured countless hours into figuring out the technology, which was completely new to him.

“As a conductor, his area of expertise is weaving together sound in real time—now he is learning to be a sound engineer,” says Lori Klassen, another chorister. Klaz worked with former and current church choir accompanists to mix the tracks and create the recordings.

At the date of publication, the Corona Choir had temporarily paused its recording due to code red restrictions across Manitoba that prevent any groups from gathering. Klaz says they are still hoping to prepare some music for the Advent season, but it’s unclear what that will look like—it all depends on safety regulations.

Wiebe said that one day, when restrictions are lifted and the pandemic is over, First Mennonite’s choirs will be back stronger than ever. 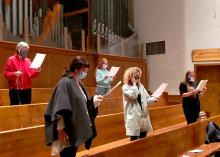 One sectionals of the First Mennonite Church Corona Choir records in the sanctuary. (Photo by Howard Rempel) 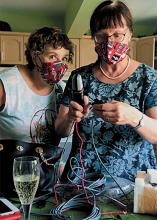 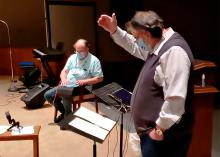 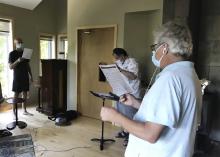 A group of basses rehearse under the direction of Yuri Klaz. (Photo by Ingrid Moehlmann)