Celebrating the past, anticipating the future 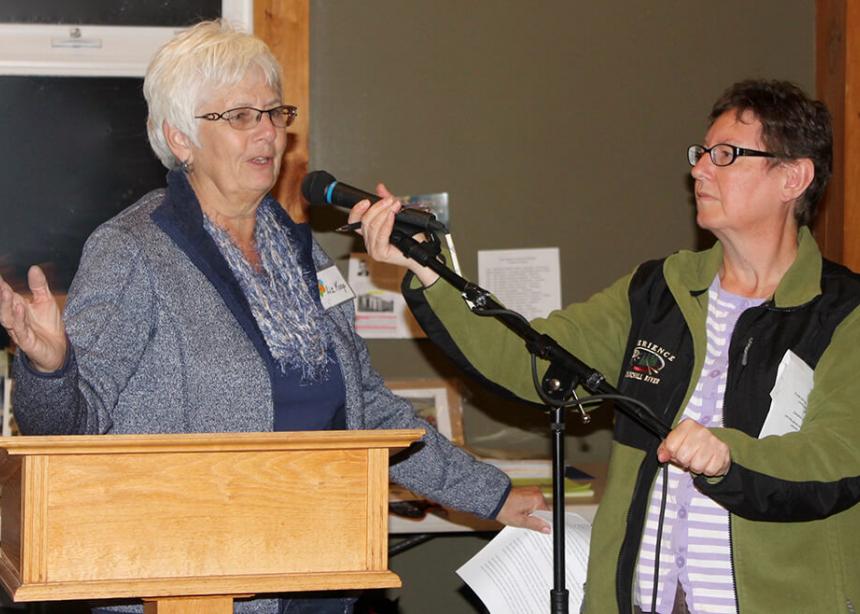 Bringing a long-standing and dearly loved institution to an end is not an easy thing to do. The members of Saskatchewan Women in Mission (SWM) have at least shown that it can be done with grace, thanksgiving and, yes, even joy.

When members voted to dissolve the organization at their annual Enrichment Day in April, plans were already underway for a fall retreat. That retreat, held Oct. 16 and 17, 2015, at Shekinah Retreat Centre, became a celebration of the role SWM played in the lives of women and also a time for envisioning what the future might hold.

The retreat began with an evening of sharing and reflecting on the past. Participants had been asked to bring items that represented their group in some way. Many of these items reflected the work they did for others. A tied quilt, a bandage roller and photographs of soap-making projects from earlier years told stories of service in the name of Christ. The Hoffnungsfelder Mennonite Women in Mission, from Glenbush, Sask., shared a photograph of the women’s correctional centre in Prince Albert, where, for a number of years, members visited regularly.

Some items were more symbolic than nostalgic. The women of Grace Mennonite Church, Regina, brought a bowl of jelly-beans, the different flavours and colours representing the variety of backgrounds and walks of life within their group.

Esther Patkau of First Mennonite Church, Saskatoon, shared the history of a beautifully embroidered quilt that was on display. When Helen Kornelsen, of Watrous, Sask., went to India as a missionary in 1948, Saskatchewan Women in Mission committed to paying her salary. That support continued until Kornelsen’s retirement in 1985. At that time, each group contributed an embroidered quilt block featuring the name of the group. These were pieced together around a central block depicting a map of Saskatchewan with the location of each member group. Many of the groups have since disbanded and a number of the churches featured are no longer part of Mennonite Church Saskatchewan.

Reflecting on the past continued next morning when Pauline Steinmann led the women in a time of lament, mourning the loss of SWM, and, for some, their local women’s groups. Steinmann invited the women to name their losses. “How has your world changed with this loss?” she asked.

Steinmann went on to talk about creativity, basing her thoughts on April Yamasaki’s Bible study guide, Spark: Igniting Your God-Given Creativity. “Creativity is a trust,” she said. “It doesn’t belong to us. It is to be exercised in service to God and others.” This isn’t always easy to do, according to her. “It means taking risks,” she said, but it also leads to joy.

In a prayer of thanksgiving, each woman came forward, picked up a prepared cup of water symbolizing her creativity, and poured the water into several common pitchers. Steinmann then poured the contents of the pitchers into a larger vase, which overflowed into an even larger bowl, showing how personal creativity, when combined with that of others, can grow until it overflows.

To aid the women in looking forward, Sharon Schultz, pastor of Eyebrow Mennonite Church, used pregnancy and birth as a metaphor for creativity and imagining what the future might hold. The story of Mary’s pregnancy from Luke 1 illustrates how, in spite of her fear and uncertainty, Mary trusted God to guide her, said Schultz. In the same way, she told her audience that they can trust God to walk with them into an unknown future. And just as God provided Mary with support in the person of Elizabeth, he also “has given us each other, sisters, to walk together and dream together,” said Schultz.

Forming a large circle around the room, the women were given candles, which they lit in turn, passing the flame from one woman to another. With their left hands on the shoulders of their sisters and their right hands holding their lit candles, the women ended the retreat with a prayer for God’s guidance.

What the future holds for MC Saskatchewan women is unclear. The outgoing SWM executive circulated a job description for a women’s representative who will sit on the area church council and coordinate future women’s retreats. Meanwhile, the women of Zoar Mennonite Church, Langham, volunteered to plan next year’s retreat.

See also “Imagining open spaces in the midst of transitions” 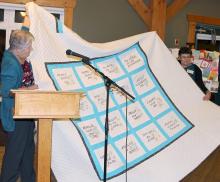 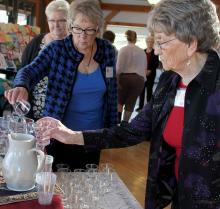 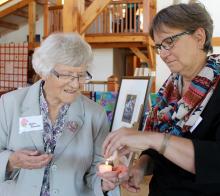 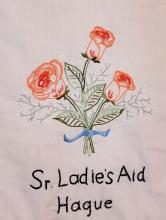 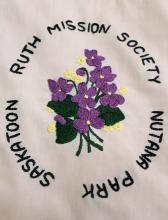