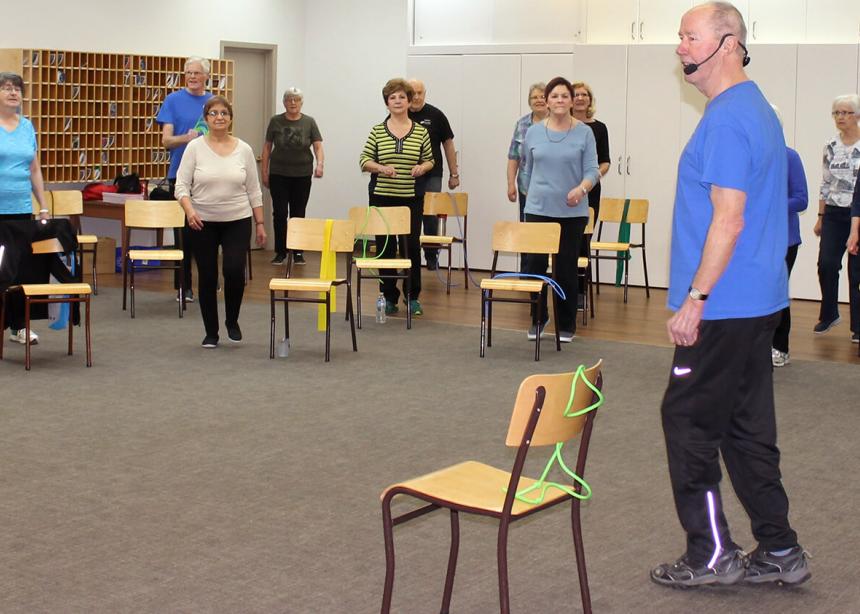 Retired physician Arnie Nickel, wearing the headset, is one of five volunteer trainers who lead the Forever in Motion Club that meets at Nutana Park Mennonite Church in Saskatoon. (Photo by Donna Schulz)

Everyone’s welcome, it’s free of charge and refreshments are served. Those selling features should attract Mennonites by the dozen. Surprisingly, though, most participants in Nutana Park Mennonite Church’s seniors exercise club aren’t Mennonites at all.

Five-and-a-half years ago, Walter Wall approached his congregation about starting an exercise program for seniors. The Saskatoon Health Region offered training for volunteer leaders for a program called Forever in Motion. Wall and Arnie Nickel took the training and became the first leaders of the church’s Forever in Motion Club.

“There are a hundred clubs across the city, but ours is by far the most active,” says Wall, noting that meetings in the church’s fellowship hall happen three times a week, year round, even on statutory holidays.

Patrick Preheim, one of the church’s pastors, says that initially most of the club’s participants were church members. But that changed as people from the community started joining.

Three years ago, June Giles became the group’s coordinator. She invited her yoga class to attend, and participation soared. Now the group regularly accommodates 25 to 30 exercisers, with attendance sometimes climbing to more than 35.

Giles says that she and her husband Howard started attending Nutana Park six years ago because “there always seemed to be something going on” at their neighbourhood church. “I didn’t know you didn’t have to be born Mennonite,” she adds with a chuckle. The welcome they received from the church made her readily agree to take on the role of the club’s coordinator. “We were welcomed so warmly, it’s easy to welcome others,” she says.

Today, most participants have no connection with the church other than the exercise group. They represent a broad range in both age and ability level, but, as Giles points out, the group’s motto is, “Come when you can; do what you can.” Although participation is free, a collection is taken once a year to cover the cost of the coffee and cookies served at the end of each session.

When some participants quit attending because they couldn’t hear the trainer’s directions, the church purchased a cordless, hands-free microphone for the club to use; the club also contributed to the cost of the microphone. Recognizing that the activities are hard on the flooring, the club also took a collection to help pay for new carpeting in the hall.

“Each trainer adds uniqueness,” says Nickel, a retired physician. He uses his medical background as he leads the exercises, but adds, “I don’t try to push them.” He sees regular exercise as important for both the physical and mental well-being of participants.

Exercises develop flexibility, strength, cardiovascular endurance and balance. Wall says that he finds it rewarding to notice how much some regular participants have improved over the years.

Howard Giles underwent triple bypass heart surgery 18 months ago. He says that when the surgeons learned he participated in regular exercise through the Forever in Motion program, they moved his surgery date ahead because they were confident he would recover well.

Preheim isn’t sure whether the program should be considered a ministry of the church but says the club is “lowering the barriers between community and congregational life, and the more ways we do that, the better.” He adds, “I think it’s ministry insofar as we’re creating space for the community, and opening up additional avenues for God to work in people’s lives.” He also wonders, though, whether “maybe we can learn some things from the way this group conducts itself, such as ‘how do we welcome new people?’ ”

Retired physician Arnie Nickel, wearing the headset, is one of five volunteer trainers who lead the Forever in Motion Club that meets at Nutana Park Mennonite Church in Saskatoon. (Photo by Donna Schulz)

June Giles, left, is the coordinator for the Forever in Motion Club that meets at Nutana Park Mennonite Church in Saskatoon. (Photo by Donna Schulz) 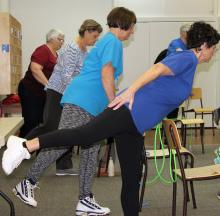 Stretching is an important part of the exercise regime of the Forever in Motion Club that meets at Nutana Park Mennonite Church in Saskatoon. (Photo by Donna Schulz)