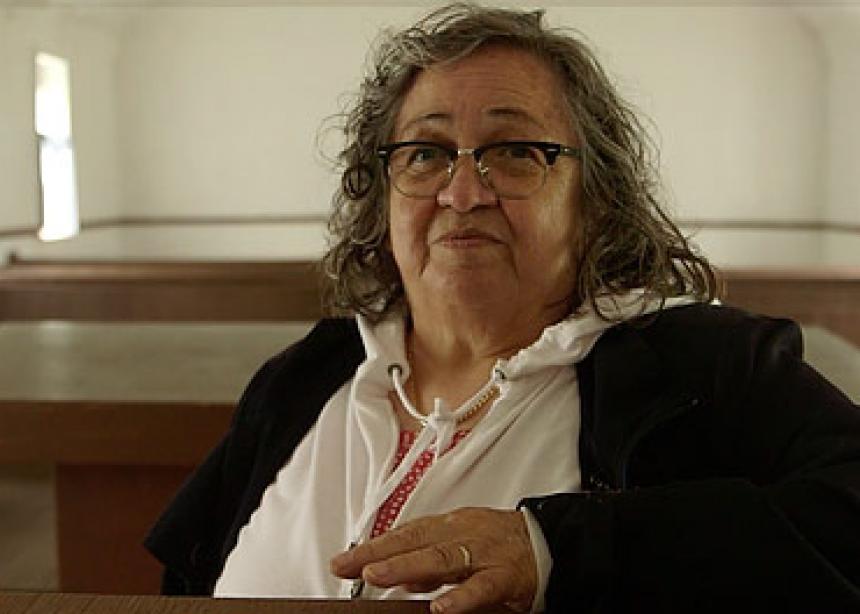 Screen shot from For Love of a River. (Photo courtesy of Rebel Sky Media)

Manitoba filmmakers Brad Leitch and Will Braun have brought the reality of settler-indigenous reconciliation work in Canada to the public screen.

For Love of a River: Two Stories of Loss and Longing tells the story of two hydro dams built in northern Manitoba, including the highly controversial Keeyask generating station; the families they displaced; and the cherished lands they swallowed up. The co-directors partnered with the Interchurch Council on Hydropower to produce the film. The documentary Reserve 107: Reconciliation on the Prairies, also directed by Leitch, is about a controversial land claim over the town of Laird, Sask., once only the subject of rumour.

The two short films were shown as a double-feature at the most recent Sam’s Place monthly film night on April 10. Sam’s Place, a project of Mennonite Central Committee Manitoba, is a hub of activity, community and opportunity in Winnipeg’s Elmwood neighbourhood. Their film nights are a staple for Winnipeggers who strive to move through life “with eyes wide open.”

These two films, while comparatively small, fit right in with the tenor of previous features like Ava DuVernay’s Oscar-nominated 13th, and drew just as good a crowd. Both directors and Ellen Cook, a Cree elder and co-chair of the Interchurch Council on Hydropower, were on hand to answer questions after the screenings.

For Love of a River was shown first, drawing attention to the often white-washed social and ecological violence of hydro damming.

Braun noted that, because hydropower is carbon neutral, it is often passed off as “eco-friendly” as well, but the reality is not so simple. Sturgeon are a cherished species among first nation communities in the Canadian North, and part of the local traditional diet, but for 20 years after a river is dammed for hydro, the flood-plain waters will not be fishable due to excessive mercury that leaches out from the troubled soil.

Cook said that when the dam was first built near her hometown of Grand Rapids, boaters found coffins floating in the water—evidence of sacred burial grounds destroyed by the aggressive flooding. “It’s against the law to disturb human remains, but Manitoba Hydro gets away with it,” she said. “The graves are being destroyed.”

There was no consultation with the Cree nation before the Grand Rapids dam was built, and some residents along the floodplain were forcibly removed. In other cases, as with the Keeyask project, Cook said that misleading promises of financial gain for the community created division between those who would reject the project on ecological grounds and those who hoped for a chance at prosperity.

David Pankratz, a film night attendee, asked, “Has any community been able to turn back a hydro dam, or decline the project?” Braun answered with sad simplicity: “No.”

A general cry of “What can we do?” arose from the crowd, but Braun explained that the film underlines one of the most difficult elements for settlers, that of rebuilding relationships with their indigenous neighbours, especially in southern Manitoba, where annual flooding is a threat from which locals are protected by the government, not a development forced upon them by big business. “Really, what’s needed is just to hold these stories of pain and loss,” he said. “It’s not fun, it’s not as sexy as ‘let’s go stop the dam!’”

As in his film, there was little to be had in the way of a satisfying conclusion for those who watched For Love of a River.

Reserve 107, however, brought a welcome wash of hope over the room. Leitch explained that this was the first time these films have been shown together despite their intimately linked themes.

The benefit of this juxtaposition for both films’ messages cannot be missed. In Reserve 107, a local group of Lutherans and Mennonites learn that the nearby Young Chippewayan First Nation holds a legitimate historical claim to the land they now inhabit, once called Stoney Knoll Reserve. The townspeople fear a confrontation is in store, but the discovery prompts a hereditary Young Chippewayan chief to extend an invitation instead, welcoming the people of Laird to forge a new bond of friendship and mutual care with the first nation. The party and the pact that ensue are evidence that holding one another’s stories need not always be painful or guilt-ridden. Sometimes, making peace gets to be fun.

See also:
‘They’re destroying our home’
Land is the heart of the matter
Beyond guilt and lament

Screen shot from For Love of a River. (Photo courtesy of Rebel Sky Media)