‘We don’t have to stop just because someone says no’ 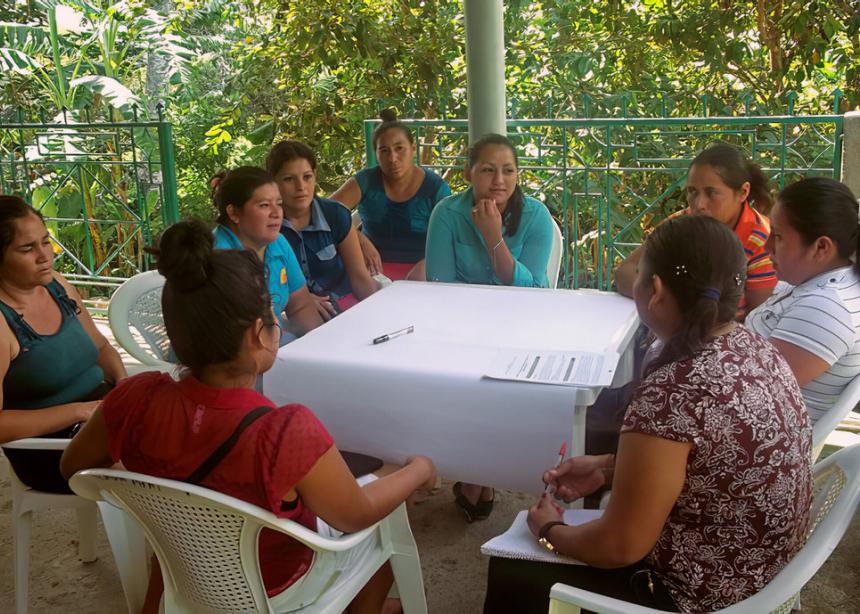 Women talk about concerns facing them in their village, giving a representative from the women's advocacy group information to share with representatives from other villages, in this 2014 photo. Together the representatives decide what issues to take to the mayor. (Photo courtesy of ANADES)

Ana Iris Constante says she used to be nervous just to introduce herself.

“We have learned that they will say no, but we can keep going,” says Constante. “And we don’t have to stop just because someone says no.”

Constante, who lives in Los Montes, El Salvador, is one of more than 300 female political advocates in her municipality of Cuisnahuat. Asociación Nuevo Amanecer de El Salvador (New Dawn Association of El Salvador) has supported and trained them to speak up through its partnership with Mennonite Central Committee (MCC).

For the past few years, the women have been pressuring their local governments to address climate change.

“Women are the ones who carry the commitment for the family, take care of the family and try to get food for everyone,” says Zacarías Bernabé Martínez, who works with New Dawn as the coordinator for its community development program. When resources like food and water become scarce, he said, women take on the additional burden.

Climate change is taking its toll across El Salvador. Constante says that the rivers are drying up and no longer yield the same amount of fish, crawfish and crabs that women once collected to feed their families.

Constante’s fellow advocate, Rosa Estefanía Carillas from the village of Palmarcito in the Cuisnahuat municipality, says that a lack of rain makes it hard for women to grow gardens to feed their families.

People are experiencing shortages from municipal water sources, too, as droughts worsen and large companies try to privatize water for their own benefit. For women, who are often tasked with providing water for their families, this can mean time-consuming walks to available water sources or waiting in long lines at municipal faucets.

To Constante and Carillas, who see these problems first-hand every day, these observations are more than grim realities; they are also valuable data. They know these facts will strengthen their arguments the next time they petition their municipal government.

Constante and Carillas both serve as representatives of the women’s advocacy groups in their villages. They meet with these groups, which have between 25 and 45 women, to gather concerns at the village level. Then they meet with representatives from Cuisnahuat’s eight other villages  to decide on the region’s most pressing issues to bring to the mayor.

Next, the representatives travel to the mayor’s office. They request his presence at an assembly of all the women advocates in Cuisnahuat, so he can answer to their petition and discuss any questions.

“That process is challenging because there are often times when the mayor will say no, or won’t show up, or will complain about the meeting space,” says Carillas. “Often it requires follow-up to go again and again when they don’t show up to the assembly.”

Although pressuring the government is a slow process that requires constant repetition and follow-up, several years ago the women scored a major victory by establishing a municipal office dedicated to women’s issues. The office pushed for public health institutions to focus more on women’s health, especially with the health risks posed by climate change. It also provided agriculture and nutrition training designed to help women cope with the changing climate.

However, Martínez says, elections in El Salvador tend to bring about dramatic change. In a blow to the advocates’ years of effort, the most recent mayor of Cuisnahuat defunded the women’s municipal office when he took charge. “They [the advocates] learned that you have to fight really hard to get a success, and then you have to fight sometimes even harder to keep it,” he says.

But the advocates have built resilience over the years, and they continue to push for the betterment of El Salvador’s women and the populace as a whole. In Cuisnahuat, they are currently pressuring the municipality to close a garbage dump serving the entire western half of El Salvador that is posing environmental and health risks.

They are also trying to pass legislation to make water a freely accessible human right rather than a privatized resource. Additionally, they want the government to provide agricultural and other programs that help women adapt to the changing climate.

When Constante thinks about her hopes for the future, she thinks of her three daughters, ranging in age from 5 to 15. “I want to make sure that all I’m learning, whether in civic participation or in agro-ecology, I’m passing it on to them,” she says. “Because I’d love for them to be empowered to have a vision for their life in the future, so we can fight for them in that vision.” 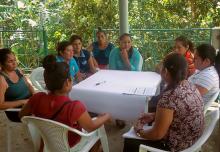 Women talk about concerns facing them in their village, giving a representative from the women's advocacy group information to share with representatives from other villages, in this 2014 photo. Together the representatives decide what issues to take to the mayor. (Photo courtesy of ANADES)