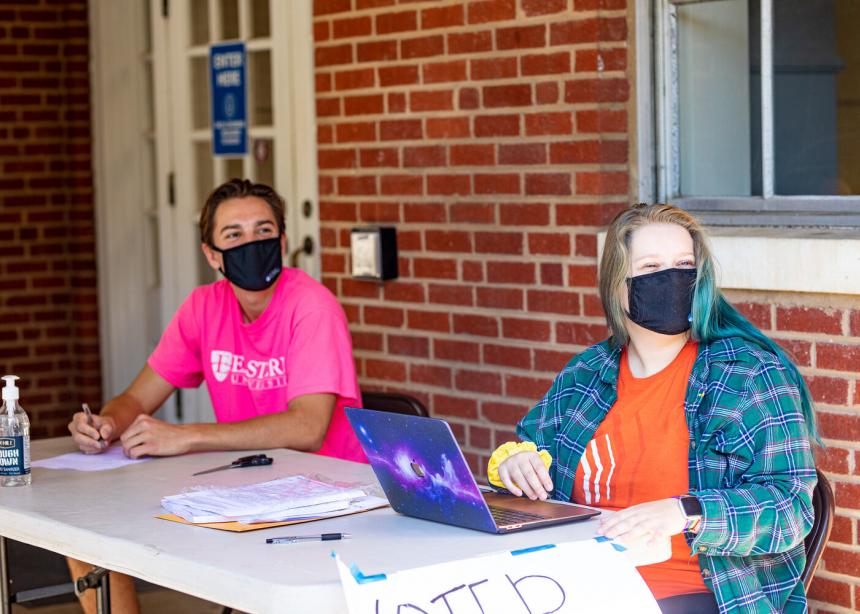 Two clubs at Eastern Mennonite University in Harrisonburg, Va., did their best to get out the vote this month ahead of the Nov. 3 presidential election—and contrary to the fraught and divisive national scene, they did so harmoniously.

The effort, which included a jointly staffed booth on multiple days outside the dining hall and one virtual evening session, was intentionally “bipartisan,” according to Adam Peachey, co-president of the College Republicans, and Luke Wheeler, co-president of the Young Democrats. EMU’s Student Government Association, an elected group of student leaders, helped to start the conversation and contributed staffing.

“SGA thought this drive would be a perfect opportunity for the political clubs on campus to lead together and show unity during this extremely polarizing election season,” said Theo Yoder, SGA vice-president. “We hope that we made a difference in our community by helping give students the opportunity to practice their right to vote. SGA is also planning to work closely with them in the future to plan more events revolving around this election.”

The clubs have also met with faculty, staff and administrators to consider ways to promote respectful and civil dialogue about the debates and the election in the coming weeks.

Publishing a joint statement, via email to the campus community, was one high-profile way that group sought to elevate discourse, urge empathy, and raise awareness about how some aspects of the current election were impacting more vulnerable members of the community, specifically those “lacking in physical safety or an empowered voice.”

The message lifts up EMU’s community-building values and a shared priority to “move through these next weeks rooted in the values that define EMU as peacemakers rooted in Christian understandings.”

Here is an excerpt from the email, sent on Oct. 16, which invites readers to take action:

A convocation on Oct. 28, which will include some of these same student leaders, will focus on the value of civic engagement and “promoting community values in this politically polarized time,” Peachey said. “We want to focus on ways to depolarize or handle things in ways that people can maintain or even find new friendships despite political differences.”

Also on Oct. 28, historian and author Rick Shenkman, of George Washington University’s History News Network, will speak in a university colloquium on “Why is Democracy So @#$&!  Hard?” The event from 4:15-5:15 p.m. EDT will be livestreamed on EMU’s Facebook page.

“We have specific ‘Life Together’ commitments which help to guide us all into situations like this,” said Shannon Dycus, dean of students, who convened the meeting.

“We want and need our students to be engaged civically. What does it look like to listen respectfully and share our opinions in ways which show compassion and build relationships? As we all care about and contribute these discussions as contributing citizens, centering our commitments towards wisdom, accountability and Christian peacebuilding help us do this in the right spirit.”

The voter registration drive was the main focus of the two clubs, especially because other events, such as debate or election night watch parties, have been difficult to plan with COVID-19 precautions for in-person gatherings, Peachey said.

Sponsoring a voter registration drive shows that EMU’s student leadership holds representation at the polls to be an important individual right, the two leaders said.

“...Both clubs agree that the more people that vote, the more representative our government is and that, even if the people we are registering disagree with us politically, we still want those people to be represented,” Wheeler said. “Our desire for a representative election was a big driving force for the collaboration and SGA also helped to connect us and to encourage the bipartisan effort.”

The voter drive is also an effort to encourage healthy ways of participating among the student body, Peachey said. The volunteers helped students check if they were already registered, register to vote in Harrisonburg or apply for an absentee ballot, he said.“Especially with covid, we want to encourage other options besides driving home to vote.”

Reflecting on his experience, Peachey said that while EMU has “a reputation as a liberal campus,” he’s experienced “a lot of affirmation of anyone expressing different views.”

“I’ve been encouraged by a lot of discussion going on about fostering a better political environment on campus and the desire to hear from both sides of the political spectrum,” he said.

For his part, Wheeler says he’s learned a lot in “really productive and interesting” conversations with Peachey.

“I have learned that we really are not that different, even with what might seem like vastly different views on the surface,” Wheeler said, adding he appreciated Peachey’s “devotion to the political process and to helping everyone to vote,” even as they may not share the same political views.