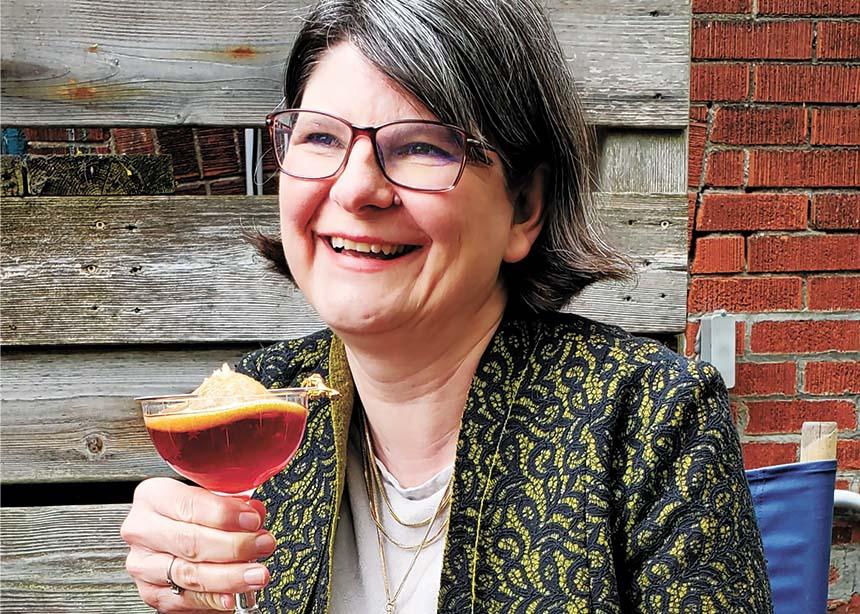 Amateur mixologist Sherri Klassen is the author of Menno-Nightcaps. (Photo by Emma Klassen-Brulé)

There are countless Mennonite cookbooks, but last month saw the debut of what is likely the world’s very first Mennonite cocktail book.

Menno-Nightcaps: Cocktails Inspired by that Odd Ethno-Religious Group You Keep Mistaking for the Amish, Quakers or Mormons arrived on bookshelves on Oct. 12 via B.C.-based publisher Touchwood Editions. Written by Sherri Klassen, the book includes cocktail recipes accompanied by trivia on Mennonite faith and cultural practices.

Mixing alcohol and Anabaptist info isn’t new for Klassen. In 2013, she began a Mennonite humour and cocktail blog called The Drunken Mennonite at slklassen.com. At the time, she was writing a novel and found herself editing out the funny parts. The Drunken Mennonite became her outlet for exploring the humorous aspects of being Mennonite.

One of Klassen’s daughters told her about the comedy television series “Drunk History,” in which an inebriated narrator recounts a historical event while actors enact the anecdotes and lip sync the dialogue. Inspired by the show’s title, Klassen decided she would be the Drunken Mennonite.

“I had also, at the same time, discovered cocktail blogs, and I just thought they were very earnest and esoteric,” Klassen explains via Zoom from her home in Toronto. “In 2013, the only things on [the internet about Mennonites] were earnest and esoteric, and I thought, wouldn’t it be funny to pull those two things together?”

Klassen, who has a doctorate in history and works at the University of Toronto, has no training as a mixologist and barely drank cocktails prior to starting the blog. She trained herself by reading the cocktail blogs she had discovered.

“I never really thought at first that people would make the cocktail recipes [on The Drunken Mennonite], but they did, so I thought I should start making them better,” says Klassen, who attends Toronto United Mennonite Church.

Although she has a presence on a handful of social-media platforms, Klassen is best known on Twitter, where she employs her dry wit to comment on Mennonite news and interact with people tweeting about Mennonite culture. A few people on Twitter suggested that she write a book, an idea she started to take more seriously when people in her offline social network started encouraging her to do it.

A list of substitutions makes it easy to create non-alcoholic versions of the beverages for children and teetotallers to enjoy.

Each recipe includes a short anecdote drawn from Mennonite history.

“For Mennonite readers, I hope they’ll get a laugh and be reintroduced to some little tidbits of history and their faith and culture,” Klassen says. “I hope it will lead them to explore further some of these topics. For non-Mennonites who read it, I hope they learn a little about Mennonites and also enjoy it, and that it will shatter some of their stereotypes.”

Ultimately, Klassen hopes that exploring the book is a joyful experience for readers. When asked what impact writing the blog and interacting with others on Twitter has had on her faith, she says that it has led her “to have a more expansive faith with a greater openness to joy.”

“I have learned, too, that having a joyful faith does not mean pulling away from critiques, or recognizing when institutions or power structures do damage,” she says. “But it means learning to laugh at our follies that might be embedded in pain or in our desperate efforts to be less imperfect than we are.”

Last call with the Drunken Mennonite

Canadian Mennonite asked Twitter users if they have questions for Sherri Klassen. Here is what they wanted to know. This interview, which took place last month, has been edited for length and clarity.

@Matthew_Froese asks, “October is Pastor Appreciation Month. What’s the best liquor to give to a pastor?”

Klassen: I think you should give them a cocktail and it should be personalized for the pastor. Just go through the “Faith and Libations” section of the book and find one that suits what the pastor likes to talk about. Make it in your own little mason jar and put a little ribbon around it.

Klassen: There is one cocktail in the book that has yerba maté in it; I was told I definitely needed to have one. [You can find the recipe for Yerba Maté-Infused Vodka on page 146.] It has a strong enough flavour on its own that putting it with vodka isn’t a bad idea.

Klassen: A nice crisp rosé is very nice. If you want a cocktail, the Last Wurst is good. It’s also in my book [page 133]. It’s a variation on the Last Word. It’s something kind of sharp to cut through that delicious, fatty food.

Klassen: I have a paska sour, which is a variation of a pisco sour. It actually goes really nicely with paska.

@hiebzky asks, “Any way to integrate schmaunfat (cream gravy) into a White Russian? Seems like a no brainer.”

Klassen: I tried that once. Don’t.

Klassen: I am not. I know people think that I am, but no. I’m hoping that, on my deathbed, @FreundschaftPhoto will appear and unmask themself, like in a Victorian novel.

@carol_penner asks, “What do you think was Menno Simons’ beverage of choice?”

Klassen: In Holland they had a big molasses trade, so there’s this legend about him falling into a barrel of molasses. He would definitely have had a cocktail that had molasses in it. That would be his favourite.

Klassen: No, I’m not touching that question. Are you kidding me?

You can participate in a virtual event with Sherri Klassen next week. McNally Robinson presents A (Virtual) Evening of Menno-Nightcaps on Friday, Nov. 12 at 7:00 p.m. CT, featuring Klassen in conversation with The Daily Bonnet creator Andrew Unger. Click here for details.

This article appears in the Nov. 8, 2021 print issue, with the headline “Cheers to that.” 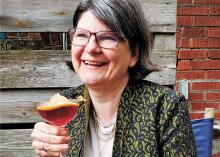 Amateur mixologist Sherri Klassen is the author of Menno-Nightcaps. (Photo by Emma Klassen-Brulé)