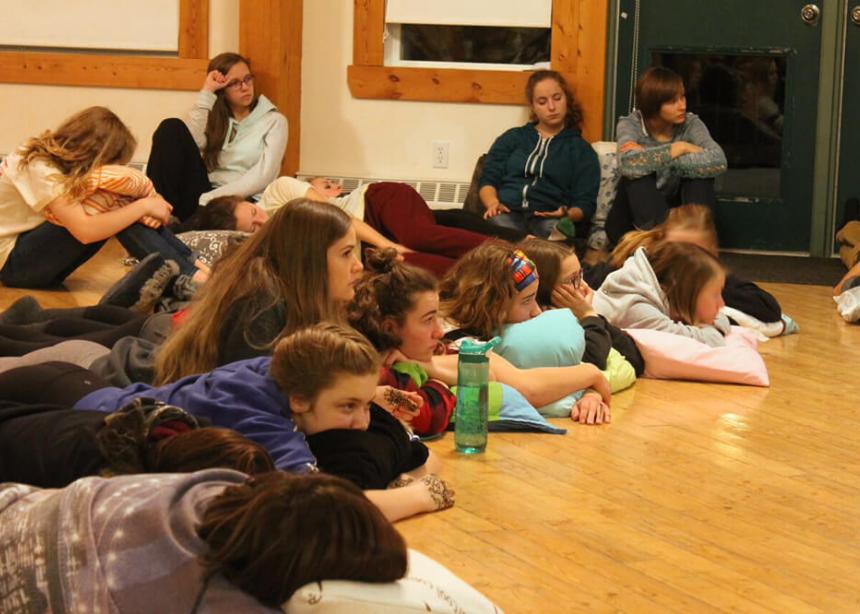 Guest speaker Cory Funk addressed the theme “Sharing the well: faith and diversity in a time of fear and division.” As a graduate student of religious studies at Memorial University in St. John’s, Newfoundland, Funk is researching what it means to be Muslim in Canada and, in particular, how Canadian Muslims are using the Internet to express their faith. As part of his research, Funk has created videos of Muslims telling their stories.

One of his goals in speaking at the retreat was to allow youth to hear these stories and recognize that Muslims have much in common with Mennonites. “There are many similarities between Muslims and Mennonites in the way we practice our faith,” he said. For instance, many Muslims share the Mennonite passion for social justice issues.

“There has been lots of media attention on Islam,” said Funk. But in order to understand the Islamic faith one must first understand Islamic identity. “You can’t talk about religion without talking about identity,” he said. He referred to a Muslim friend who says wearing the hijab is part of her identity. It is “both an expression and a reminder of what she believes in,” said Funk.

To encourage the youth to think about the meaning of identity, Funk asked Krista Loewen, youth pastor at Wildwood Mennonite in Saskatoon, to talk about her identity as a Mennonite pastor. Loewen said that when people outside the church find out she is a pastor they often assume she is going to judge them. She said she is aware that “there is a lot of social censoring that happens” in her presence. In spite of that, Loewen said she appreciates her identity as a Mennonite pastor because it opens doors to conversations about faith. She also admitted, “My identity as a Christian is almost always in flux.”

Another of Funk’s goals for the weekend was to equip the youth to build their own relationships with Muslim friends and neighbours. “We don’t have to agree but we do have to listen and understand,” he said. “The more stories we hear the more we understand.”

Through video, Funk presented the stories of Kobra and Joel, a young Muslim couple who shared their views on marriage and their involvement in social justice issues. He cautioned the youth not to make generalizations about Muslims or any group of people, but rather to listen to their individual stories.

“The more we listen to stories the more we can make Canada a place where everyone is accepted,” he said.

Funk gave the youth some hands-on ideas for getting to know Muslims, suggesting they might ask to attend a service at a local mosque and then invite Muslim friends to attend one of their church services. They might also invite Muslim friends to share a meal with them or join them in a service project or social justice initiative. During the final session, members of the Ahmadiyya Muslim Community joined the youth to talk about ways they could build relationships with one another. “There were some really great and productive conversations,” said Funk.

Marcus Kruger, a retreat participant and member of the SMYO committee, appreciated what Funk had to say and recognized that the wisdom in Funk’s words can apply to any relationship. “Going into any relationship with an open mind and an open heart” is important, he said. Zachary Stefaniuk, another SMYO committee member, said he was surprised to learn just how much Mennonites and Muslims have in common.

Kirsten Hamm-Epp, area church minister, youth programming for Mennonite Church Saskatchewan, said that about 30 youth and 14 sponsors and adult supporters attended the retreat. She added that a number of them registered for the retreat specifically because of the chosen theme.