Coming together over Deuteronomy 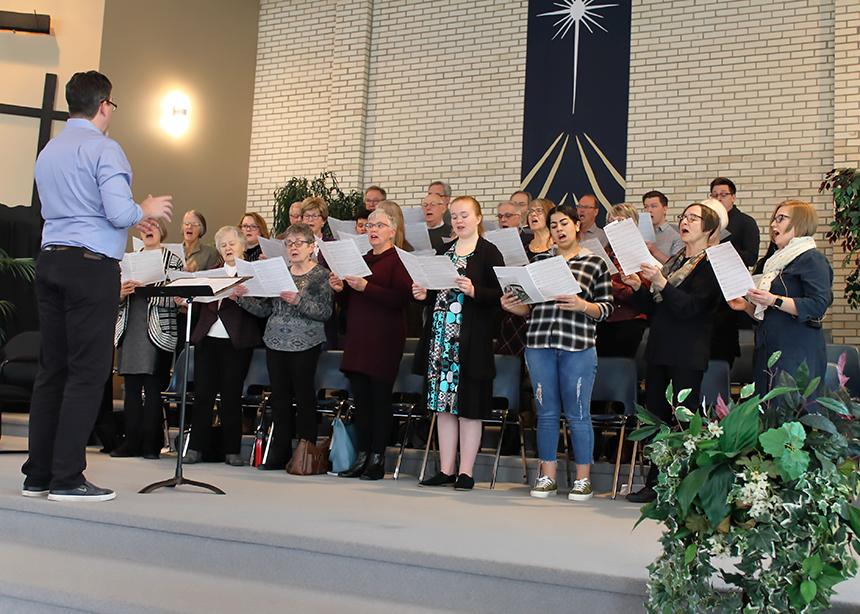 Some participants in Gerald Gerbrandt’s short course on Deuteronomy opt to be part of a choir, led by Richard Janzen, that performed during the joint morning worship service on Feb. 9. (Photo by Donna Schulz)

Five Mennonite Church Saskatchewan congregations collaborated recently to provide a weekend of learning for their members.

His course is offered as part of the Portable CMU program, which involves university instructors bringing three- or four-session seminars on various topics to congregations across the country.

The sessions, presented at Rosthern Mennonite from Feb. 7 to 9, were well attended.

“We were expecting 25 to 30 people,” said Claire Ewert Fisher, Rosthern Mennonite’s interim pastor. Instead, she counted upwards of 70 participants on the evening of Feb. 7, and the next morning’s showing was equally strong.

It is, perhaps, surprising that a course on Deuteronomy should draw such a crowd. The book “suffers from a bad reputation” and is often considered “boring and irrelevant,” said Gerbrandt, adding that this reputation is undeserved. Rather, Deuteronomy is “the most influential book of the Old Testament,” he said.

Gerbrandt, who wrote the 2015 Believers Church Bible Commentary on Deuteronomy, believes the book is unpopular because readers think of it as law, and they think of law as it’s understood today.

“Unfortunately, we read parts of the Bible that we associate with law in the way we approach law, [as if they were] telling us how to live our lives,” he said. “We have [observed] many of those laws very strictly and made huge battles over them, and others we have ignored entirely.”

He invited participants to view the Bible differently. Rather than reading it as a rulebook, he said, they should think of it as a large painting, with each part adding to the whole. “On a macro level, the Bible tells us that God created and loved the world, and that we messed up,” he said. “[It also tells us that] God doesn’t give up on us.”

The message of Deuteronomy is simple, according to Gerbrandt. “God is giving Israel a gift, and Israel is invited to live responsibly with that gift,” he said.

One of Deuteronomy’s central themes is Israel’s election as God’s chosen people, but the book makes clear that they were chosen not because of their size or their righteousness, but because God loved them. “It’s absolutely foundational that . . . God chose Israel and . . . Israel didn’t deserve it,” he said.

“If we’re uncomfortable with the idea that Israel was elected,” he said, “how do we explain our own privilege?”

In response, Kathy Luitjens cited Jesus’ words from Luke 12:48: “From everyone who has been given much, much will be demanded.”

Gerbrandt agreed, saying, “The Old Testament doesn’t see Israel’s election as a privilege but as a responsibility.”

Although the Promised Land was given to the Israelites as a gift, they were expected to respond to that gift by loving God and obeying God’s commands. The Shema, found in Deuteronomy 6:4-5, instructs Israel to love God with heart, soul and might, or, as Gerbrandt said, “with everything you’ve got.”

“The starting point is to love God back,” he said. “The way we’re expected to act should be modelled on God’s love.”

Throughout Deuteronomy, he said, the people of Israel are called to be separate from the nations around them. They are to worship differently and they are to live differently.

“I’m not sure that Deuteronomy speaks to our time,” she said, arguing that it spoke better to earlier times, when Mennonites were developing their identity as a people separate from the world around them.

Gerbrandt countered: “In 1950 I would have preached that the point of Deuteronomy is not to create a people but to break out of that and preach the mission in Genesis 12 [where God calls Abram to leave his home and promises to bless all the peoples of the Earth through him],” said Gerbrandt. “[But Deuteronomy] may be more of a book for today than it was in 1950. One of the messages from Deuteronomy is that we really need to be a people in the 2020 world in which we’re living.”

As if to prove Gerbrandt’s point, the five congregations met together for worship on Feb. 9. A mass choir, formed for the occasion, performed several pieces, and Andrea Enns Gooding, pastor of Zoar Mennonite, led in communion.

The weekend ended with a potluck noon meal and more than one voice exclaiming, “I think we should do this again next year.” 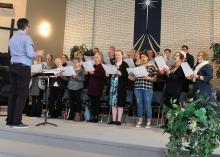 Some participants in Gerald Gerbrandt’s short course on Deuteronomy opt to be part of a choir, led by Richard Janzen, that performed during the joint morning worship service on Feb. 9. (Photo by Donna Schulz) 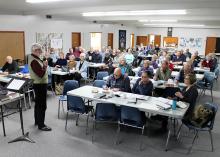 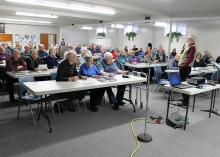 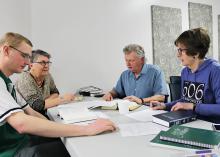 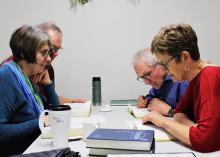 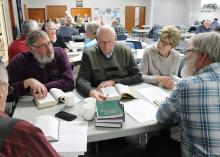 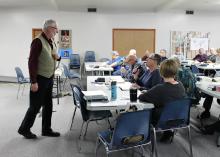 Julie Handel, at right holding the microphone, asks a question of Gerald Gerbrandt during his short course on Deuteronomy, held at Rosthern Mennonite. (Photo by Donna Schulz) 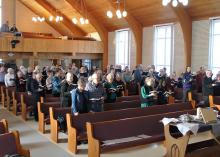 Worshippers from Aberdeen, Eigenheim, Rosthern, Tiefengrund and Zoar Mennonite churches gather at Rosthern Mennonite for worship on Feb. 9 as their weekend with Gerald Gerbrandt draws to a close. (Photo by Donna Schulz)