Mennonite Disaster Service has been very busy for about three weeks now (after the evacuation order was lifted). 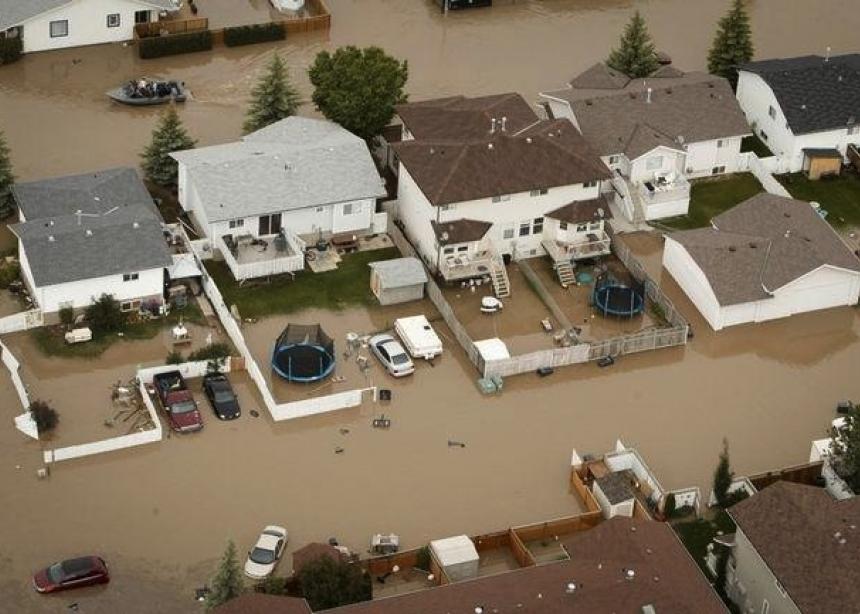 The house on the bottom right corner belongs to Erinne Wolfe, a member of Trinity Mennonite Church. She is scheduled to leave for Europe on Thursday but can’t get into her house to retrieve her passport. They tried to get through yesterday but weren’t successful, according to Rita Janzen.

Editor's Note:  With our Alberta correspondent, Donita Wiebe-Neufeld, on sabbatical, we asked Rita Janzen to give a first person account as an update to after-flood conditions in High River. This is her story.

So much has happened since the flood exactly one month ago.  I’m still driving a rental vehicle although we did hear from the insurance company as to what they will be reimbursing us for the loss of our car.

Our department (Protective Services, M.D. of Foothills) is still working out of the Heritage Pointe Fire Hall and will be for quite some time.  The rest of the employees are working from an unused office building in Aldersyde generously offered by Mullen Trucking.  Everything is working out.  The M.D. building is being restored but it will likely take another two months.

There is a work camp established by Service Master which houses approximately 200 workers.  They’re the ones who are dealing with the commercial and industrial buildings.  The provincial government has established temporary housing for residents who won’t be able to get into their homes for quite some time.  “Saddlebrook” will house about 1200 people and is located about 10 kilometers north of the Town of High River.

Mennonite Disaster Service has been very busy for about three weeks now (after the evacuation order was lifted).  The first week Jim Dyck, Alberta MDS Director, arrived to get the ball rolling and most of the help came from locals.  Last week we had Gerald and Lee Dyck from British Columbia staying at our place.  Gerald is the MDS Director in BC and has had considerable experience in organizing the crews.

Glen Williamson (someone who has never worked with MDS but wanted to help in some way) has volunteered as project manager. MDS set up a site on the rodeo grounds on the north edge of the Town of High River and has seen lots of volunteers participate.  Gerald actually sent a report to us of his work here but that’s at home.  I’ll send it to you when I get home.  This week Ron Bushman from Saskatoon is helping Glen with organizing the work and crew.

The ‘clean up’ is starting to slow down mainly because the houses that are left are in such horrible condition that the insurance companies and OH&S may not let anybody in (mould, unsafe foundations, etc.).  People are trying hard not to let the state of the town affect their hope but the town really does not look anything like the quaint and charming place it once was.  Many businesses are unsure whether they will try to rebuild.  Residents are trying to be patient with regaining their sense of normalcy but it’s hard when not all the services are available.

Our daughter and her family live in a rented townhouse and were able to move back in on June 29 but they still don’t have a hot water tank.  The wonderful thing about all of this is that God’s hand is evident everywhere.  Gerald and Lee have some extremely interesting stories to share about their week here.

Rita Janzen is a part time administrative assistant for protective services (police, fire) in High River, and a member of Trinity Mennonite Church.

The house on the bottom right corner belongs to Erinne Wolfe, a member of Trinity Mennonite Church. She is scheduled to leave for Europe on Thursday but can’t get into her house to retrieve her passport. They tried to get through yesterday but weren’t successful, according to Rita Janzen.

We are past helping out physically, but I guess we have been wondering, 'where is MDS in response to this tragedy?'

Please go to the link found in the article and be advised that MDS is responding.