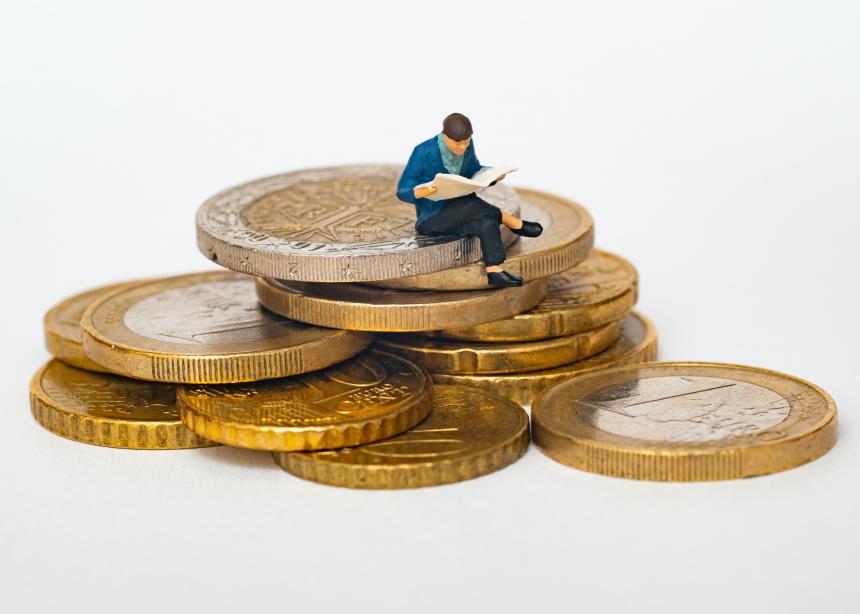 “Who says they have enough money? We’ve never heard such a thing!” blurted the students at a Christian college at which I used to teach. I had just told them that I was going on an international human-rights delegation. After asking about funding, they vocalized their surprise that I was paying my own expenses. “I have enough money,” I had said.

Clearly, if these students had encountered ideas of simple living or living “more with less,” those notions had had little impact so far. They are decidedly countercultural ideas in our society. Even in parts of Christian religiosity, prosperity is associated with divine blessing. I don’t mean the crassness of the exorbitant; the Bible has plenty of truth-telling about the rich. What about every-day people who earn “average” incomes?

High on my all-time best things ever read was an article entitled “Whatever Happened to ‘Living Simply’?” published in Canadian Mennonite back in its Nov. 28, 2005 issue. Among the benefits Esther Epp-Tiessen listed are that living simply is an act of discipleship and a witness to higher values, as well as encouraging generosity, demonstrating alternatives and fostering sustainability. We need a concept of “enough” or we never have enough.

Loads of research shows that after achieving a level of income sufficient to meet reasonable needs in one’s society, increases in income do not lead to increases in happiness. Even more thoroughly researched is the link between low levels of income inequality and stronger, healthier, more stable and happier communities.

A now-defunct website called the “Global Richlist” was another influence on me. It allowed people to input their country and income, then drew on credible databases to place them among the range of incomes for the population of the entire world. Astonishingly, only about 25 million people of the world’s 7.7 billion earned more than I did. I was in the top half of the top 1 percent of the world’s population. Zoinks!

That was with an income less than the median income of Alberta. While I lived in the richest province in Canada, the facts are that nearly all of us are the global elite. That’s why thinking about money is crucial.

Epp-Tiessen adds another benefit to living simply. It invites discernment. It forces decisions, judgments even, about how best to live to create shalom in the entire community of humanity and creation.

Living simply is not easy, even if it is a deliberate choice, and poverty is not a choice. Living simply requires carefulness, self-control, and attention to budgets and life’s details. It can have extra stress. It does not solve problems of global structures.

Still, it may allow us to be better agents or recipients of God’s blessings. Some years ago, Mennonite Central Committee Alberta needed a billet for one of the main speakers at its annual general meeting, a Christian journalist from Lebanon. I was nervous to do so because my kids and I were renting a two-bedroom suite on one floor of a house. I gave him my bedroom. It was so small that he had to crawl under the desk to get to the bed. That was embarrassing. But why?

After our time together, he said he had gained an entirely new perspective on Canadians, that even a university teacher would—had to—live in such a way showed him another side of Canada. We talked deeply about the important question of how much—or what—was enough. I think both of us were blessed.

Randolph Haluza-DeLay lives in Toronto, in a household of other adults exploring what it means to be “community” with each other.

Read more Mind and Soul columns:
Is it moral to bike?
Majority-world theology
Vaccination colonialism
What does UN ‘peace’ mean?
Don't be like Jonah

Perhaps the question should not be how much income is enough, but instead how much security is enough? In a world of inflation (or maybe deflation), retirement systems that transfer all the risk to the retiree and potential for massive disruption in the economy, no one can easily define ‘enough.’

Thanks for picking up this important thread of our tradition. A bit frayed perhaps, but still woven through history back to Jesus himself. I believe what is key today is presenting simplicity not as giving a whole lot up (though there is an element of that) but rather a stepping into a more connected, more fulfilling way of life. And for most of us, it cannot be done alone - we need a community to accompany us on this journey. Compulsive consumption attempts to fill a void left by the loss of culture and the omnipresence of capitalism but in the end leaves us empty. Slowly we can replace that compulsiveness with connection to each other, time in nature, more music, more reading, growing and preparing food, making art, prayer, meditation and all the other things in life that bring joy without exacting a price on ourselves or the planet. Shalom!

Randy beautifully draws our attention to a way of life marked by enough, sufficiency. Without discerning what is a 'need' and what is a 'want,' we will never have a sense of sufficiency, and thus no sense of abundance either! Thanks. I would add, we also need to work for reform of our socioeconomic system and structures, reforms and changes that invite people to discern enough, to detect true needs from never ending wants. Working for such systemic changes is also a holy calling for Christians.

A worthy subject! In my life time, I can honestly say I never went short on any basic financial need. When there seem to be none left for the future, somehow, the future took care of itself. My father in law thought me this philosophy: When you run out of money, check the money tree and you will manage well. So go on the humanitarian trip, give 10% to Charity, help a neighbour, you will have enough and you will be much richer as a result.