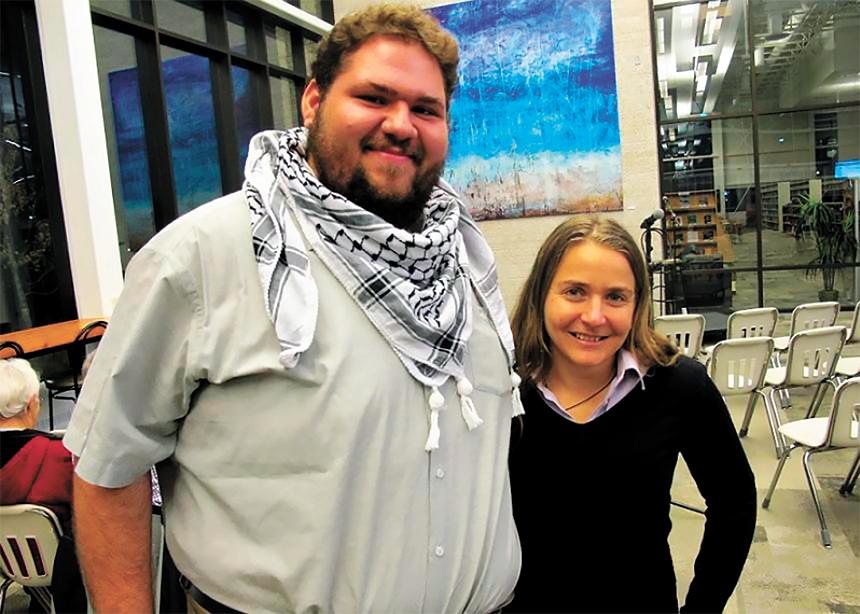 Peace activists, Sahar Vardi, right, a Jewish Israeli, and Tarek Al-Zoughbi, a Christian Palestinian, are pictured during their cross-Canada speaking tour in 2018 sponsored by MCC. They are also featured in ‘David and Goliath,’ an episode in MCC Ontario’s podcast, Undercurrents, which explores the history and current situation in Palestine and Israel. (File photo by Byron Rempel-Burkholder)

At its 2016 assembly, Mennonite Church Canada passed a resolution affirming nonviolent efforts of Palestinians and Israelis to overcome injustice in their region, and committing Canadian Mennonites to “deepen their understanding of Palestine-Israel relationships.”

In response to that resolution, the MC Eastern Canada Palestine-Israel Network (PIN) was formed to educate, build relationships and advocate for peace and justice. Similar groups across Canada connect to each other through the MC Canada PIN.

Ken Ogasawara, MCC Ontario’s communications content specialist, produces Undercurrents. He is also a member of MC Eastern Canada’s PIN. In this episode he explores the history and current situation in Palestine and Israel.

He begins with a “thought experiment,” inviting listeners to imagine their reactions if Manitobans invaded and occupied Saskatchewan. He says that what would seem ridiculous here in Canada is reality for Palestinians today living under Israeli occupation.

Ogasawara describes how the State of Israel was created, displacing 750,000 Palestinians. He also explains how a 1948 United Nations resolution giving Palestinians the right to live in peace and return to their homes was never honoured. Israel also remains “in blatant violation” of the Geneva Conventions which set humanitarian standards during conflicts, he says

Ogasawara cites Christian Zionism as the reason why the State of Israel has not been held accountable for these violations. Zionism is a movement to establish and protect a Jewish homeland. For Christian evangelicals, supporting Zionism “serves as a form of repentance” for western Christianity’s anti-Judaism over the centuries, and is seen as “an essential step on the way to Jesus’ second coming” by dispensationalists, according to Ogasawara. Their fervour doesn’t leave room for considering the consequences for Palestinians.

The United States has vetoed 44 UN motions critical of the State of Israel has provided billions in foreign aid to Israel, mostly in the form of military assistance, making Israel one of the “most well armed nations on earth,” Ogasawara said.

In the podcast, David Chow, a pastor and member of MCC Canada board of directors, describes how he was raised to support Zionism, but he says that, after a learning trip to the region, where he was hosted by a Palestinian family, it was like “scales falling off my eyes.” His stereotypes about Palestinians were challenged, he says, and he found himself repenting and praying for forgiveness. He says he began to see how unconditional support for Israel contributes to the suffering of Palestinians.

Ogasawara sees value in amplifying voices of those who are oppressed, and telling stories of peacemaking that are rarely heard. MCC works in partnership with peace groups on both sides.

He says he made the podcast after meeting “an unlikely pair” of peace activists from different sides of the divide. In 2018, MCC invited two of its peace partners in the region to share in a cross-country speaking tour. Sahar Vardi, a Jewish Israeli from Jerusalem, actively protests her country’s occupation of Palestinian territories and was imprisoned for refusing mandatory military duty. Tarek Al-Zoughbi, a Christian Palestinian who works with Wi’am, a Palestinian Conflict Transformation Center in Bethlehem, trains youth in peace and reconciliation.

Vardi describes how quickly the “normalization of violence” happens for Israelis who are taught to believe that everyone is trying to kill them, and that the only solution is a strong military.

Al-Zoughbi explains some of the impact on families and communities when Palestinian children are rounded up and imprisoned by Israeli Defence Forces. The State of Israel prosecutes 500 to 700 children each year in military courts, where there is a 99 percent conviction rate, he says.

These activists say, “The enemy is not the individual on the other side of the wall; it is the systematic implementation of a policy of fear that makes peaceful coexistence impossible.”

Ogasawara asks, “What if David and Goliath ‘chose to be neighbours,’ sharing the land and water?” It is the wish of many today who are weary of the fear and the violence, he says.

Vardi adds, “We don’t want coexistence, we want co-resistance,” to build something new together.

Amy Zavitz, facilitator and PIN member, encouraged participants to “sit in the tension” between living under the legacy of colonialism in Canada while opposing Israeli occupation of Palestine.

Several participants noted that Mennonites also need to come to terms with their own anti-Semitism.

Some next steps included more education and book studies, partnerships with other peace groups in Canada; and encouraging the Canadian government to help get COVID-19 vaccines to Palestine, to take independent stands on Israel at the UN, and support the movement to boycott, divest and sanction Israel economically.

To listen to Undercurrents, which is supported by a charitable fund from Kindred Credit Union, visit bit.ly/3gnQfKI. 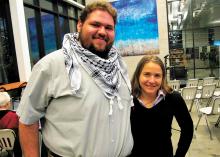 Peace activists, Sahar Vardi, right, a Jewish Israeli, and Tarek Al-Zoughbi, a Christian Palestinian, are pictured during their cross-Canada speaking tour in 2018 sponsored by MCC. They are also featured in ‘David and Goliath,’ an episode in MCC Ontario’s podcast, Undercurrents, which explores the history and current situation in Palestine and Israel. (File photo by Byron Rempel-Burkholder)

Thanks for this article on a creative and thought-provoking podcast. I invite readers who are interested in following Mennonite Church Canada's ongoing follow-up to the 2016 resolution on Palestine and Israel to visit its page at https://www.mennonitechurch.ca/pin, note your regional working group and make contact with them, and sign up for the monthly Update newsletter. Continue to pray and work for a Holy Land where all--Jews, Christians, and Muslim--are equal in freedom, human rights, and dignity.