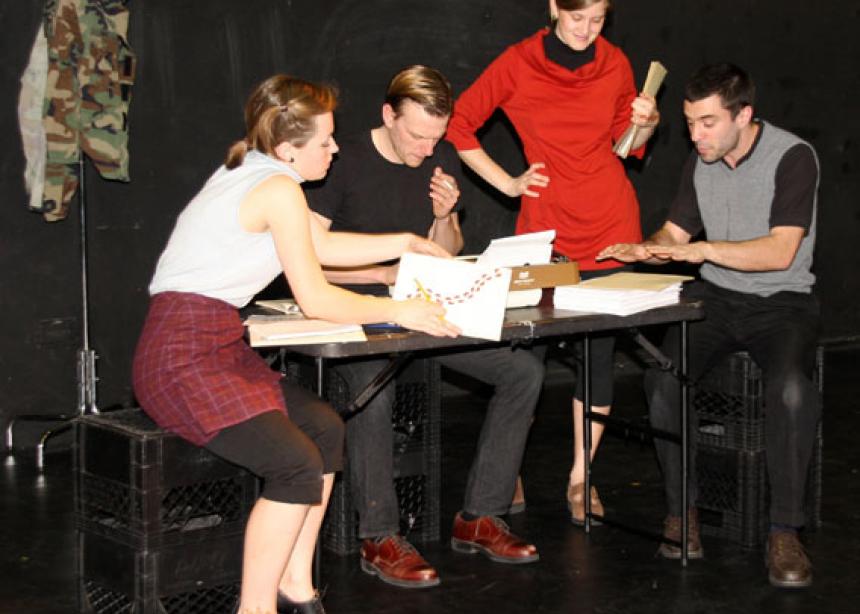 2. a person who persistently annoys or provokes others with criticism, schemes, ideas, demands, requests, etc.

3. Theatre of the Beat’s play about Sam Steiner, long-time librarian and archivist at Conrad Grebel University College, Waterloo, Ont., describing his move to Canada as a draft dodger during the United States’ involvement in the Vietnam War.

The idea for the play about Sam’s move to Canada came from Fred Martin, Grebel’s development director. He approached Rebecca Steiner (no relation to Sam), a drama student at the University of Waterloo, specifying that period music, in particular that of The Flying Burrito Brothers, a folk-rock band from the 1960s and ’70s, be used. According to Martin, “My Uncle” and other Gram Parsons’ songs “are a soundtrack for Sam’s life.”

“It’s based on a true story, but it’s not biography,” Sam says of the play. “It’s really their project. I lent my name and parts of my story.”

The three sold-out performances on April 20 (44 years to the day since Sam refused the draft) and the following day were examples of great acting and music, and a story that has a message for Mennonites and others in the present. The play unfolds with minimalist staging. The music, costumes, accents and character representations move the play along quickly, together with audio-visual effects.

Beginning with Sam leaving for Goshen (Ind.) College just before the Vietnam War, the play paints him in rebellion against his Mennonite roots in many ways. The cigarette hanging from his mouth through most of the play symbolizes his chosen position outside the church community. It is not until he sees Martin Luther King march through Selma, Ala., that he is converted spiritually and politically.

But his rough edges keep him in hot water at Goshen. In the play, his writing in a student paper, MennoPause, gets him expelled from school, thereby losing his student exemption from the draft. Rather than plead a Mennonite religious exemption, he goes underground, eventually being spirited across the border to Canada.

But before Canadian Mennonites can feel morally superior to Americans, Sam meets up with bigoted and prejudiced Canadians while working in a local Kitchener-Waterloo grocery store.

The playwright has created a piece that moves Sam’s 1960s’ American political conversion into confrontation with 2010’s Canadian comfort. Sam says the grocery store incident isn’t historical, but does paint a picture of some of the responses he received. There are questions about what his behaviour would do to the conscientious objector status negotiated in Canada, and musings by some survivors of communist Russia as to his stance regarding communist Vietnam.

While it was performed several times in Winnipeg at Canadian Mennonite University’s Peace-It-Together conference, the April 20 show was the first time that Sam and his wife had seen it, although they had read through the text while it was being workshopped.

Both Sam and Sue enjoyed the play, with Sam visibly moved by some sections, in particular, when his character makes the decision to leave for Canada. Sam has hopes that the telling of his story will inspire further generations to work for peace and justice.

The five twenty-somethings who make up Theatre of the Beat certainly have been. 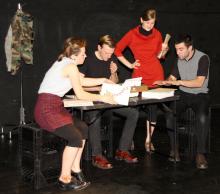 My memory is of both Sam and Sue in our living room in Waterloo (with my father J.W Fretz) just days after they left the states. It felt a bit like being part of an underground railroad...they were still in a state of shock, but both Sam and Sue's convictions were genuine and deep. It is indeed redeeming to see this play being performed, for Sam's personal journey and for the many others who have to leave their countries of origin for political/cultural reasons.

I liked the many issues raised in the performance at Winnipeg, in the Home Street Mennonite Church. The setting was good but the accoustics made for a partial hearing, pun intended.
1. where can i get to read the story of Sam Steiner as written by Melissa Miller.
2. Are there other issues that are discussed or hinted at in the Gadfly?
Where can I get more information about this particular story and series of events.