In a perfect storm 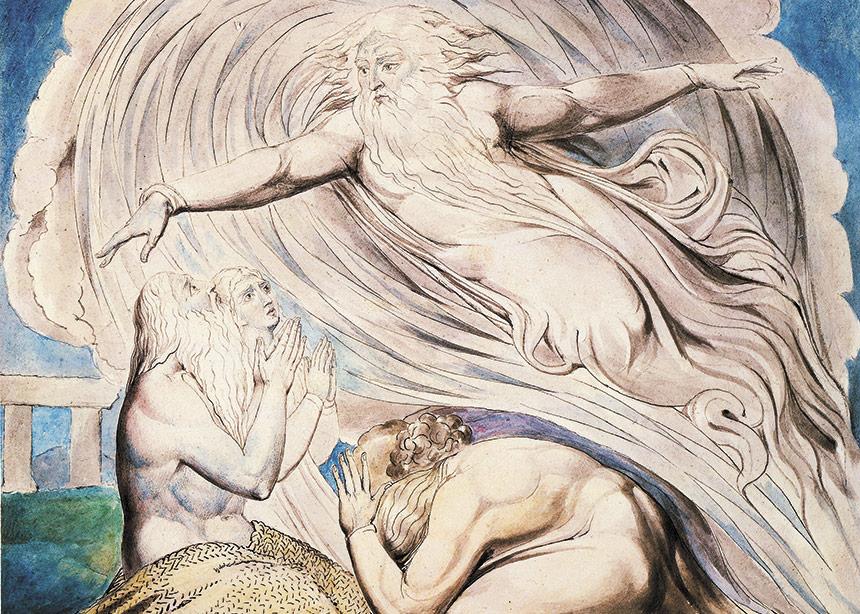 ‘The Lord Answering Job Out of the Whirlwind,’ part of a series of paintings on the Book of Job by William Blake, 1805-06, commissioned by Thomas Butts. (Public Domain)

Years ago, I saw a movie about a fishing crew caught at sea when two storms and a hurricane converged to create a “perfect storm.” I have been reminded of this as widespread protest after the death of yet another African-American man in the custody of white police officers crashed into an already devastating novel-coronavirus pandemic and economic crisis. While the medical and economic crises seem unprecedented, racial injustice has brewed for centuries, and the combination has been devastating.

The pandemic has raised age-old questions:

And in the case of racism and policing, we now face dueling perspectives: Appeals to “law and order” seek to maintain the status quo, with some tinkering at the edges, while voices of protest scream that profound change is needed.

As communities moved into the era of physical distancing, I had begun to reread the Book of Job. As protests erupted on top of everything else, I was struck by how relevant its basic dynamic remains.

Job begins as a wealthy, well-respected, diligently religious man. In wave after wave of suffering, he loses possessions to marauders (economic collapse), all of his children die (trauma), and finally he becomes sick (disease). Job sits in anguish, and friends come in order to “comfort” him.

Although this story is often depicted as a theodicy that puzzles over God’s link with suffering, the narrator and all of the characters, including Job himself, see some form of connection between God and suffering. The central question here does not appear to be, “Is God related to suffering?” but rather, “How should Job respond?”

From the beginning, speech is central. Even after enormous suffering, Job “does not charge God with wrongdoing” (1:22) and “does not sin with his lips” (2:10). Finally, Job emerges with a heart-wrenching speech, wishing he had never been born—or even conceived! Startled, the friends go on the attack to defend God, citing traditional theology to explain his plight. Since God is just, you must have done something wrong. Perhaps God is teaching you a lesson.

But Job will have none of it. He voices his exasperation—with his situation, his friends and his God—becoming increasingly frustrated and angry. He even calls on God to show up and explain what’s going on. This debate rages for more than 30 chapters—traditional theology meets existential crisis.

In our present moment, this debate sounds quite familiar. Is COVID-19 a form of divine punishment for sin? If not, why would a loving God allow it? Does this pandemic prove that God is not in control?

After the killing of Floyd, what is an appropriate way to get people’s attention? Are protest and anger disruptive, even sinful, especially during a pandemic? Or are they okay, perhaps necessary? If Floyd’s killing is the spark that lit the flame, it’s clear there’s a lot of accumulated tinder all around.

In this moment, whose voices—and lives—matter? Can lived experience legitimately challenge inherited tradition?

A while back, I taught a course on Job. I had a number of bright, young engineering and computer science students who were clear, structured thinkers. They read Job as an intellectual puzzle to be solved. What doctrine answers this dilemma? How do we square God’s omnipotence and goodness with the presence of evil and suffering in the world?

In the same class, there was a mature student who had been a high-flying executive in a prestigious national company. He was living the high life, complete with horses in an equestrian stable and a yacht in Florida, before he suffered a severe car accident resulting in a brain injury. Having fallen off the social ladder, he was reinventing himself, training to become a social-support worker to help those in need. Eager and engaged, he still had trouble articulating himself and would often lose his train of thought.

As the course proceeded, it was like living in a parable, with the class mirroring the dynamic of the book. I saw Job’s friends draw on traditional views to explain his suffering, insisting on logical coherence and predictable consequences, largely oblivious to the existential angst embodied beside them. I spent a whole term encouraging students focused on correct, universal doctrine to also attend to lived experience—and their classmate!—but with little success.

Job and the ‘perfect storm’ of COVID-19

Remarkably, God actually does respond to Job (chapters 38-41), although without giving Job an answer. While Job thinks that the universe should be fair and he demands an explanation for why all of this happened to him, God responds by moving from Job’s microscopic focus to a broad-angle lens describing God’s care for all of creation. Perhaps most intriguing—and disturbing—the Behemoth appears as the “first of the great acts of God” (40:19).

Biblical creation is often described as God bringing order out of chaos, but this symbol of power reflects a wildness bordering on chaos and destruction that forms part of God’s creation, instead of being separate from it.

For me, this has provided a helpful way to think about a hurricane or virus. While insurance companies still speak of “acts of God,” natural disasters are not signs of a punishment that God micro-manages, on the one hand, or evils that God fails to control, on the other, but rather they reflect the wildness built into creation.

Job 38-41 provides a helpful antidote to a runaway human-centred perspective in which Christians have justified environmental destruction by appealing to God’s command to “have dominion” (Genesis 1:26). Beyond the current crises, this reorientation holds significant potential for re-thinking our role in the ongoing climate emergency, placing ourselves within creation rather than above it.

In our time, we should also reconsider how we understand the climax of Job’s response to God: “Therefore I despise myself, and repent in dust and ashes” (Job 42:6). In the King James Version, “despise” appears in italics, and the word “myself” is added in translation, although it is not present in the original text. While many versions clarify this ambiguity, the original phrase does not actually specify what Job despises or rejects: Himself? His “case” against God? His former perspective?

Even more significant, the English word “repent” suggests that Job admits wrongdoing. In a common reading, Job admits that he sinned by speaking up, repents and then receives double what he lost—a nice tidy perspective that keeps intact the doctrine of retribution, with God as Santa Claus doling out rewards and punishments.

However, the Hebrew word translated as “repent” here has multiple meanings. Remember how the friends came in order to “comfort” Job (Job 2:11)? This is the same term. The same phrase as in Job 42:6 also appears in Exodus 32:14, when God concedes to Moses lobbying for the Israelites, and in Jonah 3:10, when God responds to the repentance of the Ninevites. In both cases God “relents” or “changes his mind” about punishing them.

So Job could be saying “I am comforted” or “I change my mind.” In fact, since this term is never used in the sense of “repent” elsewhere in the book, this seems the least likely translation.

Far from condemning Job’s words, God chastises the friends: “For you have not spoken of me rightly as my servant Job has” (42:7-8). In the end, it wasn’t the systematic theologians trying to defend God who were in the right, but the one who got frustrated and angry. While Job’s friends collapsed God into their conception of the divine, only Job spoke to, and sought a relationship with, God. The sin did not lie in Job’s lament after all, but in his friends’ certainty about their erroneous positions!

At present, I feel like one of Job’s friends. A Bible scholar passionate about the church, I am deeply invested in the received tradition. But as protesters clamour for change, I need to check an instinct to be defensive in order to listen to experiences far removed from my own.

In doing so, I should also recognize that systemic racism has long been justified with the Bible I hold dear. Far from aberrations, slavery, the Doctrine of Discovery, and Indian Residential Schools reflect our tradition’s historic complicity in structural sin. Rather than defending Christianity, on one hand, or jettisoning it, on the other, to participate in this living tradition means critiquing where it has gone astray and then seeking new understandings for moving forward.

Unlike Job, who enjoyed a privileged social and economic status, in our day systemic marginalization has produced disproportionate negative effects on those of lower economic means. While COVID-19 is not a judgment for sin, the structural sin of racism has amplified its tragic effects.

So let’s not get turned off by anger, as Job’s friends did, or focus on others’ individual sins while ignoring our own complicity in structural ones. This is a moment for our perspectives to be challenged and our minds changed.

It is not easy making sense of experiences that defy prevailing logic. But as the Bible repeatedly demonstrates, at times the explanatory power of a former perspective just doesn’t cut it in different circumstances. We can recall the words of Jesus, who also suffered under systemic oppression: “Every scribe trained for the kingdom of heaven is like the master of a household who brings out of his treasure what is new and what is old” (Matthew 13:52).

There is treasure to be found, but it does take some digging . . .

Derek Suderman is associate professor of religious studies and theological studies at Conrad Grebel University College and the University of Waterloo, Ont.

1. During this coronavirus pandemic and economic crisis, what suffering have you seen in others and in yourself? Is this suffering catastrophic enough to be compared to Job’s? Why have concerns about racism and policing, which have been brewing for many years, erupted at this time? What fundamental changes is our society experiencing?

2. Derek Suderman says that the pandemic has raised age-old questions. Do you sometimes wonder whether God has a purpose in bringing COVID-19? Does it make you question God’s omnipotence or goodness? How does God respond to Job’s questions in the end?

3. Natural disasters “are not signs of punishment,” writes Suderman. They are not “evils that God fails to control,” rather, “they reflect the wildness built into creation.” Do you agree? What other questions arise from this explanation?

4. Suderman concludes that “[t]he sin did not lie in Job’s lament after all, but in his friends’ certainty about their erroneous positions!” What are the limits of systematic theology? Why does uncertainty make us feel uneasy? 5. What injustices has the pandemic exposed in Canada? What are some steps we can take to expand justice for all? 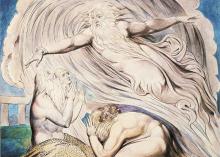 ‘The Lord Answering Job Out of the Whirlwind,’ part of a series of paintings on the Book of Job by William Blake, 1805-06, commissioned by Thomas Butts. (Public Domain) 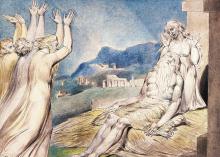 ‘Job’s Comforters’ turn into his accusers. Watercolour paintings were created by William Blake in 1805-06 for a series on the Book of Job commissioned by Thomas Butts. (Public Domain) 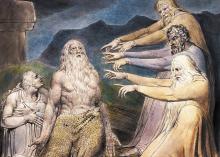 ‘Job Rebuked by his Friends.' Watercolour paintings were created by William Blake in 1805-06 for a series on the Book of Job commissioned by Thomas Butts. (Public Domain)

Thanks, Derek, for this excellent thought-provoking article. Our congregation is using it in a four-part series on Job and suffering.