Cheering for the Leafs!

Caring for creation in practical ways 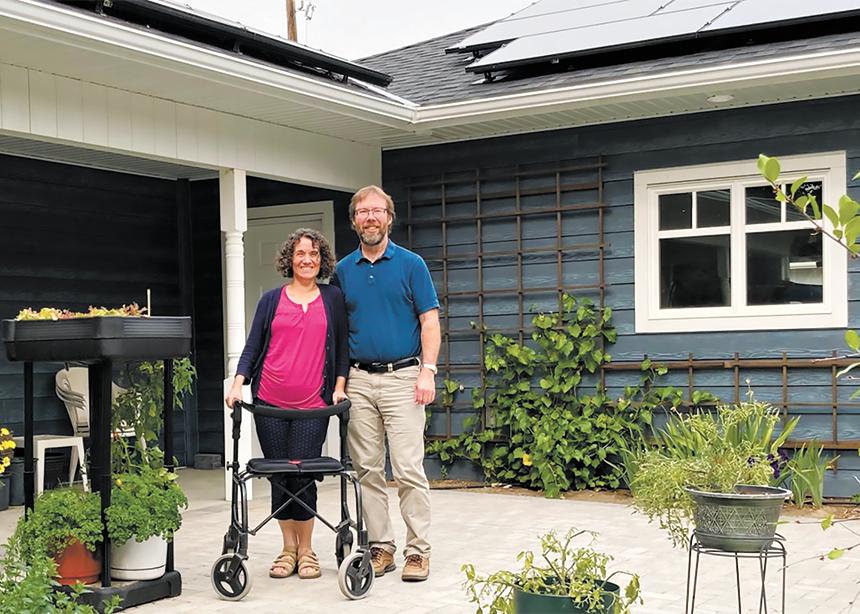 Being a Leaf fan is not always well received, especially in Alberta, where oil and gas are king. Tim says he gets the finger on a regular basis while driving around the city. On one occasion he came out of a building and couldn’t get into the driver’s side of his car because a big jacked-up pickup had blocked him in. They were the only two vehicles in the parking lot. Coincidence?

Brenda Tiessen-Wiens, Mennonite Church Alberta’s moderator, and her husband, Trevor Wiens, drive a Chevy Volt. The Volt is a plug-in hybrid. Wiens has been in the oil and gas industry for most of his career. He recognizes that the industry has a large footprint but says that, in his experience, “Environmental impacts were always a high priority. Emission monitoring and reduction were a daily discussion and task. . . . I don’t think the phrase ‘environmental impact’ is heard as much in any other industry.”

He says they have received no pushback in Alberta for driving the Volt. Brenda says it’s the first car she has ever loved.

So why are Mennonites buying electric and hybrid cars?

Wiens says they chose the Volt because they “wanted an environmentally friendly car that addressed the problem of range anxiety.” They often drive it to Manitoba.

Wiebe-Neufeld says the electric car made sense from both economic and faith perspectives. On the economic side, there is a long-range financial benefit—he calculates that they save $5 for every 100 kilometres in the road. With regards to faithful discipleship, he says, “We have a calling to care for the Earth as God would care for it.” He says that reducing the use of fossil fuels is key in caring for the planet and its people. Other benefits include no oil changes, no transmission flushes and no waiting in line at the gas station. And it is fun to drive!

Buying electric or hybrid cars is only one way Albertan families are expressing their care for the planet, and therefore for the vulnerable people who are affected globally by climate change.

Every year the Wiebe-Neufeld family tries to implement a new environmentally friendly practice. These practices have included upgrading the insulation in their walls, installing an on-demand water tank that only heats up water as needed, replacing their gas furnace with a high-efficiency one, and installing solar panels with the help of grants from the city and province.

Marie Moyer and husband Dave Neufeldt of Lethbridge Mennonite Church built their net-zero home through a contractor who specialized in environmentally friendly construction practices and energy-efficient homes. Marie needed a home that was wheelchair-accessible, so it seemed more practical to start from scratch. They used recycled building materials and good insulation, installed solar panels, and heat their home with geothermal energy.

Solar panels can be expensive, so the couple were excited when Moyer’s sister, Joanne Moyer, offered to invest. Joanne lived in an apartment and was unable to make the changes she wanted in her own housing, so she helped pay for the panels and, in return, she receives dividends from the calculated savings each year.

Another factor in building the house was location. To avoid using their Volt vehicle, the Moyers built their home within biking distance of Dave’s work and, on a nice day, within wheeling distance of Marie’s work.

Marie talks about the two main driving forces behind her passion for creation care. “First of all, God has created a beautiful, rich and diverse world for us to live in,” she says. “To show gratitude towards the Giver means to take good care of the gift. Second, the climate chaos we are currently experiencing is disproportionately affecting people in poorer countries. . . . How can I claim to love my neighbours if I don’t care about how my choices contribute to their suffering?”

Many environmentalists see the world as on fire, stating that people have waited too long and need to focus on changing structures, not on recycling and consumption. But Wiebe-Neufeld, who just completed his master’s degree in environment and business from the University of Waterloo, Ont., says that people can also change the trajectory by not only focusing on small token acts but by exponentially increasing substantial changes. 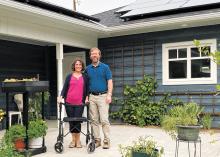 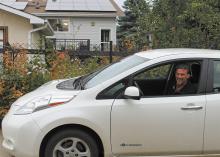 great article. could we think about how to do this with our church structures? I am on a strata council and we are wondering how to make this work economically for the 48 units in the strata that has great southern exposure. We already have an idea in place to lower every unit's heat loss through better window technology (about 24-32 dollars per month) and siding that needs to be replaced.

Thanks, Walter, for your comment about church structures. Earlier this year Mennonite Church Canada's Joint Council established a Sustainability Leadership Group to help care for creation in practical ways. The Group is looking at MC Canada's own activities, as well as how to engage with congregations and partners in addressing sustainability together. We hope these efforts lead to good discernment that will help us live out our calling to care for creation.

This is a great article, but I need to correct something I said. If I gave the impression I get the finger on a regular basis while driving our Leaf around Edmonton, I misspoke. While electric vehicles do get some negative reactions and a big pick-up did box me in as described, the response we have received has been overwhelmingly positive. Anyone I have actually spoken with has been genuinely curious and intrigued. It’s been great to share how much we enjoy our Leaf. Echoing Brenda in the article, it’s the most enjoyable vehicle we have ever owned!

We'd like to echo Tim's comment about the responses we've gotten to our home here in Lethbridge. It's been really positive - often curious, and just as often outright encouraging and supportive. Our neighbourhood is very economically, ethnically and politically diverse. Having this strange home-building project interrupt the tranquility of our little one way street with big geo-thermal drilling rigs and all brought a lot of our future neighbours over to see what was happening. They were warm and welcoming and actually we met more of them that way than had we simply moved into a ready-made house. Even a local conservative politician once asked me about our building project and responded with enthusiasm. So I think there's a lot more nuance about what interests Albertans than stereotypes would suggest. Like so much of our discourse these days, what shows up in the public sphere is utterly polarized - oil versus the environment, for example - and doesn't reflect all the common ground we find in chatting on our front walks.