Local Mennonite pastor Pieter Niemeyer is frustrated with the MP's “mixed messages” though, and sees the outcome as “a gradual, but steady militarization of Canadian culture in the last decade.” 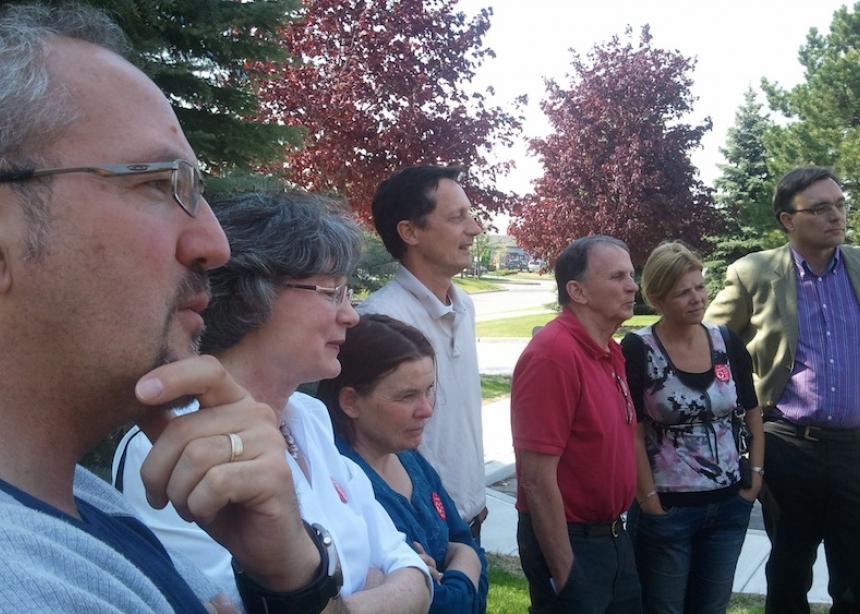 A task force was asked by the town council here Tuesday, May 15, 2012, to look into a proposal by the area’s peace churches to select a site and erect a plaque in honour of the founders’ conscientious objection to the War of 1812.

The recognition of “peaceful Canadians” will not be finished in time, though, for an upcoming parade on June 16 that celebrates the so-called military heritage of Stouffville, so named after a Mennonite, Abraham Stouffer, who in 1805 along with 55 other families, was seeking religious freedom and refusing to “take up the bayonet and rifle” on religious grounds.

An organized effort by the local historic peace churches made up of several Mennonite and Brethren-in-Christ churches to, in organizer and spokesperson Arnold Neufeldt-Fast words “address this significant distortion and re-writing of our town’s earliest history,” has failed to bring its perspective into Freedom of the City military commemoration planned by Member of Parliament Paul Calandra on short notice and virtually rubber-stamped by the town council.

Town mayor Wayne Emmerson told Canadian Mennonite that the council couldn’t move fast enough to incorporate any of the pacifist history into the June 16 celebrations, but instead a three-component task force comprised of the local Heritage Committee, the local museum staff and a contingent of the Mennonites, would look into a site—probably the existing Memorial Park—and work with the group on the wording of a plaque. “It could take a year, perhaps two years, to process it through the appropriate invested parties,” he said, “and come to a consensus on the text of the plaque.”

Not all of the town councillors, who voted in an earlier meeting 4 to 2 to okay the military celebration, were happy with the decision. Councillor Susanne Hilton, one of the two opposed, was frustrated that Mr. Calandra had sprung this proposal on the town at such late notice (April 27)--no staff reports on cost, availability of venues, staff time available for Council to review. “There was no consultation with the Mennonites,” she said. “It reflected an ignorance of the community’s history and was thus divisive for the Town.”

But, in an interview with Canadian Mennonite after Tuesday’s meeting, MP Calandra essentially blamed the peace church protestors for dividing the town over the issue, saying it was “only two or three individuals” who were pushing back. When reminded that this was an organized effort of several churches, he cited one unnamed peace church which distanced itself from the protest.

He said further he could, “in no way,” assist in the funding of a plaque for the town that is currently being jointly planned by Mennonite Central Committee Ontario and the Mennonite/Brethren in Christ/Quaker-Friends churches. The funding proposal was made to the town council that a special site and plaque be a part of the 1812 commemoration events in Stouffville. Calandra is the parliamentary secretary to the Minister of Canadian Heritage which is planning 1812 commemoration events.

Mr. Calandra had said earlier he was “surprised” that some 50 people turned out to oppose his proposition, according to a story in the Globe and Mail—a story that has triggered more than 300 comments from persons all over the province and Canada. “I think we cannot only honour and respect the sacrifices and successes of our armed forces of today, but we can also, separately, honour and help people who founded the town,” Calandra told the newspaper.

Other non-Mennonite community leaders are also weighing in. Cathy Molloy, director of nearby Markham Museum, who earlier objected to a request for her town to do a similar commemoration, said: “I read about the Stouffville controversy, and heard one of the CBC “As it Happens” interviews last week. “Interestingly, some were keen to have an 1812 celebration in Markham. Markham also has a pacifist history, even Button’s Troop had no tangible link to 1812. It's too bad that someone recommended that the Governor General’s Honour Guard be connected to 1812 in Stouffville. Someone did not have the knowledge, or do the research, before going forward. The problem could have been avoided if Freedom of the City was kept to a strictly GGHG event and done with community input. From what I understand, only one pacifist community is a part of 1812 celebrations and only because that community offered food and shelter to soldiers who needed it.”

Pieter Niemeyer, pastor of the Rouge Valley Mennonite Church, who along with Pastor Steve Authier of the Heise Hill Brethren-in-Christ Church made the proposal, was also disappointed with the immediate outcome and says MP Calandra continues to give mixed messages. “On the one hand he insists that this is strictly an honour of the GGHG and has nothing to do with the War of 1812 , but then goes on to say there is an historical connection.”

Beyond a distortion of historical fact, he says, “this is a great discomfort in our community about what we see as a gradual, but steady militarization of Canadian culture in the last decade.” The military contribution of Stouffville is small compared to what the “peace Canadians” have given to the community, insists Neufeldt-Fast. It is not known for its long “military heritage,” as MP Calandra has projected, but rather it is the national headquarters of two large charitable , non-governmental aid and relief organizations, Emmanuel International (EI) and Christian Blind Mission (CBM).

And at its heart, he elaborated further, the mill site where Stouffville first began, “We have the Mennonite Central Committee (MCC) Care-and-Share Thrift Store. These efforts are a positive witness about the importance of building peace and reconciliation globally. “Funds raised provide food, blankets and other emergency supplies to people around the world, many of whom are starving and destitute as a direct result of warfare. It would be an affront to many in our community to have a parade actually celebrating and glorifying war!”

Mennonite Church Canada moderator Andrew Reesor-McDowell, also a resident of Stouffville, has written to the Governor General David Johnston, asking him to incorporate the pacifist history of the town into any speech-making and to moderate the celebrations so that the historic “peace” component is part of the commemoration.

Johnston, former president of the University of Waterloo and a neighbour to Mennonites in the Waterloo Region, has been sensitized to their strong belief in peace from his time in that area. “While the connection between the Horse Guard and the western areas of Markham (e.g., Buttonville) is accurate,” wrote Reesor-McDowell, “Stouffville’s earliest history, like Waterloo’s, is the history of Canada’s conscientious objectors. “We would like to request that you personally review the text of the speech that will be made on behalf of your office and on behalf of your horse guard. We trust that you will have an eye for historical accuracy and also for the appropriate tone and balance for a community whose roots are in the historic peace churches.”

Ironically, or maybe appropriately, Tuesday’s meeting was held on International Conscientious Objection Day, an occasion on which the Canadian Council of Churches had written to Canada’s Jason Kenney, Minister of Citizenship, Immigration Multiculturalism to “express his support for the American conscientious objectors to the war in Iraq who have sought refuge in Canada.”

And the Stouffville protest is an echo of the past, according to Historian Jonathan Seiling, chair of The 1812 Bicentennial Peace Committee bringing together the historic peace churches of the Niagara region to make their opposition heard in the noise of the national celebration of the historic event. Seiling finds “ample evidence of a loud, vocal and even civil disobedient resistance to participation in the War of 1812,” characterizing these actions as “daring, rugged and gutsy.” Anything but the “quiet in the land,” he says, some even dying in prison for objecting to paying the military tax.”

To foster awareness and conversation, several events are being planned throughout the year, along with the blog War Resistance in 1812. Hosted by Carol Penner, a pastor at the First Mennonite Church in Vineland, guest bloggers reflect on topics related to the War of 1812, like conscientious objection, women’s wartime history and the church’s relationship to government. The blog is found at warresistancein1812.blogspot.com.

In the Stouffville instance, however, says Neufeldt-Fast, this was not the case. Mennonites from the states of Pennsylvania, New York and Vermont in the U.S. were actually invited to this area by then Lt. Gov. John Graves Simcoe who was far more interested in acquiring desirable settlers with agricultural and community building skills than forcing them to become reluctant soldiers. Under the Militia Act of 1793, Simcoe exempted them from military service, he said.

I am truly enjoying my one-year "subscription" -- arranged for me apparently by your cousin Gerald Benner. The magazine is crisp and intelligent!

One slight question -- I don't think there were any Mennonites in Vermont when Governor Simcoe's invitation went out. If I'm wrong, I'd have some important corrections to make in our history.

Thanks for the good work!

To John Ruth:
The sentence in question needs a slight qualification; Dick asked me to proof the text and I missed this. Whitchurch-Stouffville's northern hamlets were settled largely by Quakers, one of the other historic peace churches. Some of these Quaker settlers came to our municipality area from Vermont. Thanks for pointing this out.
Thanks to Dick Benner and the _Canadian Mennonite_ for the interest and diligent research on our unfolding story in Stouffville. It's a "kairos" moment for our churches and their witness in town. Pray that it may be an appropriate, gospel-shaped response to what is coming upon on us June 16 (All "To remember is to work for peace" folks may join us at the front of the MCC Care and Share that morning).
-Arnold Neufeldt-Fast
PS: Next step-- bringing active pacifism alive with theatre. Stouffville's own Rebecca Steiner (playright and director) and her theatre company will present "Gadfly: Sam Steiner dodges the draft," on Friday, June 1 (see http://www.canadianmennonite.org/articles/draft-dodger-doxology ).

Thank you to Dick Benner for the excellent article on the events unfolding in the Town of Stouffville.
As a descendent of the original settlers and long time resident of Stouffville, I have been intrigued by the actions of our federal Member of Parliament and his bringing of this military event to our town. We are thankful for our very own 'gadfly', Arnold Neufeldt-Fast, who was astute enough to notice the item in an upcoming town council meeting agenda.
I would just like out point out one tiny error in the article: the Lt Gov of the time was John GRAVES Simcoe, not GROVES (no Mennonite connection!)