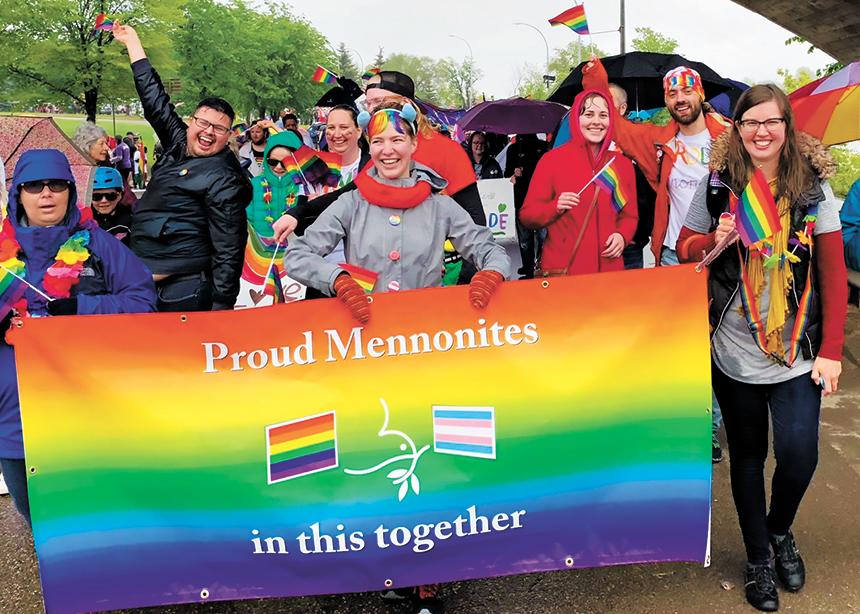 According to Susanne Guenther Loewen, co-pastor of Nutana Park Mennonite in Saskatoon, in previous years, “people from Wildwood, Osler and Nutana Park [Mennonite churches] were running into each other at the parade. Pastors from these three congregations got together and decided to register as a group and walk together this year.”

The parade, which was held on June 22, included about 45 individuals from these three congregations.

A week prior to the parade, those who wished to participate were invited to a “Prep for Pride” event at Nutana Park. About 30 people attended. The purpose of this event was “to raise awareness that we were walking, to decorate shirts and posters and make buttons, and to unveil our banner,” says Guenther Loewen. “We also shared rainbow-coloured snacks.”

Guenther Loewen and her colleagues—Joe Heikman of Wildwood; Eileen Klassen, an interim at Wildwood; Patrick Preheim of Nutana Park; and Patty Friesen and Nora Pederberg of Osler—had talked previously about why they wanted to participate. She says, “[We] agreed it was primarily about taking part in a wider celebration of diversity.”

Guenther Loewen says they chose the sentiment, “In this together,” to express this desire. These words appeared on the banner they carried as well as the buttons they fashioned during Prep for Pride. She points out that these buttons “were first made and distributed at the Mennonite Church Canada assembly several years ago in Saskatoon.”

So far, she hasn’t heard any feedback from other MC Saskatchewan congregations, either negative or positive. But, she says, “there has been a lot of positive feedback on social media, especially from Mennonites in other provinces, who have found our story inspiring.”

The weather wasn’t ideal for walking in a parade, but “those of us who walked certainly enjoyed ourselves, in spite of the rain,” she says. “We walked together and sang in four-part harmony about justice and freedom and ‘walking in the love of God.’ ”

She adds that participating in the Pride parade seems like a natural next step for her congregation, given that a number of years ago the church adopted a statement of inclusion that appears in its bulletins each Sunday: “Nutana Park Mennonite Church welcomes into fellowship and membership all persons who confess faith in Jesus Christ, without regard to their race, ethnic background, gender, age, sexual orientation, income, education, ability, and other factors that give rise to discrimination and marginalization.”

Wildwood Mennonite, likewise, has a similar statement of welcome that appears on the church’s website: “We’re glad to welcome everyone to worship and participate with us! Wildwood Mennonite Church is a community of followers of Jesus Christ that invites into membership all who wish to join us in the journey of faith. With God’s help, we will not discriminate in regard to race, ethnic background, age, gender identity, sexual orientation, income, education, ability and other factors that may give rise to division and marginalization.”

The pastors of the three churches did not make the decision to participate lightly and they did it in consultation with church members who are part of the LGBTQ+ community.

“Before making firm plans to participate in the parade,” Guenther Loewen says, “we made sure to consult with our LGBTQ+ members and congregants, to see whether they’d feel comfortable with it. They did, so we went ahead.” She adds, “The queer folks and family members and all of us who participated had a good time celebrating diversity, equality and love, and that’s what it was ultimately about.” 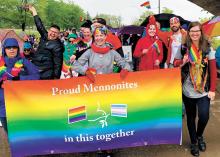 I would like to ask a question: Prior to this event, was any consideration given to James 4:6, which tells us that God resists the proud, but gives grace to the humble?