Resurrection hopes for a once-shared ministry

At 75, Voluntary Service seeks to bring Canadians back on board 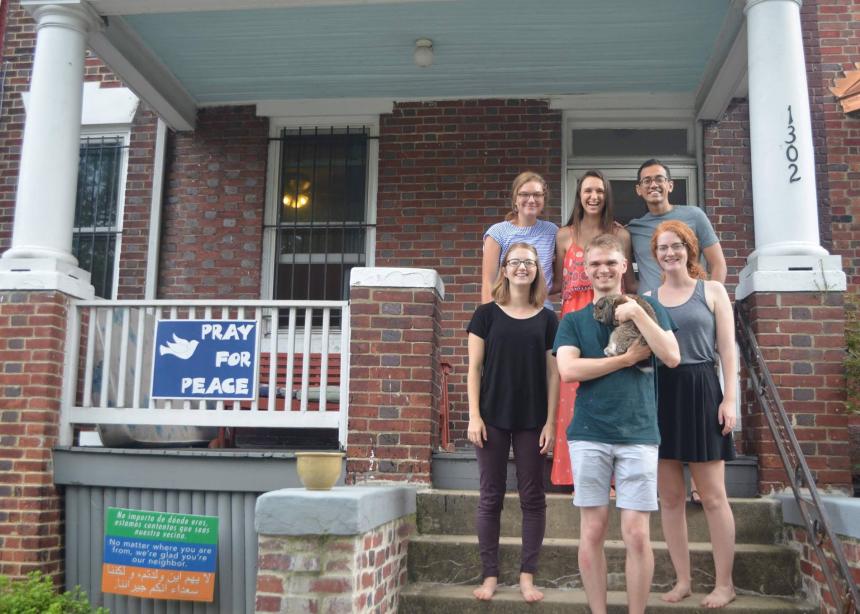 Kansas was not an exotic place to hold annual orientations for Mennonite Voluntary Service (MVS). Yet when MVS was a shared U.S.-Canada program, Brad Reimer and Miles Reimer, two of its leaders living on opposite sides of the 49th parallel, considered the gathering a highlight.

Miles, MVS’s director for the American side from 1996 through 2001, and Brad, associate director on the Canadian side during those same shared years, said that those orientations—and other joint gatherings in Canada—symbolized a rich and workable partnership in God’s mission.

“I absolutely loved crossing the border and having the Canadian team come to Camp Mennoscah,” Miles says. “There were so many gifts shared in those cross-cultural experiences. It was great to observe and reflect upon our differences and similarities. . . . When we got together, we shared a common passion, and in that there was very little difference between us.”

Brad says, “There were some bumps in the road . . . but overall, our partnership worked very, very well. . . . Half of the volunteers in our Canadian sites were Americans, and many of our Canadian young people served in U.S. cities such as Chicago, San Francisco and New York.”

This sent especially big shock waves through MVS. Five years before the denominational merger, the GC’s MVS program and the MC’s VS program had merged in anticipation of the future change.

“We started the discussion about a merger of our service programs back in 1993, when discussion regarding a denominational merger first started,” Miles says. “At the time, it seemed like a good decision, but then, after we split into two national churches, we had to divide our program again. . . . It was tumultuous, and there were a lot of losses in that process.”

These losses brought a dissolution of MVS in MC Canada.

“In less than two years after [MC] Canada was established, the VS program in Canada was eliminated because of budgetary reasons,” Brad says. “But those struggles weren’t just financial. We also lost communication and recruiting support from our former partner.”

The burden of shutting down all the units in 2003 fell to Brad, who says he experienced both communal and personal grief over this shuttering of the once-vibrant service program. “[MC] Canada’s schools and churches had relied on MVS to offer opportunities to our young adults for service,” he says. “With the demise of the program . . . many young Canadian Mennonites are not accessing opportunities to both serve and learn about themselves in the process.”

The losses triggered memories of the importance of his own MVS participation, he says: “I didn’t fit into church jargon, and MVS took me anyway and gave me the opportunity to serve and to be involved with a local congregation. MVS provided an option for people like me on the fringes to find a place to fit in.”

Despite the splintering almost two decades ago now, some hope is simmering for a renewed, though less formal, collaboration, says Del Hershberger, director of the Mennonite Mission Network (MMN) Christian Service department, which coordinates MVS and other service programs.

Here is why Hershberger is hopeful: This year, MVS is celebrating its 75th anniversary, a milestone made richer because of its former binational service program. The milestone commemorates how, even with all the myriad changes in its seven decades, MVS is still adapting and flexing.

He believes that MVS can again share the bounty of God’s gifted young people on both sides of the border. “We still have MVS participants from Canada,” he says. “We don’t do formal recruitment there, but we do encourage participants to recruit friends in organic ways through relationships.”

He says that MMN is currently in discussions with MC Canada about how MVS can share information in Canada about service and discipleship so that both churches and their young adults can mutually benefit.

“As we celebrate these 75 years, it is important to recognize that young adults from both Canada and U.S.A. put their faith into action and were formed by these service opportunities,” he says. “We cannot undo the past but, because of our rich, shared history and legacy, we hope to find a path once again to provide opportunities for more young adults to serve.”

This article gives the impression that MVS stopped in Canada in 2003 when Mennonite Church Canada ended its support for the program. In fact, individual congregations sponsored MVS units after MC Canada dropped the program.

In 2004 there were units in Winnipeg, Hamilton, Toronto and Montreal (see http://legacy.canadianmennonite.org/vol08-2004/8-05/widerchurch.html). I believe the Hamilton unit closed soon after, but Danforth Mennonite Church (Toronto) maintained its unit until 2011, and Montreal Mennonite Fellowship's unit was still active in 2012.

I believe there are still active units in Lethbridge, Edmonton and Winnipeg (http://www.mvsa.net/units).

Thank you for this helpful clarification, Jeremy. Much appreciated.