A search for common ground

The Ojibway word for medicine is mush-ki-ki, meaning “strength of the earth” or “power from the soil,” explained David Daniels of Long Plain First Nation, located near Portage La Prairie, Man., in First Nations Voice some years ago.

More recently, Daniels has been working in collaboration with Morden researcher Jason Dyck to trace the paths of medicinal practices in Manitoba Mennonite and Ojibway communities, in a search for common ground.

The idea for their research sprang from a medicine chest currently housed at the Mennonite Heritage Village Museum in Steinbach. Once the property of a Russian Mennonite homeopath, Aeltester Franz F. Enns (1871-1940), the chest contains preparations of local medicinal plants, which led Daniels to believe it might point to common practice—and perhaps even shared knowledge—between Manitoba’s Ojibway and early Mennonite settlers.

While Daniels and Dyck were unable to positively confirm that Ojibway knowledge influenced the contents of Enns’s medicine chest, Dyck is quoted as saying in a March 20 online story of the southeastern Manitoba publication The Carillon: “What is for sure is that [Ojibway and Mennonite Manitobans] did use common healing ingredients. Some of the plants that they used in those remedies were also held in common.”

Their inquiry is not the first of its kind. For some time, scholars and lay people alike have been conducting research into historical cooperation between Mennonite and indigenous healers in Manitoba. According to provincial documentation, the Ojibway and Mennonites in Manitoba have been drawing strength from the earth and power from the soil together since the early 1900s. One of the earliest known instances of this revolves around a woman named Elizabeth Russel.

According to Conrad Stoesz, an archivist for Winnipeg’s Mennonite Heritage Centre, Russel was an indigenous healer who lived in the East Reserve area around the turn of the last century. She is known to researchers today as a “cancer specialist.” Stoesz cites an article from the Preservings newsletter of June 1997 that tells the story of Katherina Hiebert (1855-1910), a Mennonite midwife brought by her husband to the home of a local indigenous woman for breast cancer treatment. While the indigenous healer is not named in Preservings, Stoesz notes that Joe Wiebe, a contemporary researcher on historical indigenous-Mennonite connections, has recently theorized that the woman in question was none other than Russel herself.

What is known for certain is that the wise-woman’s treatment worked. Having applied poultices made by hand from various herbs gathered in the area, an abscess soon developed on the affected area, which she drained, and Hiebert was “cured” of her cancer.

Two local healers, speaking two different languages, both serving their communities. One of them, in this instance, crossing cultural divides to help the other in service of the calling they both owned. Hiebert’s and Russel’s stories are now more than a century old, but their experiences, and those of other women like them, are still remembered.

Stoesz recalls an instance from a local conference on indigenous-Mennonite relationships in 2000. There, an unnamed local woman told a story about her grandmother, an indigenous midwife, and a Mennonite friend of the family, known only as “the Missus,” who was also a local healer. While the two women did not speak the same language, she said that they spent time together regularly, picking herbs, making and exchanging medicines, and sharing meals as well. Sometimes they even attended births together, she said, working as a team to serve the labouring women of the community. 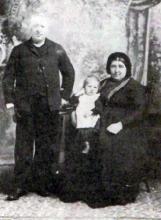 My dad talked a lot about the Métis midwife that would come out to their place to birth all of his siblings there at the house. She had a single long, thick braid down her back, floor-length skirts, and smoked a corncob pipe. She first delivered my dad (the oldest) at the Freemason's "hospital" in Morden (now is the retirement home), and then started coming out to the farm for Grandma's subsequent children. That would have been 1928-1940.