The future of MCC

Can it remain a vital link to the global village? 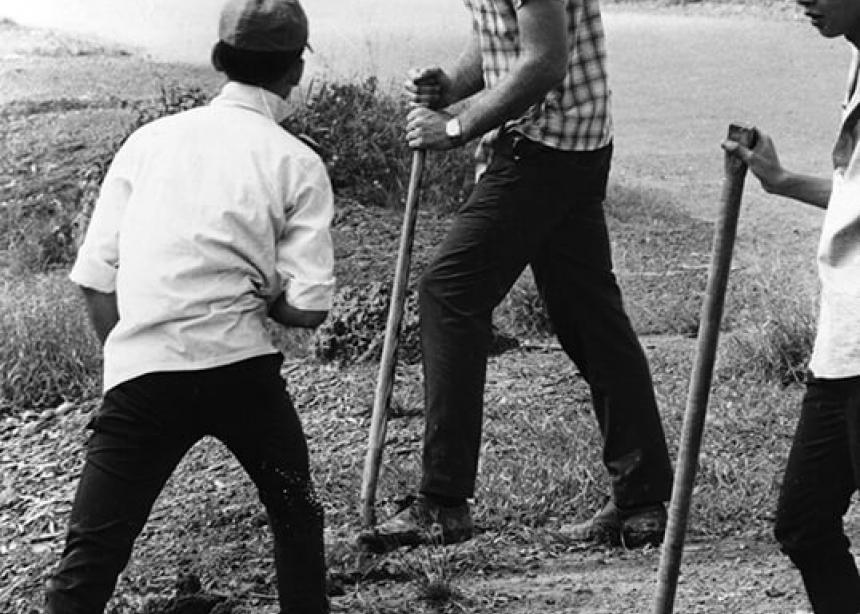 <p>In 1967 Gary Dewarle of Saskatoon (in the checked shirt) helped to build a road at a refugee camp near Saigon, South Vietnam. (Mennonite Archives of Ontario photo)</p>

Mennonite Central Committee (MCC) has long been part of the DNA of the North American Anabaptist church, linking us to the world and providing a sense of relation to “the least of these.” It has served as an informal seminary, immersing thousands of us in realities that have enriched us and, in turn, enriched our friends, family and the church. But that is changing.

In 1976, MCC had about 300 North American Mennonites serving overseas. Today, that number is closer to 150. Meanwhile, the overall number of North American Mennonites has doubled, further diluting the leavening influence of people with MCC experience abroad. (Throughout the decades roughly a third of MCC personnel have been from non-Anabaptist churches; the above numbers do not include those people.)

MCC has good reasons for placing fewer North Americans abroad. It has moved toward hiring more local staff (e.g. Bolivians working in Bolivia). In 1976, MCC had 21 non-North American staff. That figure has increased dramatically. Last year MCC personnel included 302 Americans, 346 Canadians and 359 citizens of other countries working either in North America or abroad. (As interesting as non-North Americans topping the list is the fact that the U.S. comes last, even though there are almost four times as many Mennonites in the U.S. as Canada.)

In many cases it is both cheaper and more effective for MCC to hire local people abroad as they have knowledge and connections that give them an advantage. It is also a part of a move away from the colonial model of North Americans descending as saviours.

However legitimate the reasons, this shift changes the extent to which MCC promotes a collective sensitivity to the global village. Of course, MCC can foster awareness of global realities through learning tours and by bringing foreign partners to our churches, but the results will not be as profound as when people deeply rooted in our churches spend extended periods in other cultures.

It could also be noted that MCC does more work in North America than it used to, better connecting us to the margins in our own countries. (Though volunteer service placements in Canada have virtually disappeared.)

It should also be said that relationships between development workers and locals, while of great value, can also be tainted by a giver-receiver hierarchy, economic disparity and cross-cultural slippage.

Still the reduction in North Americans going abroad deserves consideration. While it may be tempting to welcome the shift as a natural internationalization of MCC, that notion is offset by the growth in salaried positions in North America, from 112 in 1976 to 432 last year. All of the overall growth in MCC personnel over that period—from 731 to 1,007—can be seen as an increase in paid staff in North America. (According to tax filings, 19 MCC staff across Canada made over $80,000 last year.)

Through the shift in MCC, the organization has remained the envy of its peers in terms of its ability to raise money. That said, some angst looms. Will thrift stores, which bring in a considerable chunk of the MCC budget, continue to thrive despite a dramatic increase in the average age of volunteers? Will budgets remain strong even as fewer and fewer big donors replace larger numbers of small donors? According to MCC Manitoba director Ron Janzen, roughly 90 percent of donations now come from about 10 percent of donors. Translation: fewer people have MCC in their DNA. While it is difficult to demonstrate direct links between this narrowing of the donor base and the reduced numbers of North American Mennonites serving with MCC, it would be foolish not to recognize an overall weakening of the web of intercontinental relationships that has long formed the foundation of MCC.

I am reminded of a study done by another North American development organization in which low-income Latin Americans were asked whether the organization should send volunteers to help build houses or just cash for houses. They chose the volunteers, even though it would mean fewer overall houses built because more of the budget would go toward travel. They wanted the connection.

Without reading too much into that finding, and without glossing over the complexity of cross-cultural relations, I think it points to what is at the core of MCC: relationship.

MCC has become more sophisticated in how it addresses poverty; perhaps that evolution needs to be accompanied by new ways of building the web of deep international relationships. Or perhaps Mennonite World Conference can step into that gap, creating relationships founded on something more sustainable than an us-helping-them narrative.

In 1967 Gary Dewarle of Saskatoon (in the checked shirt) helped to build a road at a refugee camp near Saigon, South Vietnam. (Mennonite Archives of Ontario photo)

Thanks Will for this commentary. Something a lot of us who have served in MCC have pondered. My wife & I served in Ethiopia from 2007-2011 as MCC Country Reps and saw a creeping attrition of moving Mennonite volunteers out and professionalizing the personnel coming in. Not all can be blamed on Akron or Winnipeg, countries like Ethiopia have made it increasingly difficult to obtain work visas. But the point is that we will lose the personal connection with partners and friends overseas and that is the real loss.

Will,
My experiences as an MCC "trainee" farm worker to Switzerland and Germany 1984-85 support your premise. I feel a part of MCC in ways that simply would not be otherwise. Living in a different culture also helped form my identity as an Amish-Mennonite. My US view of the political world became more nuanced, and the course of my life was significantly changed because of my relationships with different languages, people and ideas. My MCC year abroad was a great privilege. I wish every young person could have that sort of transforming experience.

I understand the arguments for being efficient with relief and development dollars, and find colonial methods very troubling, but I am sad to know that MCC opportunities for shoulder-to-shoulder relationships are waning. Aid dollars have their place, but we truly improve our world one challenging, messy, beautiful relationship at a time.

Thank you Will for an insightful article. Issues that I am also sure MCC management and boards are pondering. I think we must also consider that even if North American MCC constituency people were coming to MCC saying 'here I am, send me', as they did in the 1950-70's, there is often no place to send them. The environment in much of the 'developing' world has changed and I think rightfully most countries are concerned with preserving jobs for their own citizens. To get work permits one needs to be filling very specialized jobs and have the credentials to support that. Perhaps we also need to reconsider how MCC works internationally. MCC international workers are being spread increasingly thinly over fifty plus countries. Should MCC be focusing on less countries also allowing for the increased professionalism required by relief and development agencies to be present in much of the world today. This reality re-enforces your concern about what is at the core of MCC: relationship. The future role of MCC is indeed in question. New creative ideas for linking to the global village are required. Peter Woolner, MCC Ethiopia co-rep with Cath Woolner