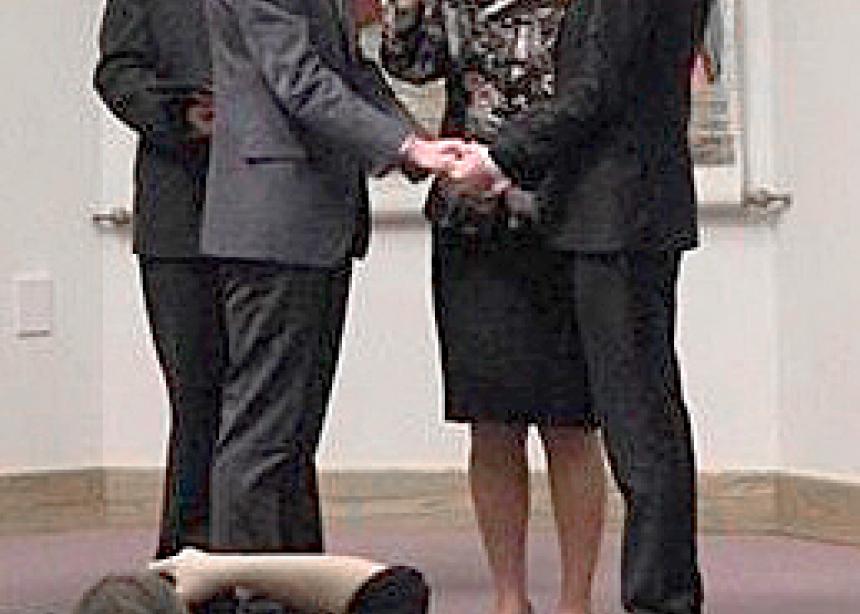 Craig Friesen and Matthew Wiens rang in 2015 by joining their hands and committing their lives to one another in front of friends and family at a New Year’s Eve wedding, the first same-sex wedding to ever be publicly officiated by Mennonite Church Canada pastors.

Wiens and Friesen, who attend Nutana Park Mennonite Church in Saskatoon, were married by their co-pastors Anita Retzlaff and Patrick Preheim, at Osler Mennonite Church, where Friesen is a member.

It was important for Friesen and Wiens to be married in a Mennonite church, even though it isn’t publicly welcoming of lesbian/gay/bisexual/transgender/queer (LGBTQ) couples. Despite the denomination’s stance—whose Confession of Faith in a Mennonite Perspective states, “We believe that God intends marriage to be a covenant between one man and one woman for life”—the couple couldn’t believe the amount of support they received from friends, family and their faith community.

“It felt like a big deal because we had all these people here overwhelmingly and unequivocally supportive of our relationship,” says Friesen. “It was so powerful.”

Nutana Park Mennonite didn’t become welcoming overnight, however. According to members, this marriage is the outcome of a process that spanned nearly 20 years, through a gradual and intentional culture shift.

It began to take shape because of Connie Gutwin, who has attended the church for more than 30 years. Her daughter Catherine is a lesbian, and although she doesn’t attend church, Gutwin felt it important for the church to welcome those who are same-sex attracted.

Ten years after Catherine came out, Nutana Park began adult education classes on same-sex relationships that drew LGBTQ people and their friends and family from all over the province.

Seven years later, the church sent a letter to MC Saskatchewan’s pastoral leadership committee stating its intention to engage all members of the church fully in all aspects of church.

According to Trish St. Onge, Nutana Park’s congregational chair, the assumption was that this included marriage, although it wasn’t stated in so many words. “There were subtle cultural shifts over the years that came together that allowed us to confidently make that statement,” she says.

Retzlaff believed so strongly in Nutana Park’s welcoming statement, she says she was ready to put her career on the line if that was what it took.

Members of the congregation believe it was a profound moment of courage.

In October 2014, the area church’s pastoral leadership commission released a statement in response to questions throughout the province wondering what would happen to pastors who perform same-sex marriages. The commission said individual congregations can decide if they will marry same-sex couples or not, and that no action will be taken against pastors for doing so.

The statement asks that “respect and kindness be demonstrated, regardless of the perspective taken, and that sensitivity be shown to persons and families involved in same-sex marriages who find themselves in the centre of this disagreement.”

According to Willard Metzger, executive director of MC Canada, the denomination is at different points in its Being a Faithful Church process, a time of discernment that is looking at issues of faithfulness, including in areas of human sexuality. “Individual congregations may need to respond to their specific ministry contexts before the discernment period is completed,” he says.

For Nutana Park, that meant marrying Friesen and Wiens, who they felt were ready to commit to each other and their faith community after getting engaged last year.

“Craig and Matt are a gift to our congregation, to MC Saskatchewan, to MC Canada, and to the kingdom of God,” Preheim says.

Hope for the future

Friesen and Wiens say their church experiences have generally been positive, and their church communities mostly open and accepting of their same-sex attraction.

“We’ve been really lucky to live in the city where there are two affirming churches,” Wiens says. Friesen grew up attending Osler Mennonite, which is also welcoming.

But that’s not the experience of many LGBTQ people, they say. Wiens and Friesen aren’t sure if their marriage will trigger change in their area church or the denomination as a whole, but they do hope it will inspire hope in the LGBTQ community.

Despite differences of opinion across the country, the couple hope churches will refer vulnerable LGBTQ people to welcoming churches like the ones they attend. They also hope that more congregations will come out as being publicly affirming, not just privately.

“It would be wonderful if one day silence was enough,” Wiens says, “but I think that we have to recognize that positive action is required at the moment.”

“There’s a history of the church being really oppressive,” Friesen adds. “The silence still oppresses.”

Being a Faithful Church (BFC) documents 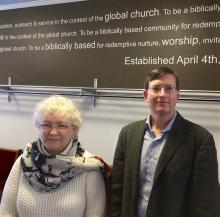 Congratulations Craig and Matt!
Thank you Anita and Patrick!

I am confident that we are going to repeat history, since we have not learned from it the first time. Here we go again, Sodom and Gomorrah.

Acceptance that some people are naturally gay or bisexual has been steadily growing in society and in religion. Establishing gay rights, including the right to marry, is more progress. Thus, I wish the newlyweds all the best, like any couple.

I am so happy for Craig and Matt, and I am very happy also to attend Osler Mennonite Church.

Has the Mennonite Church in Saskatchewan abandoned their statement of faith?
That statement clearly states that it upholds the biblical standard of marriage as between one man and one woman.

It's all well and good when non-believers accept sin as normative and even right. It's an entirely different thing when believers (or unbelievers posing as believers) begin to call evil good and good, evil.

May God grant repentance to this "couple" and the church and denomination which have chosen to call this sinful action, good.

GOD created ADAM and EVE,
NOT ADAM and STEVE !!!

But what does that saying mean?
Does it mean God didn't create some people? That some were an error? That it is possible that some people are not God's children? I accept none of that.

Barbara, I am guessing that your questions are about what I said.
No, it does not mean that God didn't create some people.
No, it does not mean that some people were a mistake.
However, we must accept the truth that God tells us in His word, the Holy Bible.
The apostle Paul wrote to the church at Corinth, "do you not know that the unrighteous will not inherit the kingdom of God? Do not be deceived. Neither fornicators, nor idolaters, nor adulterers, nor homosexuals, nor sodomites, nor covetous, nor thieves, nor drunkards, nor abusive people, nor swindlers will inherit the kingdom of God." (1 Corinthians 6:9-10)
Jesus Christ told Nicodemus that, "Most assuredly, I say to you, unless someone is born again, he cannot see the kingdom of God." (John 3:3) He then explained what he meant by being born again, “That receiving birth from the flesh is flesh, and that receiving birth from the Spirit is spirit.” (John 3:6) Clearly, all humans need to be born again spiritually of God in order to be His children.
Then, “...if anyone is in Christ, that one is a new creation; the old things have passed away; behold, all things have become new!” (2 Cornthians 5:17). When a person is born again spiritually, all sin and corruption are dealt with and they are re-created with a new godly nature. “As His divine power has granted to us all things pertaining to life and godliness, through the knowledge of Him who called us by glory and virtue, through which have been given to us precious and exceedingly great promises, so that through these we may become partakers of the divine nature, having escaped the corruption that is in the world through lust.” (2 Peter 3:3-4)
Paul followed what I quoted above by saying, “And such were some of you! But you were washed, but you were sanctified, but you were justified in the name of the Lord Jesus and by the Spirit of our God.”
The good news for all humans is that you can be forgiven of your sin and born again spiritually as a child of God with a new nature. God can and will change you and make you perfect!

For those who need to get it right and use rules to judge:
Love God and love each other. Don't proceed with vain interpretations if you don't radiate love, and toss in living the grace of Christ, too. God doesn't need to be defended, just as love doesn't.
Let's celebrate a marriage. That's a loving thing to do, and let go of the fears.
Besides, I know Craig and Matt, and I'm happy for them. It's hard to imagine strangers criticizing a marriage. What is so important to do such an unloving thing?