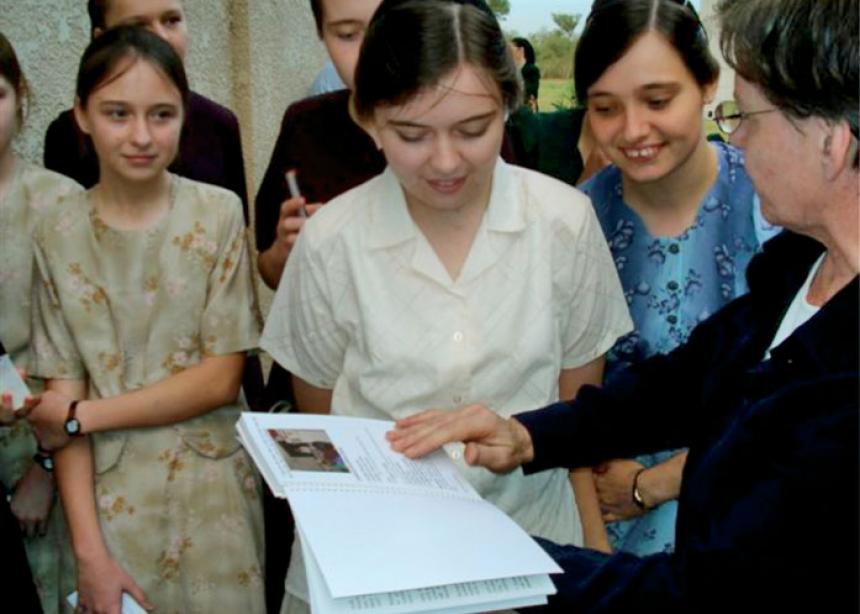 <p>During a trip to Bolivia earlier this year, Helen Funk, a Winnipeg-based Low German radio host, distributes her Low German cookbook, Met Helen en de Kjäakj/With Helen in the Kitchen, that she wrote at the request of Bolivian colony listeners.</p>

Despite tragic reports of sexual assault, alcoholism and drug use among Old Colony Mennonite communities in Bolivia this past year, there are many good things happening there, which offer hope for a better future.

That’s the opinion of Helen Funk, a Winnipeg-based Low German radio host for Family Life Network who spent two weeks on a ministry-related trip to listeners there earlier this year.

The Mariposa Women and Children’s Shelter at Pailon is now open and offering counsel and support for victims of abuse.

“We were very encouraged by what is happening there,” says Funk, noting that “it was a joy to meet some of them, to look into their eyes and tell them how much we here in North America care about them. At the same time, my heart was crumbling to the ground at times, hearing what had happened to mothers and girls [and] about what they now have to deal with in their lives.”

Also encouraging are plans to build an alcohol treatment entre for men this year (see “Bolivian Mennonites support services for addictions, abuse,” page 15), and upgrading the school at Villa Nueva Colony to Grade 12, so that graduates will meet university entry-level requirements.

Perhaps most inspiring of all, in Funk’s opinion, is the deep hunger for spiritual learning combined with a yearning to reconnect with other Mennonites after years of isolation. This was evident, she says, as “many” girls and women came out and asked for the Low German cookbook, Met Helen en de Kjäakj/With Helen in the Kitchen, that she wrote at the request of colony listeners, with printing costs covered by North American Mennonites. The cookbook includes not only recipes, but prayers and meditations as well. Some women had heard about these books while listening to Funk’s radio broadcast in secret—such “learning” is frowned on by some colony elders—then came out after dark to greet Funk and pick up the materials.

“Those 100 donated cookbooks were gone the first week,” says Funk in exultation, expressing thanks to those who helped defray the cookbook costs.

A two-week Bible school for adults and children also reflected an eagerness to learn; up to 310 students attended and 500 came for the closing program.

“For the first time, 50 students, including whole families, from the Tress Cruces Colony, attended,” Funk says. “We hired a grain truck to bring them in. . . . They all had to stand, but they didn’t mind at all. For many, it was the first ride ever on rubber tires. And then to come to meetings where a nutritious supper was served for everyone! Plus all the exciting stories, crafts, songs and Bible verses that were learned, were just like heaven to many!”

One man, Jacob K., his wife and nine children, came to the Bible school on the truck every other day, even though he told Funk that colony bishops said he must repent of this sin or he would be dismissed from their church. However, Funk says that this “very smart young man,” who she feels is a potential leader of colony people, “is eager to do God’s will and obey God more than people,” so he kept coming. She was later saddened to learn that he was, in fact, excommunicated.

But, concludes Funk, “there are at least seven evangelical churches with whom we work closely whenever we go to Bolivia, who are working diligently to walk with people like Jacob, to teach and train them to walk in the way of our Lord. Pray for the present generation. We have great hope for the next, because so many good things are happening here now.” 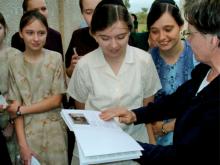 During a trip to Bolivia earlier this year, Helen Funk, a Winnipeg-based Low German radio host, distributes her Low German cookbook, Met Helen en de Kjäakj/With Helen in the Kitchen, that she wrote at the request of Bolivian colony listeners.

Appreciating the commitment you put into your ministry their in Bolivia. It's a great opportunity to read this article on how God is working in each and everyone's life. I will pray for the present generation that through that ministry many will become leaders.