‘I don’t have to prove anything’ 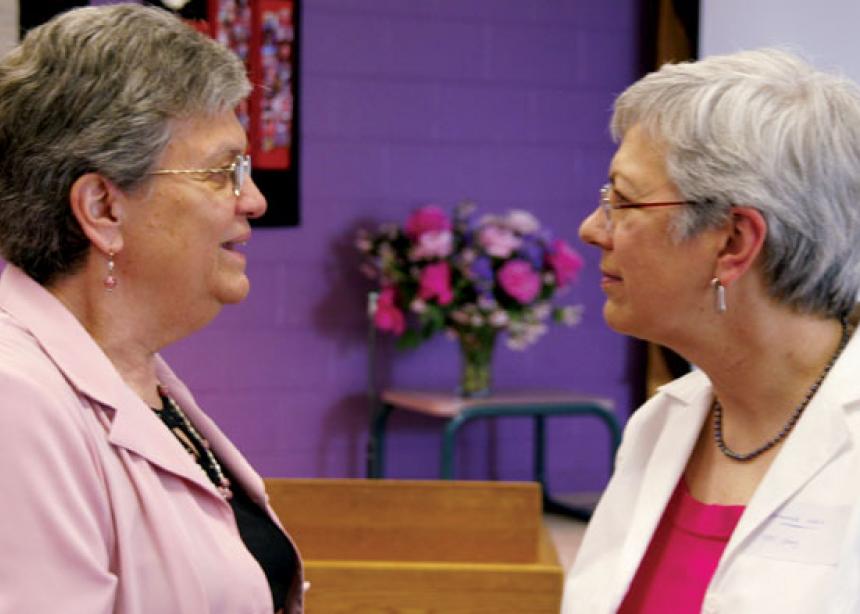 Grieved at not being allowed to go on to high school, she found the traditional women’s roles of the 1950s stifling. After becoming a registered nursing assistant, she began attending Hagerman Mennonite Church in the then Mennonite Conference of Ontario and Quebec (MCOQ). From 1960-63 she studied at the Ontario Mennonite Bible Institute in Kitchener, a winter Bible school that spawned many leaders.

Time in Basel, Switzerland, with the Intermenno Trainee Program opened her eyes to the wider Mennonite world and whetted her appetite to learn more. At 28, she was accepted as a mature student at Goshen College, Ind.

She especially appreciated Millard Lind, who asked her as her time at the college neared the end, “Have you ever thought of going to seminary?” When she laughed and asked why, he replied, “Because I see potential in you.”

In 1971, she began her studies at Goshen Biblical Seminary. But even a summer internship at the Oak Grove Mennonite Church, Ohio, didn’t change her thinking that “the Mennonite church doesn’t use women.” John Howard Yoder challenged her to prove that women could do ministry. “Prove it?” she retorted. “I don’t have to prove anything. If I’m called into ministry I’ll accept the call, but I’m not going into ministry to prove women are able.”

After taking on a chaplaincy assignment in Colorado, Oak Grove called and a year later she went back there on staff. Smith Good never argued for women in ministry from the pulpit; instead, she allowed her ability and call to show themselves through her work, finding that even the most vocal critics were won over in time.

After pastoring at Hively Mennonite in Elkhart, she explored a position with Stirling Avenue Mennonite Church, Kitchener, Ont. She recalls that half the interview was taken up with questions about the Bible and women in ministry.

Following a pastorate at Hillcrest Mennonite, New Hamburg, Ont., she took some time off to adjust to the new task of parenting after marrying Gerald Good, a widower with four daughters.

While pastoring at Guelph Mennonite Church, Ont., she was given the freedom to pursue a doctor of ministries degree. The congregation also wanted to ordain her for ministry.

This was one of the “hard” parts on her path, as there seemed to be resistance from the conference. At a meeting to discuss this she was told, “It’s not because you’re a woman.” To which she responded, “So we’ve laid that one to rest. What then is the reason to not ordain me?” After more discussion she said, “I’ve heard no reason to not ordain me, so I’ll wait for you to set up a time for the interview.”

Nice to rediscover/reread this article about Martha. Just a note of correction: I don't know if it can be changed now, but the name of the other woman in the photo has been misspelled. Her name should be "Johanna Wall", not "Joanna Wall". She is my wife and never bothers to correct such matters but I think it important.
thanks,
Tim

The name correction has been made.